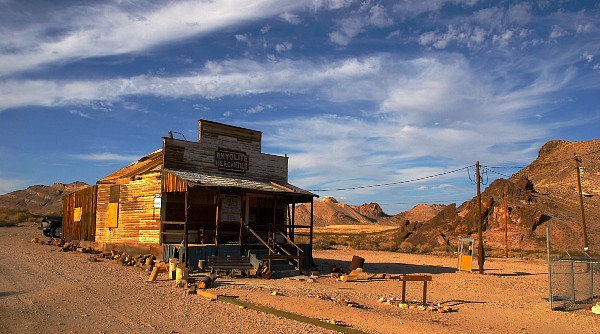 In this below-sea-level basin, steady drought and record summer heat make Death Valley a land of extremes. Yet, each extreme has a striking contrast. Towering peaks are frosted with winter snow. Rare rainstorms bring vast fields of wildflowers. Lush oases harbor tiny fish and refuge for wildlife and humans. Despite its morbid name, a great diversity of life survives in Death Valley.

The largest national park outside of Alaska, Death Valley is an almost unfathomable place. The park’s 3.3 million acres /1.34 million hectares encompass mountain-size sand dunes, below-sea-level salt flats, mysterious singing rocks, and colorful sandstone canyons. Extremes are the norm: Death Valley is the hottest and driest place in America, with summer temperatures peaking above 120 F°/49°C, and an average rainfall of 2 inches/5 cm per year. Also extreme are the park’s elevations: Badwater Basin, the park’s lowest spot, rests at 282 feet/86 meters below sea level while Telescope Peak soars to 11,049 feet/3,368 meters. So go high, or go very, very low; get hot, or chill out with amazing desert vistas. Death Valley delivers on every end of the scale. 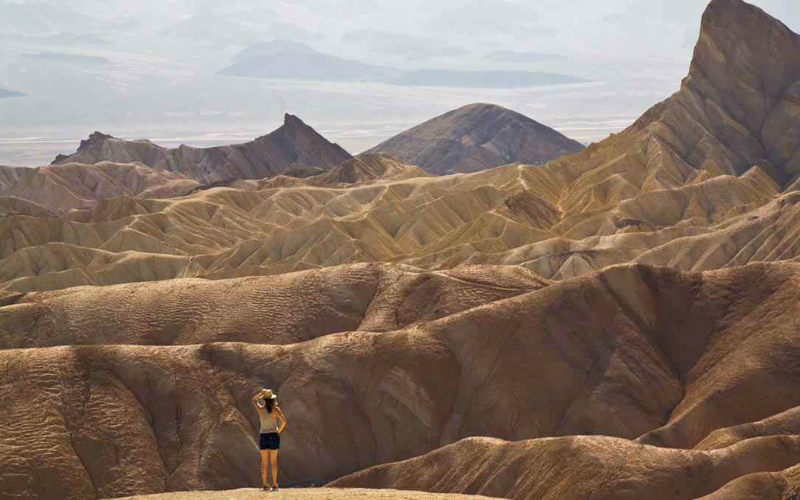 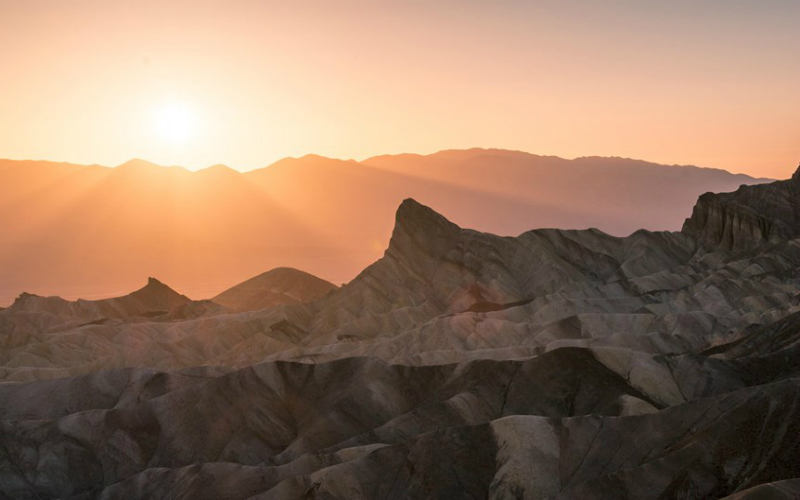 Every imaginable shade of gold–from orange to apricot to school-bus yellow–is visible in the wrinkled Golden Canyon cliffs, whose folded and eroded layers glow at sunrise and sunset. Pick your favorite perspective: Drive to Zabriskie Point and survey the scene from on high, or see the vibrant beauty up close by hiking in Golden Canyon. For casual sightseers, Zabriskie Point (off Hwy. 190) offers a stunning view of the multi-hued badlands from a 100-yard-long paved trail.

It’s one of the park’s most photographed viewpoints and a busy spot at sunset. The Golden Canyon hike starts from the opposite side (off Badwater Road, 3.5 miles/5.6 km southeast of the visitor center). It’s a moderate out-and-back of about two miles, which can be extended into a 5.5-mile/9-km loop. From the parking area, the trail heads gently uphill through soft canyon walls colorfully banded in yellow, beige, and cream, which signifies the presence of different minerals. Be sure to go the extra few steps to Red Cathedral, a towering cliff colored red by the weathering of iron-rich rocks. 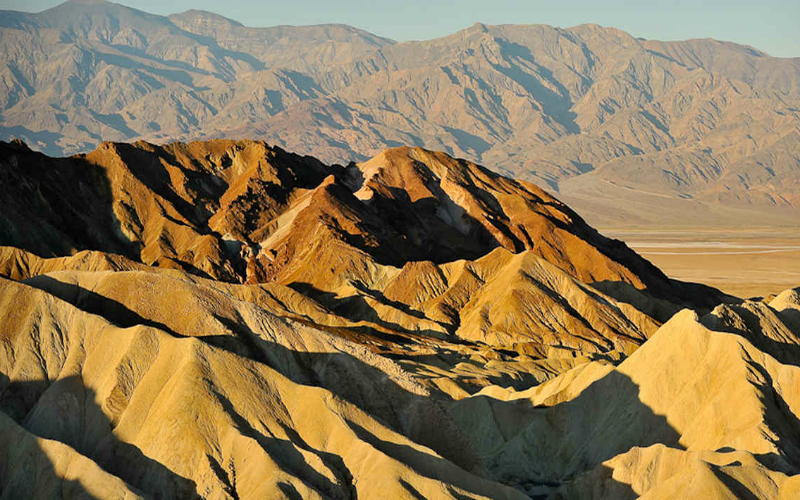 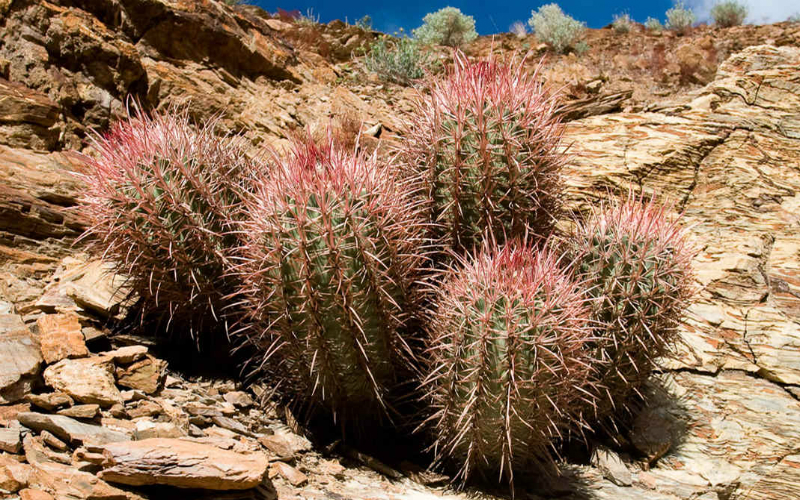 Mosaic Canyon is one of the scenic highlights of Death Valley, and its marbled narrows are navigable for all ages. The trail shows off plenty of colorful slick rock and polished marble as it winds up a narrow, high-walled canyon. Eons of time and countless flash floods have ground and polished its walls into the kind of marble you might covet for your home’s bathroom tile. Embedded in the walls are vivid examples of Mosaic Breccia, multicolored rock fragments that look like they’re cemented together. Keep walking to discover smooth walls that narrow and widen, and ultimately end at a dry waterfall.

No trip to Death Valley would be complete without a visit to Badwater, the lowest point in North America, which tips the altimeter at 282 feet/86 meters below sea level. Its vast expanse of salt flats and salty puddles were a terrible disappointment to thirsty emigrants who crossed this desert in the 1800s in search of a better life. The salty puddles—which can become large ponds following a big storm, are all that remains of a lake that was more than 600 feet/183 meters deep hundreds of thousands of years ago. All that’s left now is a surreal tract of crunchy salt crystals. 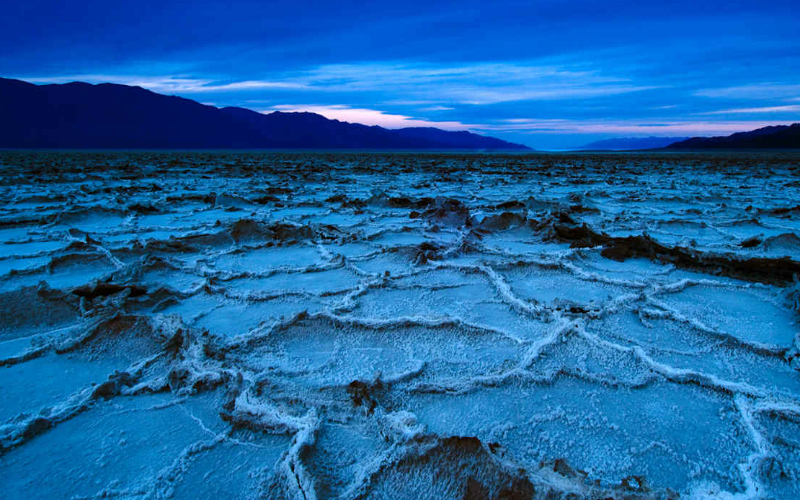 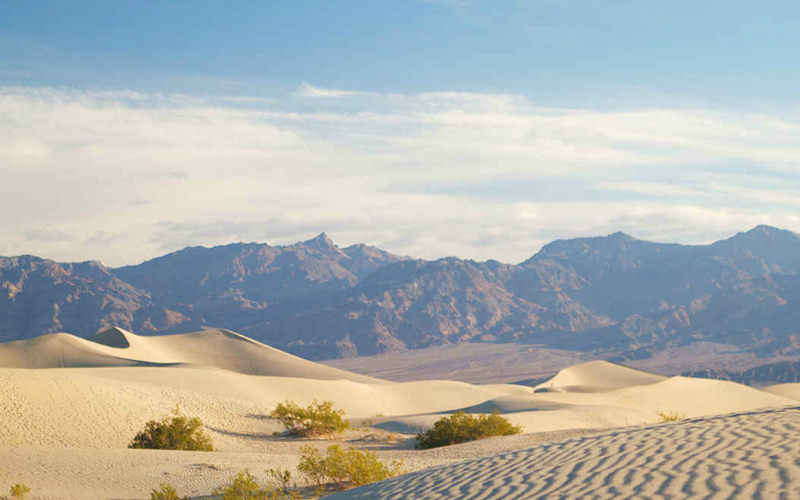 Nothing makes a better introduction to Death Valley than a visit to the 100-foot/30-meter-high Mesquite Flat Sand Dunes. These aren’t Death Valley’s tallest sand dunes (those are the Eureka Dunes, which require 4WD to reach)—but they are the most accessible.

Just down the road from Badwater is the turnoff for Artist’s Drive, a scenic 9-mile/14.5-kilometer road that shows off the colorful hues of the Amargosa Range’s sedimentary hills. If possible, time your visit here for late afternoon, when the artist’s multi-hued palette—pink, mauve, gold, green, lavender—is the most vivid.

Check out the names on a Death Valley map: Funeral Mountains. Last Chance Range. Coffin Canyon. Deadman Pass. They don’t sound like places where living is easy. Indeed. North America’s hottest and driest place, which gets less than two inches of rain per year and bakes in blistering summer temperatures, harbors over 400 animal species and over 1,000 types of plants. The key is their adaptations—the evolutionary hardwiring that prepares them for Death Valley’s extremes.

The park’s largest native animals, Desert Bighorn Sheep are always on the move, despite hauling some heavy baggage—up to 30 pounds of curling horns on full-size males. Even though bighorns are big—up to five feet long and three feet tall at the shoulder—they are nearly invisible when standing still, thanks to fur the color of desert sand. One of the best places to look for bighorns in Death Valley is in Titus Canyon, where a year-round freshwater spring serves as a watering hole for sheep and other animals. However, you’ll need a 4WD with high clearance to drive it without the risk of getting stuck, which could be dangerous when you’re deep in the park with no cell reception. 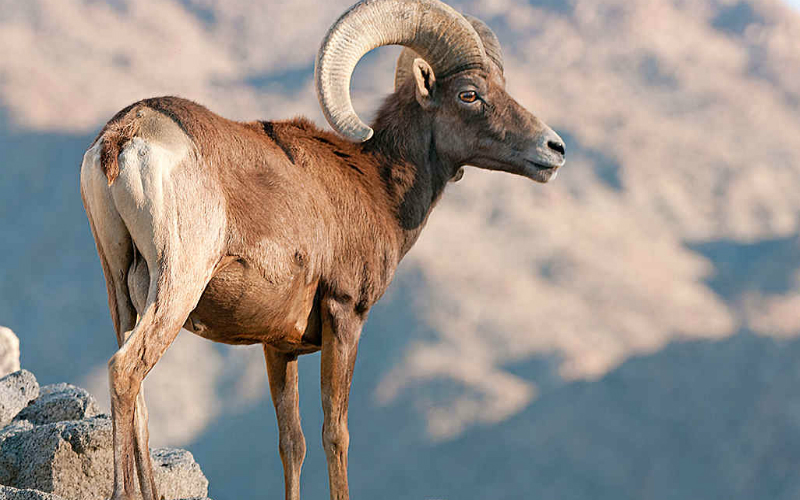 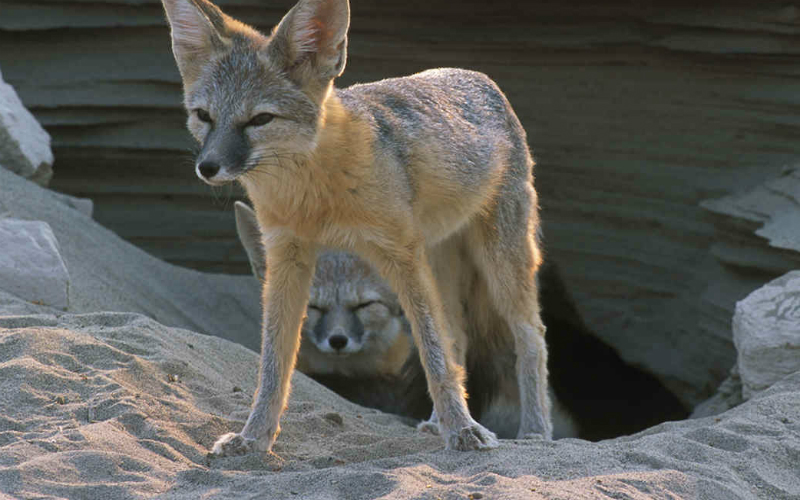 The Desert Kit Fox is one of Death Valley’s most endearing creatures, a member of the dog family that often seems as tame as a family pet. They will come right up to people, especially in the campgrounds.

The Greater Roadrunner, a well-loved icon of the American Southwest, maybe one of the most entertaining and easily spotted creatures in Death Valley, often seen around the developed areas of Furnace Creek and Stovepipe Wells. But don’t let those comical looks fool you. The lanky, foot-tall bird with the rumpled hairdo, a member of the cuckoo family, is actually a ferocious hunter and carnivore. 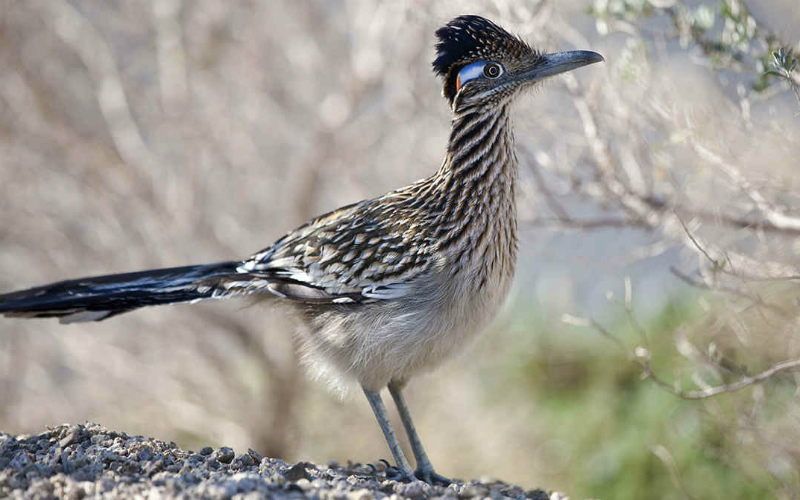 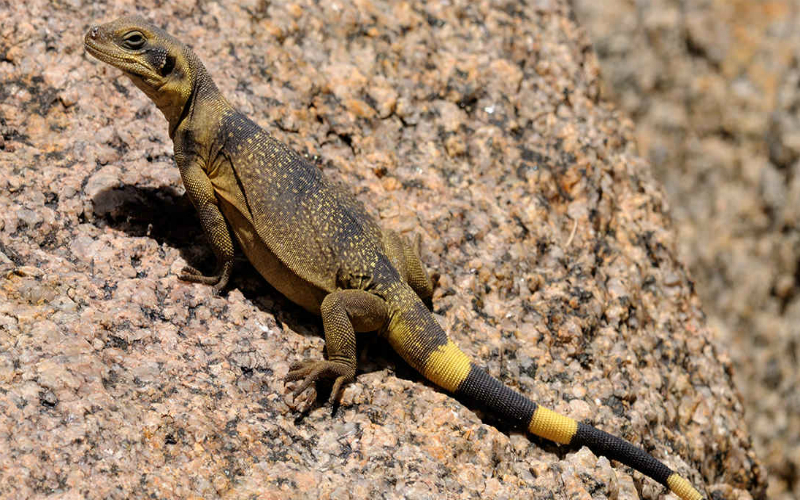 More than a dozen types of lizards live in Death Valley, and they scurry and scramble all over trails, rocks, and even dunes.

Death Valley made a splash in February 2016 when parts of the usually barren desert burst into a riot of wildflowers—a rare event known as a super bloom. The flowers’ rare blaze might be an awesome photo op for humans, but it’s actually a sophisticated survival strategy for the plants. Rather than battle the heat every year, wildflower seeds lie dormant underground and pop out only under perfect weather conditions. 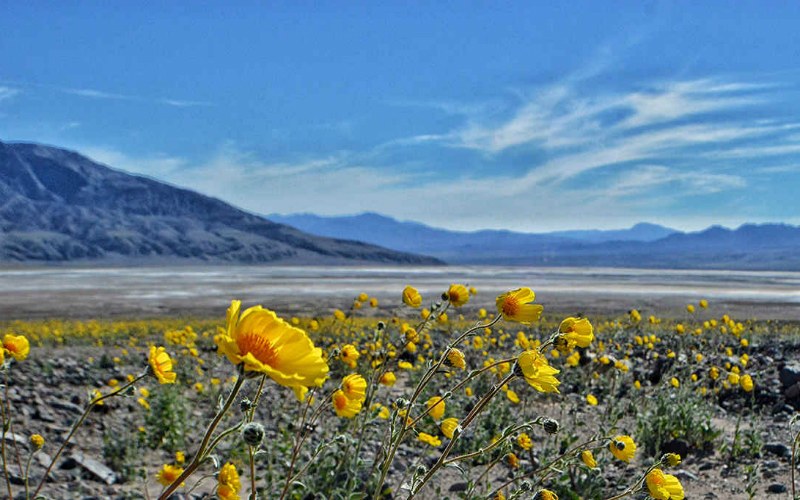 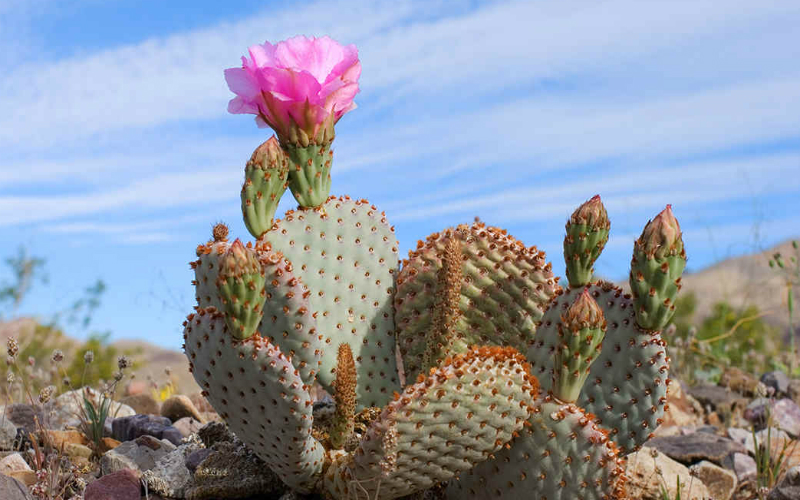 Still, even in normal years, Death Valley contains a fascinating array of flora that is cleverly adapted to thrive, from taproots that extend 60 feet into the earth in search of water to tiny leaves and stems that slow evaporation.

It’s hard to imagine a cactus not growing in the desert, but that’s the case in Death Valley’s most extreme settings. The rocks-hot-enough-to-fry-an-egg heat, severe drought, and dangerous buildup of salts in the lowest parts of the valley make it too tough for even a hardy cactus to grow. But head for the hills to more cactus-friendly conditions to discover these prickly succulents. Visit in spring and catch their showy flowers—some of the prettiest in Death Valley. 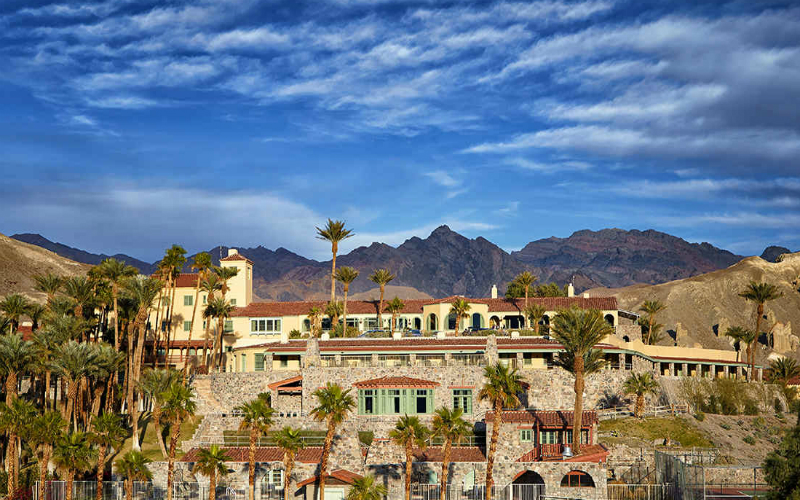 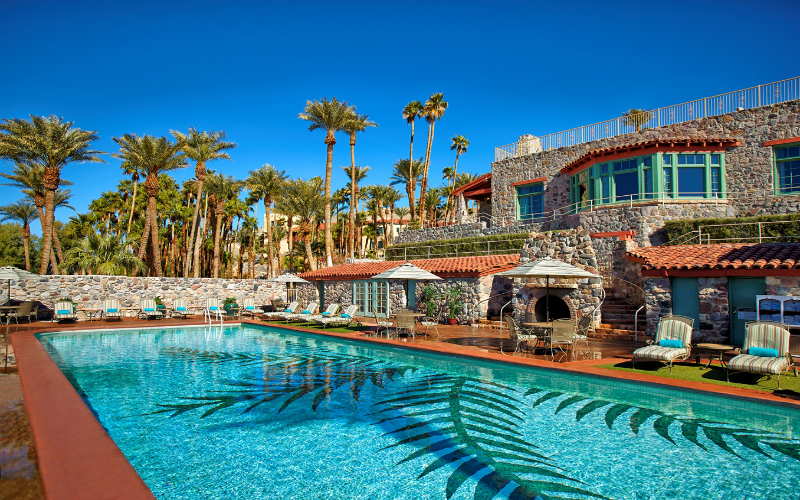 Pool at Inn at Death Valley

The historic Inn at Death Valley (formerly known as the Inn at Furnace Creek Resort) was built for roundabout reasons—the Pacific Coast Borax Company financed its construction as a means to save the company’s Death Valley Railroad after the borax business slowed. In the days before cars were common in the desert, many Hollywood stars rode the train to this desert getaway. The railroad didn’t survive the changing times, but this lovely hotel has aged gracefully since 1927.

Designed by a Los Angeles architect who took his inspiration from California’s Spanish missions, the 66-room inn is perched on a hill facing west, its stone patios offering views of Death Valley and the Panamint Mountains. Red tile roofs and stucco walls glow in the afternoon sun; palm trees sway and water fountains burble. Outdoor fireplaces flicker and glow around the edges of the spring-fed swimming pool.

Other Lodging may be found at three more resorts located in the central part of the park: Furnace Creek Ranch and Inn, Stovepipe Wells, and Panamint Springs. Additional lodging and dining opportunities can be found in communities outside the national park. 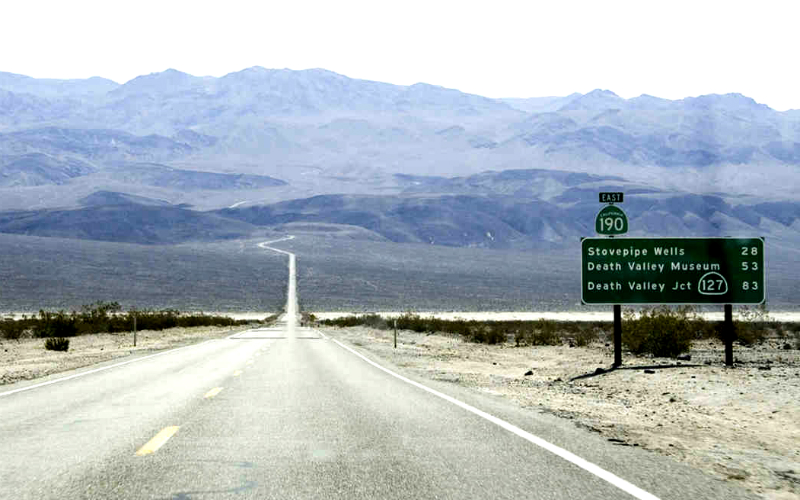 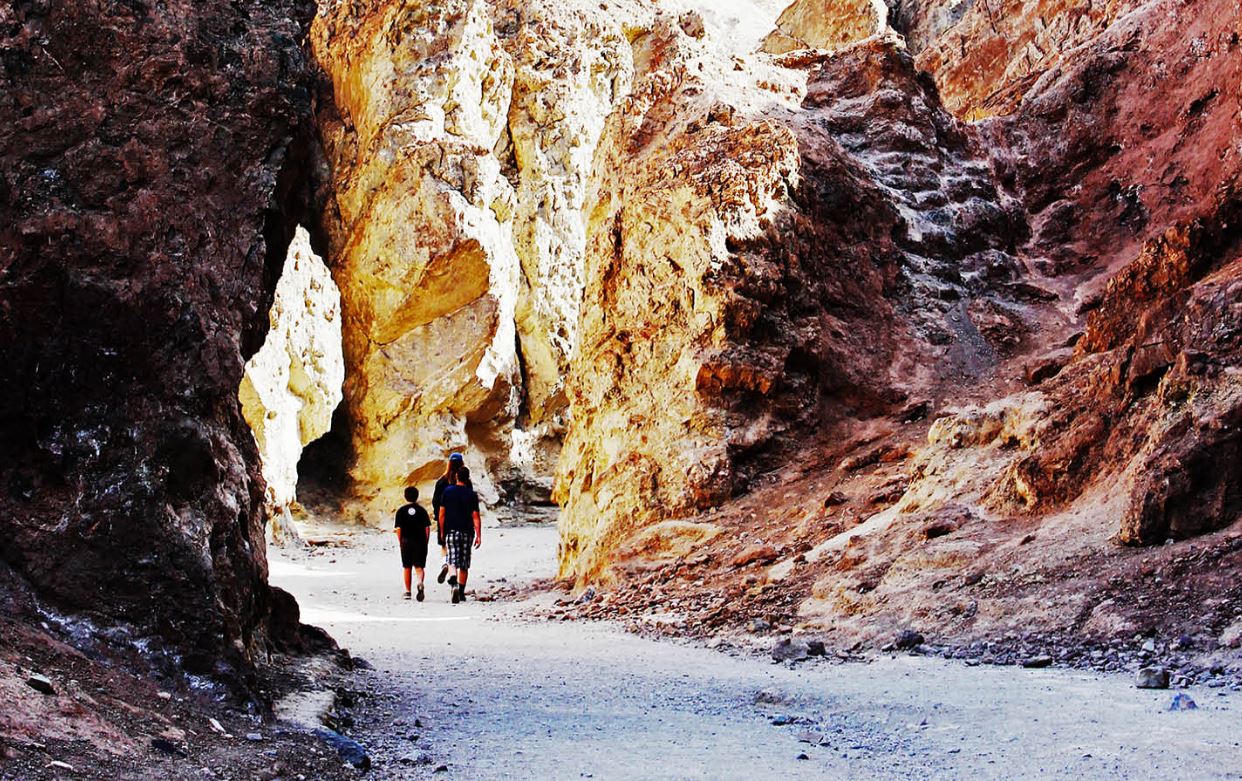 One Last Tip – Be Prepared When You Explore the Desert

Every year, visitors underestimate how hot and dry Death Valley can be, no matter what time of year. Even short, easy walks to Mesquite Flat Dunes and Mosaic Canyon can be fatal if the temperature soars above 100°F/38°C. Not only should you always carry plenty of water in your car and in your hiking pack, but you should also avoid exerting yourself during the hottest part of the day. Also, be sure your vehicle is in good mechanical condition and that your fuel tank is full before you begin each day’s tour. Within the park, gasoline is sold only at Furnace Creek, Panamint Springs Resort, and Stovepipe Wells Village. Before setting out each day, check your tires, check your gas, and check your water supply. And another thing to keep in mind: cell phone coverage is either spotty or nonexistent, so don’t depend on it to rescue you. Be prepared before you go.

Top 10 Most Unusual Hotels in the World ⁠— with video