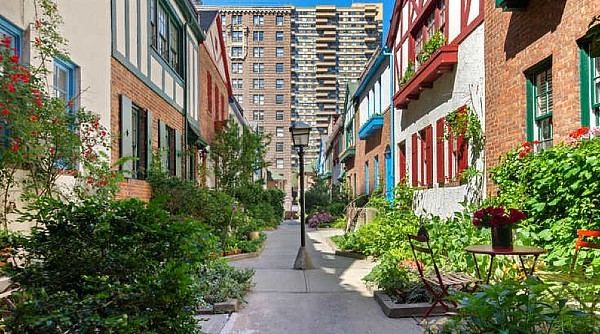 Are you looking for something unique to do in the Big Apple?  How about exploring New York City‘s Hidden Streets?

NYC is one of the largest cultural melting pots on the entire planet. Combined with its sheer size, the variety of activities that happen in the city means that it’s nearly impossible to run out of hidden spots and streets for both locals and tourists to discover. So with that in mind, here are some of the best places that most tourists and many locals don’t know about.

Pomander Walk (as shown in the lead photo)

Hidden on West 95th Street in the Upper West Side, Pomander Walk is a portal to a secret world. It’s basically a row of two-story Tudor homes alternating between brick, stucco, and timber in design. The New York Times reveals that the now semi-private street was built back in the 1920s by Thomas Healy, a club operator who died before he could realize his dream of building a large hotel on the same spot. Today, Pomander Walk continues to be the most unusual block in the Upper West Side – a piece of traditional European architecture smack dab in the middle of modern developments. And thanks to the fact that the buildings are now being used as residences, the entire block continues to be well maintained.

Although it’s not technically a street, the Brooklyn Banks deserve a mention for its storied place in the world of skateboarding and the history of New York City. In fact, Slam Skateboardingexplains that if the sport had its own “Seven Wonders of the World,” this particular spot deserves to be at the top of that list. What’s truly awesome about this location is that the city’s very architecture allowed it to grow into the world-famous skate spot that it is today. Unbeknownst to the city planners who first laid out the iconic red bricks under Brooklyn Bridge, the ramp-like designs would later prove to be ideal for skateboarders. The banks became a creative melting pot for skaters everywhere, a singular place where skaters could push their style to its technical limits. This was most prevalent back in the 80s and 90s, back when New York was only starting to become a hub for the sport. Following almost a decade of closure, the Brooklyn Banks have now been reopened to the public, providing a safe place for skaters as well as an undiscovered cultural hub for tourists and non-skating locals alike.

While you’ve probably never heard of Wooster Street, you might have seen it in movies, as the street is ideal for filming and photoshoots. Apart from being a low-traffic area in the middle of the city, Wooster Street still features a cobblestone road flanked by flagstone sidewalks – perfectly picturesque if you’re after a gritty NYC look and feel. This street is also home to an experimental theater company called the Wooster Group, which is based at the Performing Garage. Additionally, Wooster Street is also where you’ll find the New York Earth Room, a permanent installation featuring 22 inches of dirt laid out across 3600 square feet of gallery space. While this little-known street might feel like a good place to settle, being located in the SoHo district makes it a relatively unknown but expensive spot for real estate – and that’s on top of broker costs. In their feature on New York City brokers, Yoreevo lays out that the average cost of the service is $60,000. This goes to show how expensive the property market is in the city. So while it’s a good place to visit, especially considering how it’s in the middle of a world-famous shopping district, you might want to weigh your options before deciding to settle here.

These are just some of the hidden spots and streets that you might find while walking through historic New York City. While it continues to be one of the most expensive cities on the planet for real estate, there’s no reason why you can’t simply visit and enjoy its many hidden areas.