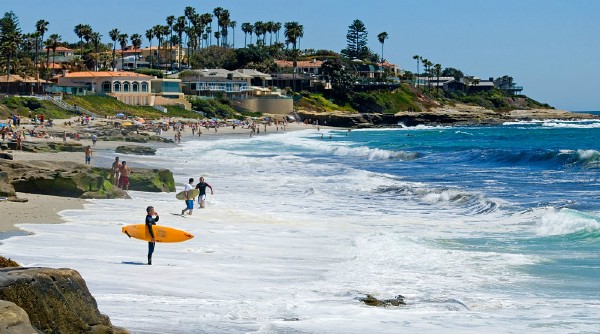 Maybe it’s the sun-streaked hair, the smell of salt air, and the sound of crashing waves. Or, perhaps it’s the laid-back atmosphere. Whatever it is, it’s the unmistakable look and vibe of a California surf town.  so, here are our Favorite 5 California Surfing Hot Spots.

These are the places that live and breathe for that next big break. Come, get a new bikini or board shorts, put your toes in the sand, and watch the action—or maybe catch it from the oceanfront balcony of your room or waterfront seat at lunchtime.

Better yet, go for it yourself and take a surf lesson. 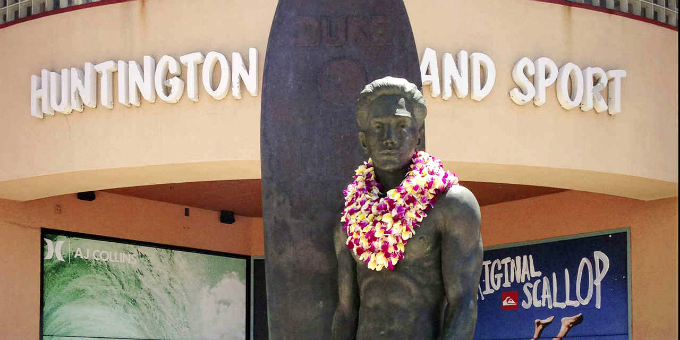 Orange County’s surfing tradition dates back more than 100 years when pioneering Hawaiian surfer George Freeth performed wave-riding demonstrations during the dedication of the new Huntington Beach Pier in 1914. In the 1920s, surfing and Olympic icon Duke Kahanamoku also surfed at the pier. But the sport really took off in the 1950s and the 1960s when Huntington Beach began hosting major events and emerged as the most important surfing city on the American mainland. As local surf legend, Corky Carroll has said, “Orange County is the cultural center of the surf world and Huntington Beach is like the heartbeat.”

Huntington Beach’s stores echo the theme. In front of Jack’s Surfboards, the Surfing Walk of Fame honors top surfers with engraved granite stones in the walkway, while nearby Huntington Surf and Sport immortalize local surf legends with hand- and footprints in a Surfing Hall of Fame. See one of Duke Kahanamoku’s longboards at the International Surfing Museum.

Of course, there’s plenty of surfing in Orange County beyond Huntington Beach. Down at The O.C.’s far southern reaches are San Clemente and San Onofre State Beach (where top surfers ride the legendary breaks at Trestles). Back up the coast, see board-free daredevils bodysurfing at Newport Beach’s experts-only The Wedge. 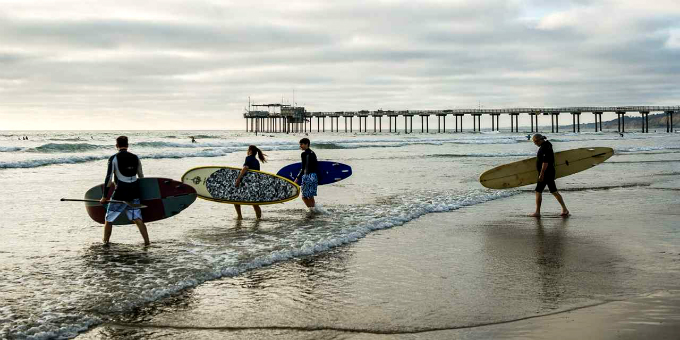 Sometimes it seems as if everyone surfs in San Diego County. When the surf is up, there’s a steady stream of dudes (and plenty of dudettes, too) slipping into wetsuits too. When they’re not in the water or on the beach, they’re driving their cars, boards strapped to the rooftops, heading for such fabled breaks as Bird Rock, Oceanside Pier, and the legendary Windansea (featured in the Tom Wolfe bestseller, The Pump House Gang). The California Surf Museum in Oceanside celebrates the county’s surfing tradition. Step inside to see historic boards and exhibits honoring legends who have carved the waves here.

Throughout the county, especially in beach towns like Leucadia and Encinitas, you’ll find plenty of board shops, including Hansen Surfboards (open since 1961); stop by these venerable hangouts to get tips on local lessons. And even if you never plan to get in the waves, you can still buy a pair of board shorts and power up with breakfast at such classic surf hangouts as Pipes Cafe in Cardiff-by-the-Sea and Beach Break Cafe in Oceanside. 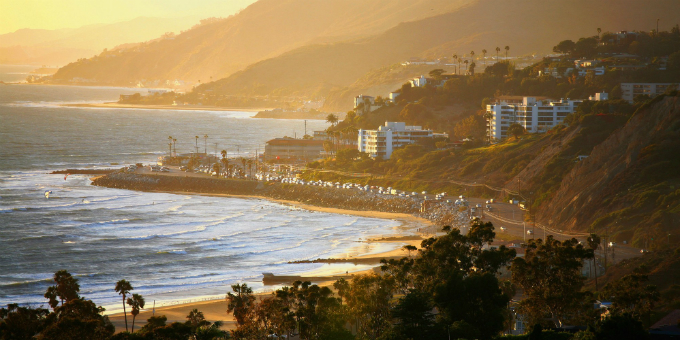 Stretching for more than 30 miles along the Pacific and Highway One, Malibu has achieved almost mythological status among California beach towns. Hollywood stars and top athletes live in oceanfront homes here, under an elegant veil of privacy on long strands of beach, and enjoy front-row seats for surfing and unforgettable sunsets.

While it may sound exclusive, there is plenty of Malibu magic for visitors to access too. Considered to have some of the most perfect waves anywhere, Malibu’s Surfrider Beach, just off the Malibu Pier, was named the first World Surfing Reserve; nearby Zuma Beach is a sun magnet for locals and families. In winter, Point Dume, at Malibu’s north end, provides an ideal perch for spotting migrating gray whales.

The perfect aesthetics stretch beyond the beach, too. The Getty Villa—the original home of the Getty Museum, which opened in 1974—focuses on Ancient Greek and Roman Art (admission is free, but you need to make a reservation). For more contemporary, beachy masterpieces, check out the 30 historic surfboards on display, some dating back to the 1910s, at the Surf Museum at Pepperdine University’s Payson Library. And for wearable art—and perhaps to spot one of the local celebs—browse the shops at the Malibu Country Mart and Malibu Lumber Yard, two upscale retail centers located next to one another.

Afterward, grab a bite at Malibu Farms, the organic café and restaurant that sits right on the pier. Or browse the fresh catches—and try one of the famed ahi burgers—at Malibu Seafood, right across from Dan Blocker Beach. To spend the night like an insider, get a room at the 47-room Malibu Beach Inn, a former motel located on the so-nicknamed Billionaire’s Beach, which was given its original makeover by Hollywood mogul David Geffen.

Tough as it is to drag yourself away from the ocean, head inland a short distance, and you can also hike through hills and canyons, filled with spring wildflowers and even waterfalls, on trails in Santa Monica Mountains National Recreation Area. For a cool guided experience, take one of the two-hour Malibu Wine Hikes on the rolling terrain of Saddlerock Ranch vineyard; walks include stops to see Chumash cave drawings, a meet-and-greet with a movie-star giraffe (he was in Hangover 3), and, of course, a wine tasting. 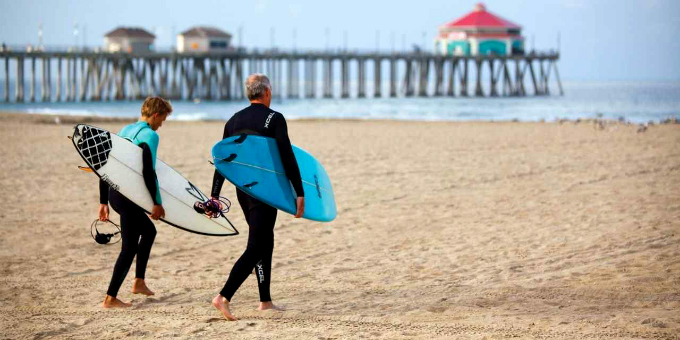 The endless summer lives in Huntington Beach. Southern California’s beach culture thrives along this city’s curving shoreline, where you can bicycle down an oceanfront path, play volleyball, and, of course, surf.

Go to the International Surfing Museum, and you’ll see up close how this Orange County town, with 10 miles of beaches and consistent swells, got its nickname of Surf City, USA (don’t miss the World’s Largest Surfboard on display). Surfing forefathers George Freeth and Duke Kahanamoku both surfed here in the early part of the 20th century, and the U.S Surfing Championship—now summer’s Vans U.S. Open of Surfing—was first held here in the late 1950s.

If you’d rather run than hit the waves, you can still get in the surfing spirit by racing the Surf City USA Marathon (which also includes a half marathon or 5K), held on the first Sunday of February every year. Finishers receive a surfboard-shaped medal after running the flat beachfront course throughout Huntington Beach.

Year-round, surfing definitely sets the tone, and even if you never grab a board, there’s shopping at leading surf retailers and great viewing of some of the local dudes riding the waves alongside the landmark Huntington Beach Pier.

From the pier, it’s just a short walk to Main Street’s surf shops and restaurants, many with sidewalk tables or decks that let you bask in fresh ocean breezes and sun-soaked afternoons. Huntington’s newest outdoor mall, Pacific City, is where you’ll find one-of-a-kind artisanal eats and stylish boutiques—all with an ocean view.

You can get a taste of the Surf City life with stays at Huntington Beach’s luxurious beach resorts—like the Hyatt Regency Huntington Beach (known for its kid-magnet pool playground), Waterfront Beach Resort, and Paséa Hotel & Spa opened in 2016. Check out Paséa’s Treehouse Bar for a rooftop cocktail at sunset. Or discover the more natural sides of town by trying horseback riding in the 354-acre Huntington Central Park, or by hiking and bird watching in Bolsa Chica Ecological Reserve, restored wetlands, and one of Southern California’s most vital coastal habitats. 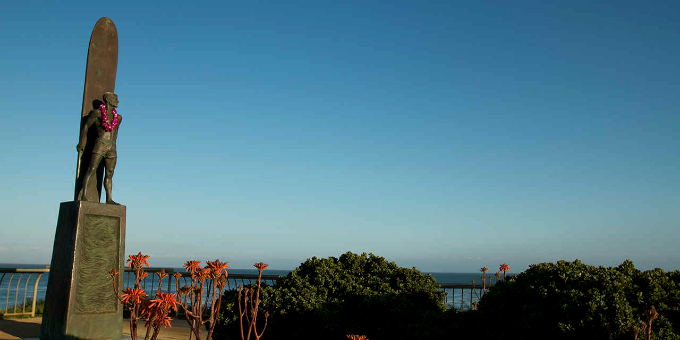 Few can resist the funky, sunny, life-lovin’ vibe of the surf culture in Santa Cruz. Legend has it three Hawaiian princes brought surfing here in 1885, with legendary Hawaiian surfers such as Duke Kahanamoku following in their footsteps. Locals soon took to the consistent, easy waves at Cowell’s, and right-handed point breaks at Steamer Lane and Pleasure Point, and they’ve been carving it up ever since.

Thanks to local legend Jack O’Neills 1950s invention of the wetsuit to battle the Pacific’s notoriously chilly waters, newbies and experienced surfers alike can spend more time out there waiting for the perfect wave. If you want to give the sport a try, friendliest breaks are found at Cowell’s, next to the Santa Cruz Wharf; breakers fronting Capitola are usually novice-friendly too. Club Ed Surf School offers lessons for all abilities; equipment includes wide, easier-to-balance longboards and wetsuits.

To learn more about the local surf scene and its legends, visit the Santa Cruz Surfing Museum, quaintly housed in a former lighthouse along West Cliff Drive. Look over the seawall to see top surfers riding the break at Steamer Lane. And to chill out like a legend, visit the beachside Jack O’Neill Lounge at the Santa Cruz Dream Inn. Surrounded by surfing memorabilia and a great view of Monterey Bay, sip a signature cocktail or ask for Jack’s favorite after-surf libation, a Ketel One Martini. In October, the O’Neill Coldwater Classic attracts many of the world’s best surfers.