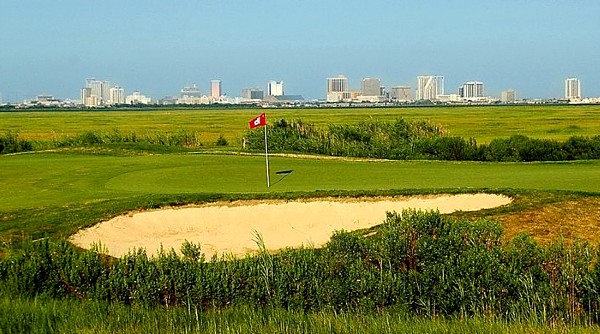 For dedicated golfers, vacation time almost always includes choosing a location that can feed the need for a few good rounds of golf on a new and scenic course or two. But have you ever considered a golf destination of Atlantic City?

Everyone knows there are plenty of destinations known for their golf-related tourism, including the Scottish Highlands, Bermuda, Bahamas, and Mexico’s Cabo San Lucas and Riviera Maya. In the US, Myrtle Beach and Hilton Head, South Carolina are among the most obvious locations, along with Lake Tahoe, Sedona, Las Vegas, and the Hawaiian Islands.  And to that list we’re going to add the under-rated Atlantic City.

We’ve always thought of Atlantic City as being a ‘Las Vegas meets Myrtle Beach’ kind of destination.  Well…ok, perhaps it’s more like ‘Reno meets Virginia Beach’.  But the point is, the region is just as well known for its casinos as it is for the beach and boardwalk. What it isn’t known for quite as prominently is its many golf courses. 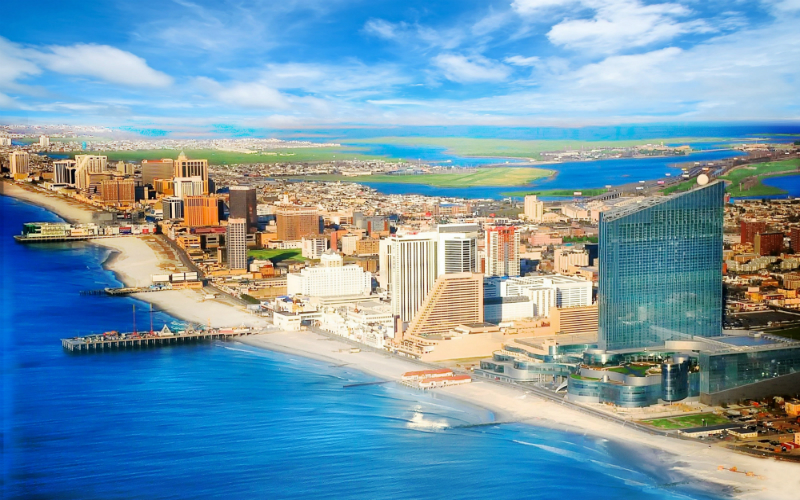 Atlantic City has seen its share of ups and downs, experiencing a boom in the early 1900s as a beach town that further peaked around 1920 thanks to an influx of nightclubs in the area. The city suffered an economic decline after World War ll but was revived in the late ’70s when gambling was legalized.  It brought renewed interest to the area with the construction of several casino resorts.  Yet, despite regenerated tourism, there remained ongoing openings and closures that proved Atlantic City was still struggling to a degree, and by the time Hurricane Sandy hit and destroyed the Jersey Shore in the fall of 2013, visitors to Atlantic City dwindled once again. But like a fighter that refuses to stay down for the count, the boardwalk city continues to push forward.  It has cleaned up the mess that Sandy left behind, some casino hotels have been revised and rebranded, and the area is making a comeback.

With that in mind, and given so many great resorts, restaurants, casinos, and much in the way of entertainment in the city, it’s a great place to consider for a golf getaway. Promoters of the sport often point out that courses in the area can be played year-round unless the Jersey Shore is confronted by an exceptionally harsh winter.  So even though November to March might be dubious, the remainder of the year presents perfect conditions.

With 17 courses in the region, there are plenty to choose from.  Here are 3 that are among the best and are worthy of a round or two. 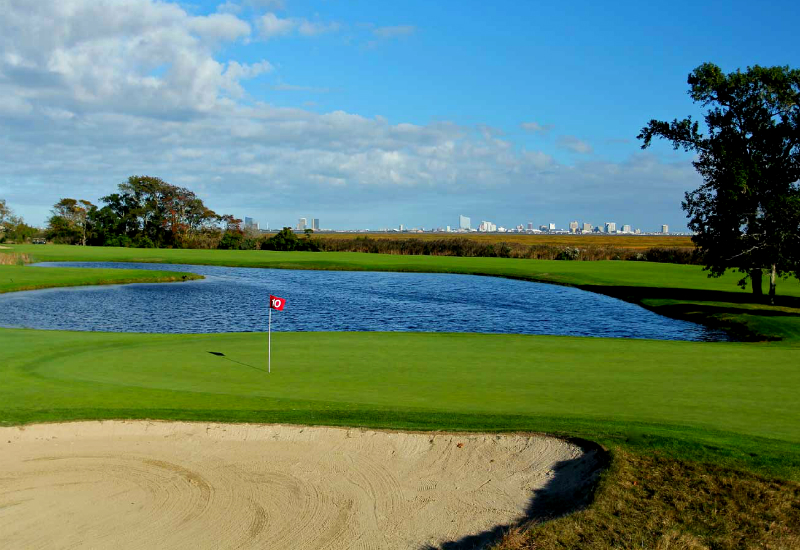 As shown in the lead photo above, as well as to the side, Seaview Bay Course is considered to be the gold standard and was designed by Donald Ross and built in 1914. Veteran golfer Sam Snead captured his first PGA Major at this course approximately 30 years later, in 1942.

Golfers will find 2 historic courses to choose from, links design of the Bay Course and the challenging forest-lined Pines Course.  Altogether, Seaview is the ideal test for golfers of all skill levels.

Measuring 6,247-yards from the back tees, the Bay’s course is short but challenging, and the layout is links-style featuring 94 bunkers.  Here, golfers will find a seaside design featuring rolling fairways among mainly elevated greens and thick fescue grass. 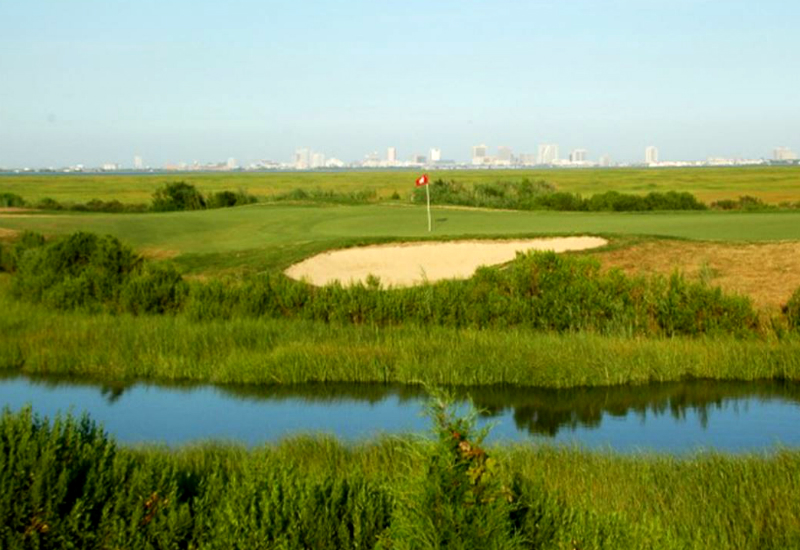 Located just six miles from the center of Atlantic City, this 1897 country club is famous as the place ere the terms ‘birdie’ and ‘eagle’ got their start.  Atlantic City Country Club has been played by such greats as Arnold Palmer and Sam Snead, as well as comedian Bob Hope, and football quarterback Joe Namath.

This par-70, 6,577-yard design has earned the reputation as #1 in the state of New Jersey as its layout snakes its way along the shores of marshlands and Atlantic Ocean bays. The course’s rolling greens are lush with native grasses flanking fairways and bunkers. The front nine is a par 4 that measures over 445 yards, the back nine is shorter and plays easier to balance the level of difficulty. Atlantic City Country Club has played host to 6 USGA championships. 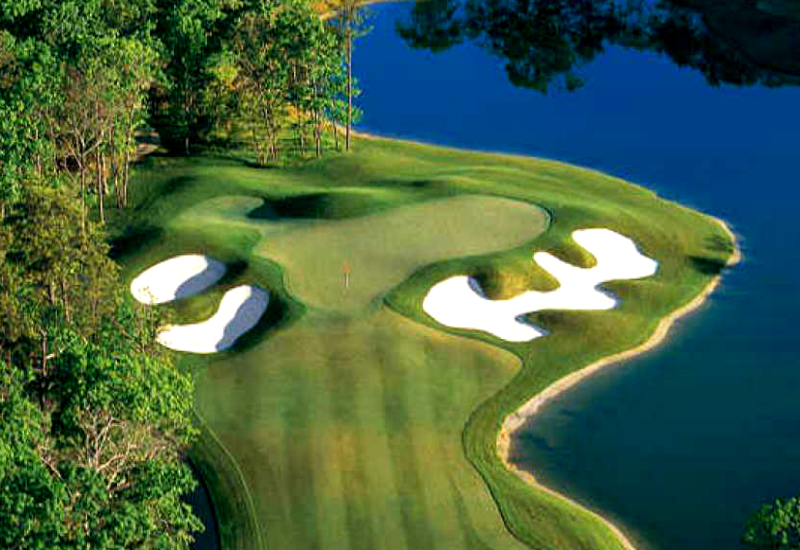 Located in Cape May County between Atlantic City and Cape May, golfers will find Shore Gate Golf Club, a championship, par 72 course that carries a daily fee.  This top-tier course, which opened in 2002 and has been ranked numerous times as among the best in the state, is located in a forested area with multiple elevation changes and a gorgeous landscape.  It is here that golfers will find a series of water hazards thanks to 7 on-site lakes, among a unique combination of parkland and links-style golf.

It’s a challenging course that requires critical thinking as players navigate a design that includes unfavorable bunkers, thick fescue grass, and large barren areas.  It is the only golf course at the Jersey Shore to have been named by Golf Digest and Golf Magazine as the best new public golf course nationally.