The Ocean City area touts seventeen impressive championship golf courses, and the best time to visit is during the fall. Though you might be inclined to consider Myrtle Beach first, there are plenty of reasons to opt for this area of Maryland when it comes to a golf getaway. For starters, golf season in this community reaches a high point during the months of September and October, with temperatures still quite capable of reaching 80 degrees Fahrenheit (high 20’s Celsius). The calendar might indicate that autumn has arrived but the courses continue to look and play like summer. Not to mention that if you live north of the border, in Toronto or Montreal for example, this is an option that poses half the drive time.

Considering the impressive Canadian attendance over the years, the golf community of Ocean City gives back with a 25% discount for Canucks looking to play during the fall. And golf packages that include hotel for 4 and 5 nights can be found for less than $300 US.

Since Ocean City is a tourist destination all on its own given its ever-popular stretch of beach, golfers can expect to find a variety of accommodation options and restaurants, as well as bars and nightlife. And the great thing is, the beach crowd and vacationers have more or less cleared out by fall so booking does not pose a problem.

If per chance the weather turns bad for a day or you simply need a break from the links, there’s plenty to do within a relatively short drive, including the cities of Philadelphia and Washington, which are tourist destinations in their own right, offering several attractions and things to see and do.

Getting back to the courses, it’s worth noting that several in the area are ranked among the Top 100 according to Golf Magazine and Golf Digest, right along with courses like the infamous Pebble Beach. The treasure trove includes such clubs as Rum Point, Bayside, the Links at Lighthouse Sound, Eagle’s Landing, Baywood Greens, and Glen Riddle.

Baywood has often been described as the ‘Augusta of the North’, whereas Bayside is a Jack Nicklaus Signature course offering a variety of backdrops that altogether produce the feeling of playing more than just one course. Links at Lighthouse Sound is an oceanside course that offers fantastic views of the city skyline over the water. Rum Point is also bordered by the Atlantic Ocean yet features a completely different ambiance and feel. Eagle’s Landing boasts a variety of holes that play over wetlands and Bermuda fairways. And Glen Riddle’s Man ‘o War course features lush greens and grassy bunkers akin to what you might find on a course in the British Isles.

Whatever your preference, Ocean City has it and gives Myrtle Beach a run for its money. For information on golf or to book your next stay in Ocean City, check out OceanCityGolf.com 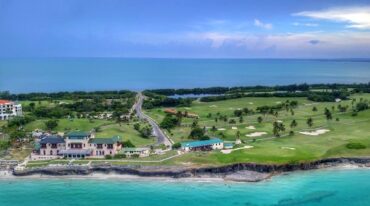