When considering golf in the UK, most golfers across the pond are generally lured to the lush green fairways of Scotland and Ireland. However glorious golf abounds in England which boasts an abundance of golfing clusters comprising of well-known must-plays and relatively undiscovered hidden gems.

Of course, many will have heard of Royal St George’s, host of the 149th Open Championship, but may not be aware that Kent is also home to some of the finest courses in England.

Though probably best known for its east coast trail of some of the UK’s premier championship links that include Royal St George’s, the county also offers an array of parkland and downland masterpieces designed by some of the most revered golf course architects whilst also harbouring some delightful hidden gems.

Royal St George’s, about to host The Open Championship for an impressive 15th time, is a wild and windy championship links that should be on every golfer’s bucket list.

Founded in 1887, is one of England’s masterpieces that is deceptively challenging thanks to its severely undulating fairways, tricky greens and a splattering of blind tee shots and pot bunkers. Its thatched roof shelters, the red cross of St George on its pin flags and the existence of the UK’s tallest and deepest bunker that faces you at the 4th tee make St George’s both unique and mesmerizing.

Nearby Royal Cinque Ports, another fine championship links has also been awarded The Open Championship on two occasions, in 1909 and 1920. A testament to the quality of this quirky, demanding course, the Club has been the scene of many tournaments, both professional and amateur and since 1924 has been home every year to the Halford Hewitt Public Schools Championship, the largest amateur tournament in the world. Next year, Deal, as it is informally known, will host the Seniors Amateur Championship.

The final club in this links trio is Prince’s, home to 27 holes with each loop boasting its own unique characteristics. An impressive array of revetted bunkers, rolling greens and seaside breezes make for challenging golf. A plaque marks the spot at the now-famous Sarazen Bunker where the golfing legend first used the sand wedge he had invented to win The Open Championship when it was staged here in 1932. Prince’s also offers well-appointed apartment accommodation at The Lodge at Prince’s offering stunning views over Sandwich Bay, which makes a great base when visiting this part of Kent.

Further down the coast, there’s also the understated Littlestone. Founded in 1888, this is another wonderful, traditional championship links course laid out on naturally undulating land and its own range of sand dunes. Its unique microclimate makes it one of the driest places in England, giving it some of the truest greens in the country.

For panoramic views, head off to North Foreland. Established in 1903, its elevated location above Kent’s iconic white cliffs ensures stunning vistas of the English Channel from every hole whilst broad fairways disguise a tricky layout where strategically-placed bunkers lie in wait. Alternatively head for Walmer & Kingsdown, The Club on the Cliffs, which also enjoys a dramatic position perched on top of the iconic White Cliffs of Dover overlooking France which can easily be seen on a clear day. Designed by the architect James Braid, a round here is a memorable experience with its panoramic vistas along the Kent coast towards Deal and its inland views across the picturesque rolling hills of Kent.

On the outskirts of Kent’s medieval cathedral city, Canterbury Golf Club was founded in 1927 and still, today is considered to be one of Harry Colt’s finest designs in England. Though first laid out as a downland course, the gradual introduction of oaks and silver birches along the fairways have altered the nature of the layout that now has more of a parkland feel, though a little gorse and broom can be found on some holes.

Further inland still, the two downland layouts at London Golf Club just 25 miles from the centre of London, were created in the early 2000s by the legendary Jack Nicklaus. Both possess numerous water hazards whilst the quick undulating fairways force a links-style approach and require skilful course management. The club also boasts a well-appointed clubhouse that prides itself on personal service along the lines of a private country club.

Meanwhile, in west Kent, Hever Castle Golf Club offers 27 holes in picturesque parkland set in the famous Hever Castle Estate. The championship course boasts an array of stunning holes across its 7,002 yard, par 72 layout, with the 644-yard, par 5 17th regarded as its standout hole whilst a stunning stretch of holes from the 11th to the 13th – Hever’s very own “Amen Corner” – has carries over water and onto tricky, slick greens that require careful negotiation.

Not far away in Lenham, an exquisite nine holes at Leeds Castle Golf Club offers golfers the unique experience of playing golf against the backdrop of one of England’s castles, which this year celebrates its 900th anniversary. Set in the parkland estate of ‘the loveliest castle in the world’, the course’s tricky fairway undulations and a worrisome water hazard in the form of the castle moat make Leeds Castle a solid test of golf for players of varying standards.

Natural clusters of courses can be found around Kent’s main towns, all set against a backdrop of rich and varied culture, buildings of historic interest, bustling seaside towns and magnificent, inspiring gardens.

Added to this, a broad spectrum of accommodation, gastronomic restaurants, a dry and temperate climate, close proximity to London and easy access from overseas have all helped to establish Kent as one of England’s premier golfing destinations.

18 Holes at Royal St George’s, Royal Cinque Ports & Prince’s & 2 nights B&B at The Lodge at Prince’s  (twin occupancy) plus three-course dinner at The Lodge from £575 pp.

If you’re looking for something a little further afield, why not set off to the south west of England, a popular holiday spot for British and overseas visitors alike. For the golfer, it offers an excellent choice of beguiling links layouts, most notably St Enodoc which regularly features high up in national golf course rankings.

It was Tom Doak’s Confidential Guide that heaped praises on St Enodoc that originally stirred interest from Americans and since then it has become somewhat of a golfing pilgrimage to golfers in the know.

Another James Braid classic that was founded back in 1890, the course is one of England’s most mesmerizing and tantalizing links. Thanks to its coastal position high up on the dunes, St Enodoc boasts spectacular views over the North Atlantic Ocean and the Camel Estuary from every single hole.

True to links form, the design is quirky too with the first tee shot a totally blind one with several others to follow whilst at the 6th hole, players come up against the imposing Himalaya Bunker – reputedly the tallest bunker in Europe – that fiercely protects the green and is only taken on by the bravest of the brave.

After meandering through sand dunes on the front nine, the signature 10th hole winds its way towards 11th Century St Enodoc Church where the Poet Laureate, Sir John Betjeman, lies buried beside his favourite course. A challenging hole, it requires a decent drive followed by an even better second aimed at the church porch to avoid the lateral hazard which runs the length of the hole as it creeps ever closer to the left-hand side of the green.

Not surprisingly, ‘Once trodden, never forgotten’ is a refrain often heard from golfers walking off the 18th green.

In addition to great golf, North Cornwall is a holiday destination offering a wide range of sightseeing opportunities as well as charming seaside towns.  Examples of these include the celebrated Eden Project and the Lost Gardens of Heligan, Tate St Ives, featuring local as well as international artists, and the lively fishing port of Padstow, where the TV chef Rick Stein established his first seafood restaurant. 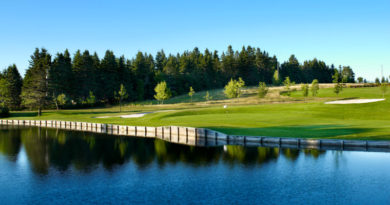 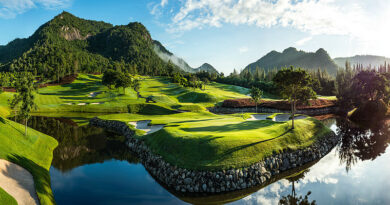 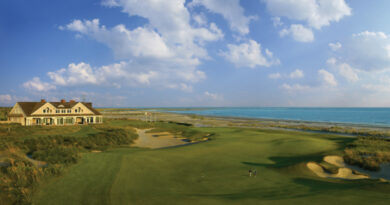 One thought on “Golfing in England”