There are presently 397 golf courses located in New Zealand, and it’s easy to understand why given that it is a country of breathtaking landscapes, lush forests, glacial mountains, amazing wildlife and a truly pleasant climate, which makes NZ a haven for outdoor activities.  That’s likely why it is estimated that 500,000 adults play golf here each year, which makes it the highest participation sport in the country.

Like any great golf destination, there are some courses considered standouts.  These are the prestigious country clubs considered a ‘must-play’, not only for the challenge they present but also for the sheer beauty of their phenomenal grounds.  The following two courses understandably fall into this category.  So if you are a golfer and plan on visiting NZ, be sure to seek them out and play a round. 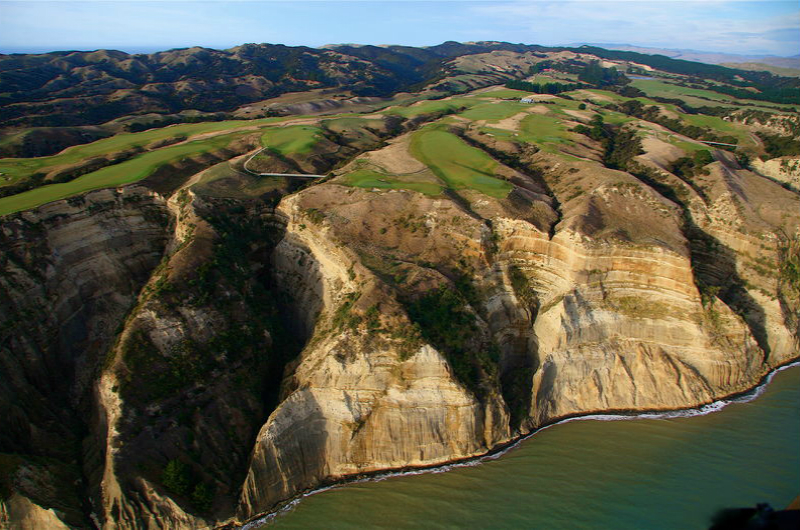 Cape Kidnappers golf course on the east coast of New Zealand’s North Island has been rated among the best in the world and ahead of some of golf’s most famous old world destinations. The course is built on a narrow peninsula that juts out from the rugged Pacific Coast of the renowned Hawke’s Bay wine region.

The super luxury lodge attached to the golf course, which opened in 2007, is one of New Zealand’s most exclusive and highly acclaimed resort destinations.

Since opening in 2004, Cape Kidnappers golf course has been ranked as the 4th best golf course in the world by Golf Magazine. It was rated as the world’s best course by the UK’s Daily Telegraph.  Andrew Harpers lists the Tom Doak designed masterpiece as one of the 15 best waterfront courses in the world.

The golf course has fairways that play out along a series of jagged ridges jutting out like fingers into the sea, before plunging to rocks below. Misdirected balls can take a full 10 seconds to reach the water.

Designed by the famed American architect Tom Doak, Cape Kidnappers is a spectacular course. While it is devoid of the usual sandy dunes that characterize true links courses, the harsh landscape is in keeping with the game as players must contend with fearsome ravines, contoured fairways, and fast tilted greens. 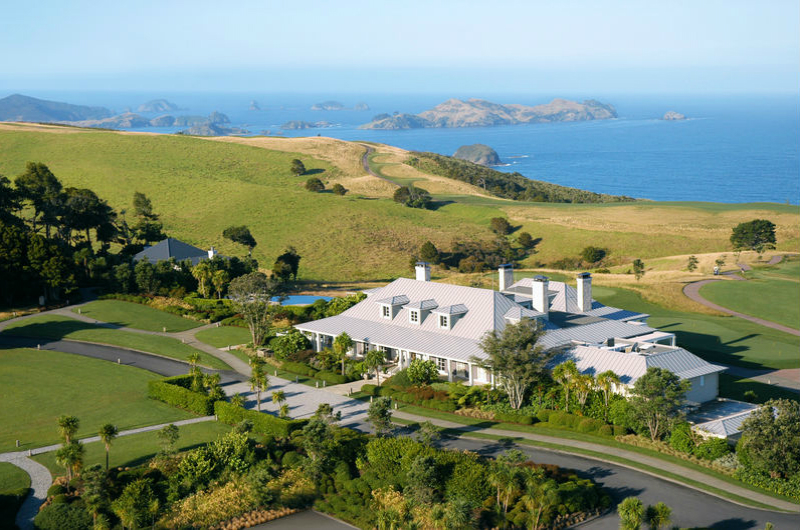 The Lodge at Kauri Cliffs – perched above Matauri Bay (as seen in the lead photo), in New Zealand’s beautiful Bay of Islands – is the centrepiece to a golfing dream realized by New York financier, philanthropist, golfer, and Kiwi-phile – Julian R Robertson.

For Robertson, it all began in the 1970s during a happy family holiday in New Zealand’s northern region, when he spotted the 6000-acre / 2500-hectare property. While others were awestruck by the breathtaking cliff top sea views, secluded beach coves, rugged coast and semi-tropical climate, he visualized golf course fairways and greens.

The result was an award-winning course that’s become the sort-after destination of golf-lovers from around the world, along with the many Kiwis who also line up to tee off on a unique golfing idyll.

One golfing guest has written in the guest book: “Pebble Beach is boring.” Another writes that “I’d much rather play this than Pebble because it’s more scenic and more challenging.”

It’s difficult to compare the two when Pebble Beach has been established for many years, but apparently, Kauri Cliffs has at least one advantage – far fewer players on the course.

Designed by David Harman and carved into the landscape, Kauri Cliffs features stunning ocean views, including several holes that are particularly testing on the nerves of the acrophobic golfer.

As well as a golfer, Robertson is a religious man – as he puts it: “We didn’t really do anything – it’s God who has given us this beautiful land; we just enhanced it.”

And, very carefully, for the golf course at Kauri Cliffs fits perfectly into the natural lay of the landforms without evidence of any obvious earth movement. That natural element also pervades through the laid-back Kiwi style that the country is renowned for.