If you’re a fan of historic hotels, especially those with a castle-like flair, then be sure to check out the Fairmont Château Laurier in Ottawa.  Built in 1912 with the look of a 16th-century French château, this property was at one time simply called Château Laurier.

In 1988 it became part of Canadian Pacific Hotels and received a name change in 1999 when it became part of the Canadian chain of Fairmont Hotels, which specializes in historic properties and has usurped similar hotels such as The Royal York in Toronto, The Banff Springs Hotel in Banff, Alberta, and the Château Frontenac in Quebec, to name but a few. 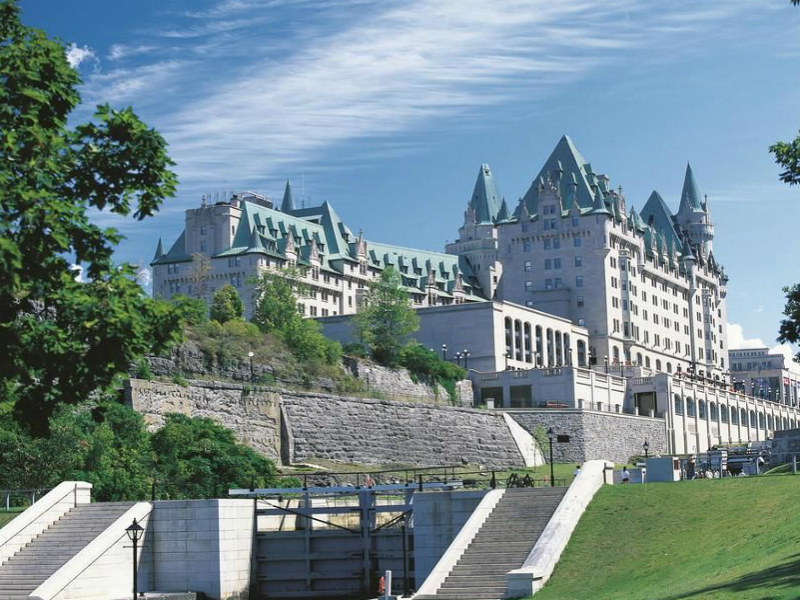 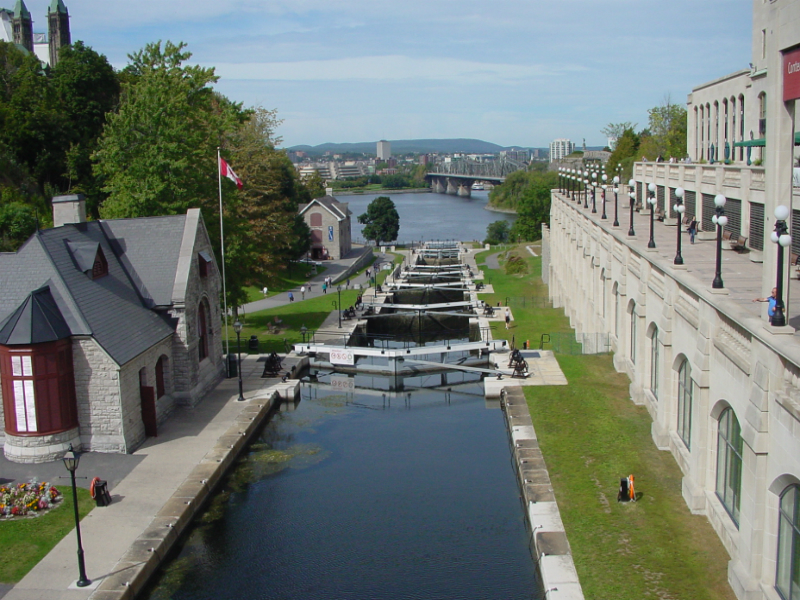 This Ottawa landmark, which was deemed a National Historic Site in 1981, certainly has ‘location’ going for it considering it sits adjacent to the Parliament Buildings and the Rideau Canal near the Ottawa Locks.  The hotel not only boasts scenic views from every room but is perfectly located for Ottawa tours and the many events that take place all year long on the Rideau Canal.  Winter or summer, there’s always something to do.

It is only a five-minute walk to Major’s Hill Park and the Ottawa Convention Centre, and the Rideau Centre Mall is less than 100 meters away. 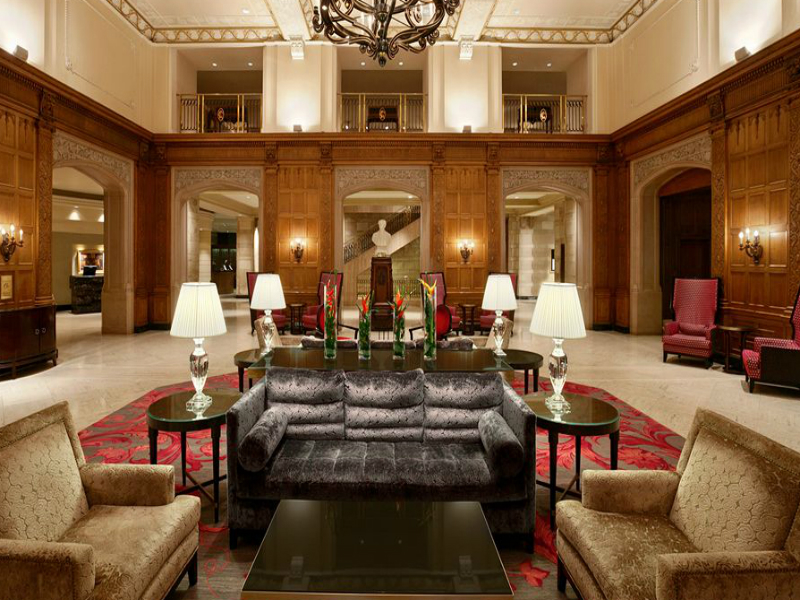 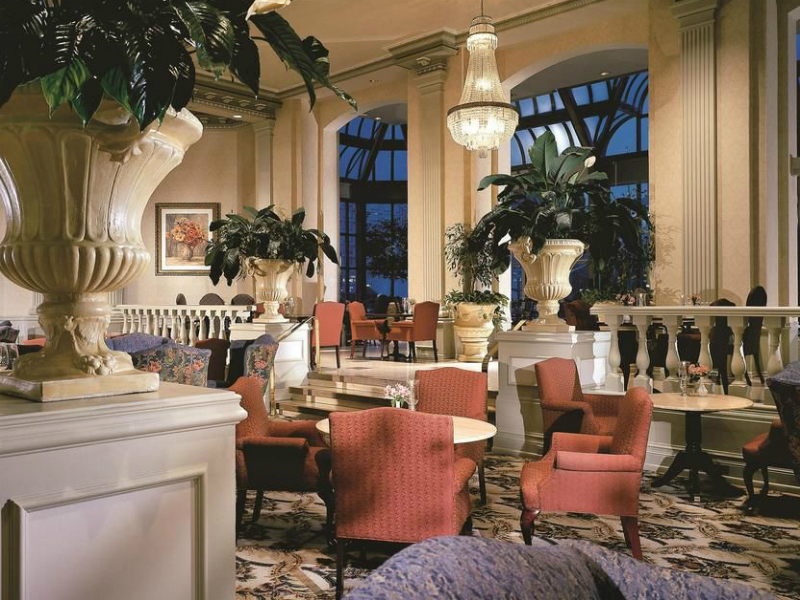 The lobby is warm and welcoming, decorated with overstuffed chairs, chandeliers, and plenty of wood.  The hotel is equipped with a convenient business center for working travelers, a well-equipped fitness facility, a lounge called Zoe’s for coffee or drinks and light food options, as well as an upscale restaurant called Wilfrid’s for fine dining.

It also houses an art deco indoor pool with balcony viewing.  At one time, the pool area walls were decorated with a colorful tile mosaic, almost reminiscent of a Roman bathhouse, but modern-day renovations now give the pool a more refined look with beige marble and turquoise lounges. 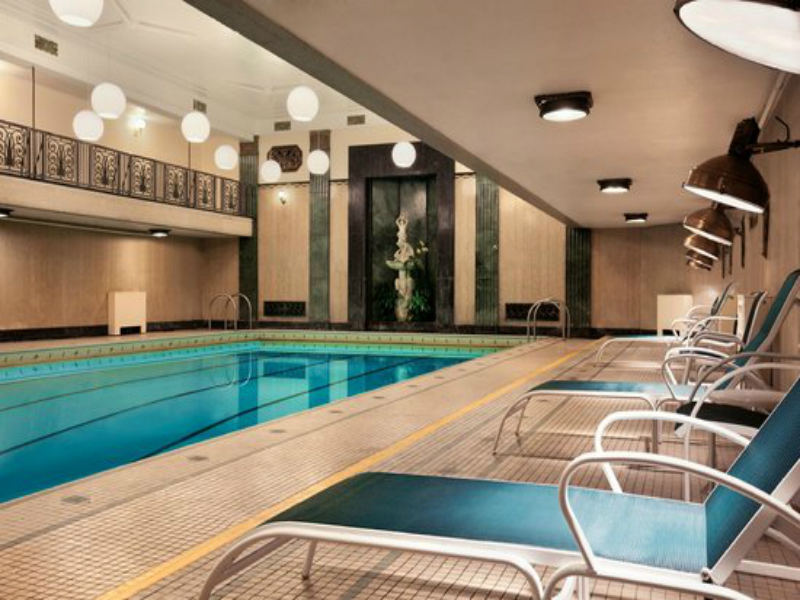 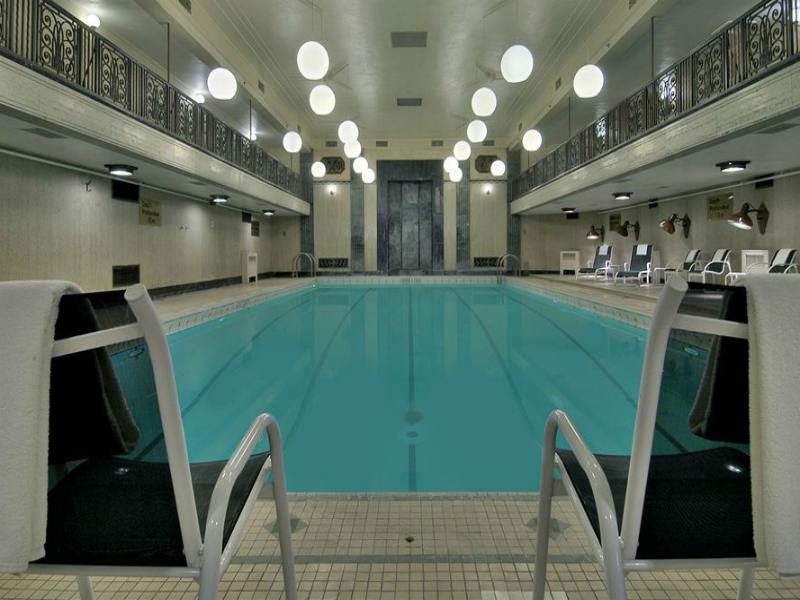 The hotel contains 426 rooms with options of a regular double room, or a suite with an adjacent living area and pull-out sofa, both of which are classically decorated and boast French Provincial furniture in keeping with the hotel’s intended look. Club-level rooms offer access to a private lounge.  Standard in every room is a Keurig coffee maker and a mini-bar (for a fee), a work desk, flat-screen TV, and complimentary bathrobes, which come in handy for cuddling up and lounging. Handily, Wi-Fi is also available in-room. The rooms are clean and comfortable and the views are pleasing.

However, as nice as the accommodations are, there are a few notable drawbacks.  For example, the bathrooms are quite small and offer very little counter space for personal items.  Rooms can feel overly warm and somewhat stuffy – in both winter AND summer months due to heating/air conditioning units that are difficult to regulate.  And the hallways can be noisy. The sheer length and openness of the hallways cause a cavern-like effect where noise is amplified as staff and hotel guests alike talk in the hallways, make their way to and from rooms, and get on and off the elevators.  While a certain amount of noise is to be assumed at any hotel, you might be disturbed by it depending on your sensitivity. And finally, parking is not included in your nightly hotel rate so expect extra fees. 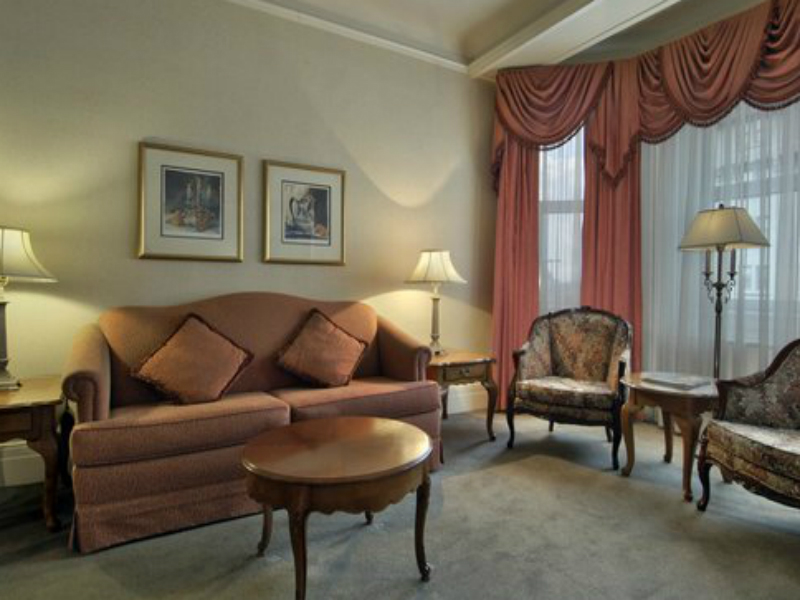 Living Area in a Suite 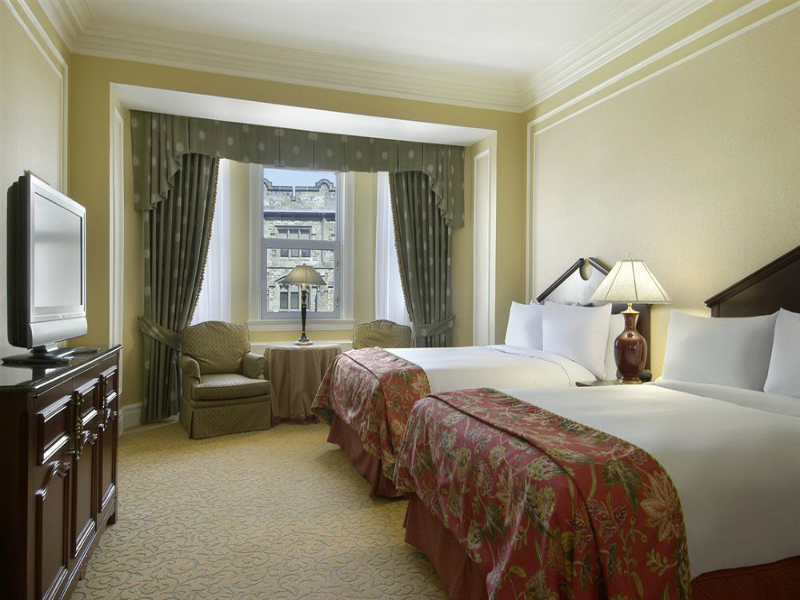 At the end of the day; however, the drawbacks are few considering that a stay in Fairmont Château Laurier is an ‘experience’ and far surpasses a regular hotel if you’re looking to soak up the history of Ottawa.  The location is outstanding, the atmosphere is exceptional, and certainly, the friendly and helpful staff will make your stay a memorable one.

What to Expect at Royal Palm Galapagos

What to Expect at Secrets Impression Moxché –...

Review of Royalton Antigua — with video

What to Expect at Domes Zeen Chania, Crete...

What to Expect at Hilton Playa Del Carmen

What to Expect at Gaylord Palms Resort, Orlando