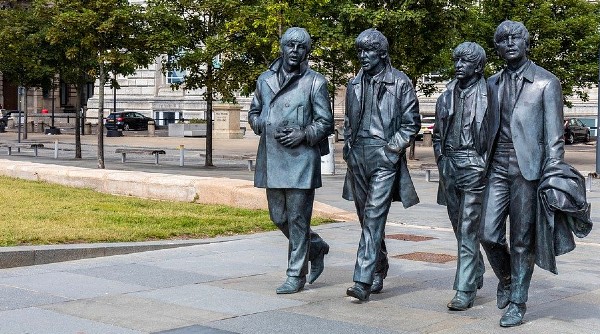 “Liverpool is a strange place indeed.”  This was how tour guide Peter Elson introduced Beatleswalk, a historical and wildly entertaining walking tour that takes visitors on a journey through central Liverpool and the lives and rise of The Beatles within their hometown.

A former journalist of 20 years, Peter had both a vast wealth of knowledge and a brilliant way of communicating information that had me hanging on his every word. We met at Pier Head at the Mersey River dockside, where a stunningly realistic set of statues of the Fab Four stood tall and proud. It was a perfect place to start as Peter introduced the history of Liverpool as a port city built entirely on the shipping industry and how the working-class community affected the upbringing of the band.

As a dedicated and well-read fan of the band, I was interested to see how much new information I could get out of this tour, and was absolutely stunned at what I learned. Despite having read tons about the band’s upbringings in and around the city and hence being familiar with all the sites and street names, the one crucial point I’d overlooked entirely over the years is how essential Liverpool itself was in molding The Beatles into the most influential pop group in history. 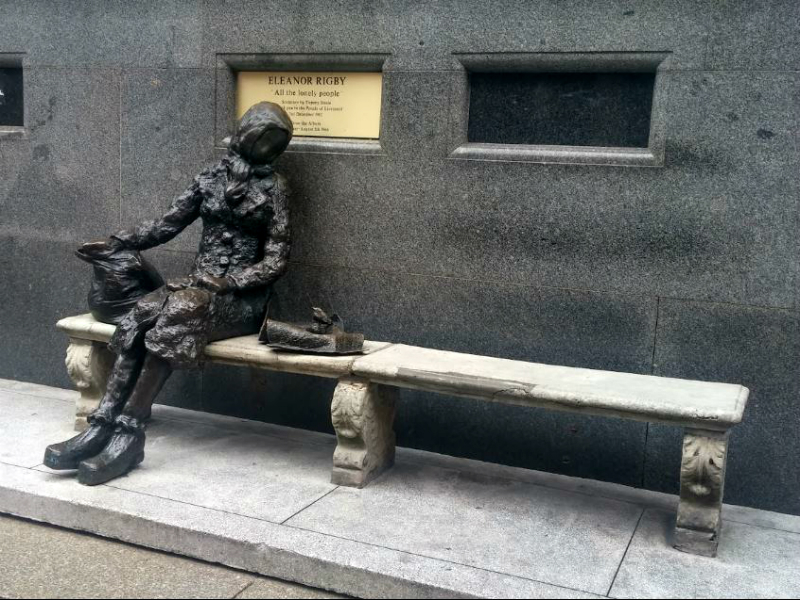 Eleanor Rigby – from the song of the same name 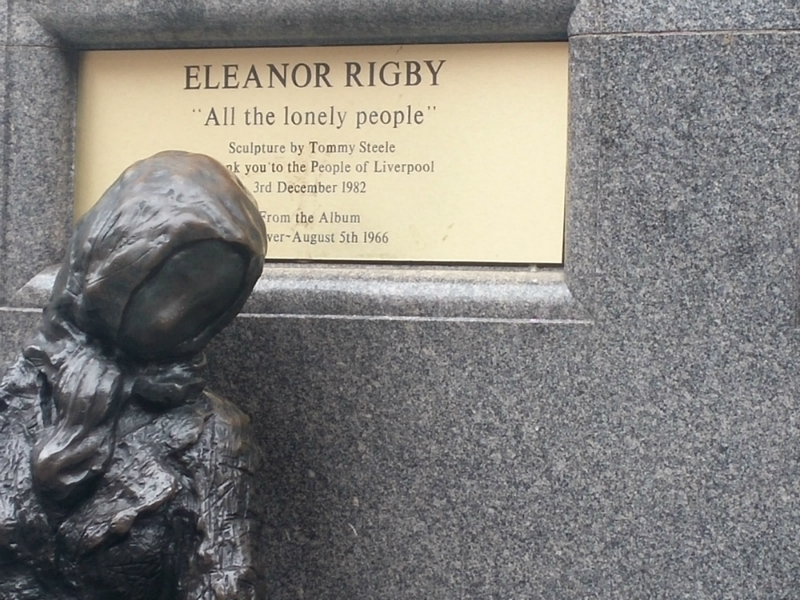 Plaque with partial lyrics… All the Lonely People

That said, within the first 10 minutes of the tour I was loaded up with a fascinating socioeconomic foundation of Liverpool backed by the standing testimony of fine historic buildings that were once operated by the city’s largest shipping companies. Having been the main port that made the city filthy rich in the pre-flight era, Liverpool was also the first community of people to have access to BBC-banned rock n roll records that local sailors would collect on their travels to America.

“Had The Beatles not been teenagers growing up in Liverpool at that time, they never would have had access to the influences of Elvis, Buddy Holly, Chuck Berry, etc., and simply wouldn’t have come to exist.”

The walk also involves a short trip to the Museum of Liverpool, also located on the riverfront, where a short film in a 360 theatre on the beginnings of the band is shown. Here Peter also walks us through a replica of Mendips (John Lennon’s childhood home), the famous grey suits, and the making of each album cover. Throughout all this and the rest of the tour, Peter colors the facts with endearing anecdotes and related side stories that bring your imagination to these moments in history with vivid illustrations.

A short walk into the city center brings us briefly to the site of now-famous footage of The Beatles’ civic reception at town hall and then over to Mathew Street, home of the iconic Cavern Club. Again, we are taken back in time to truly feel and understand the significance of these sites through Peter’s narrative. After a few moments to wander the club where manager Brian Epstein discovered the act that would change history, we are brought to the former site of NEMS on Whitechapel, the department store and record shop owned by Brian’s family. 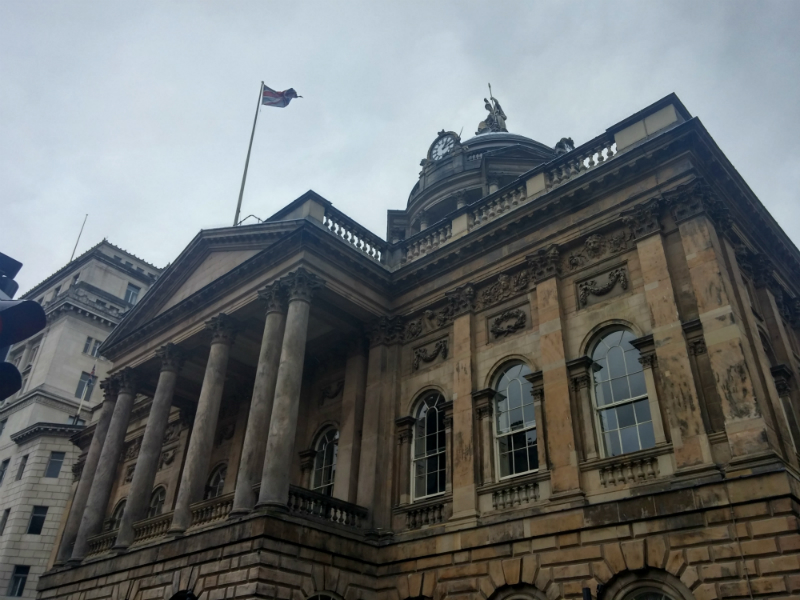 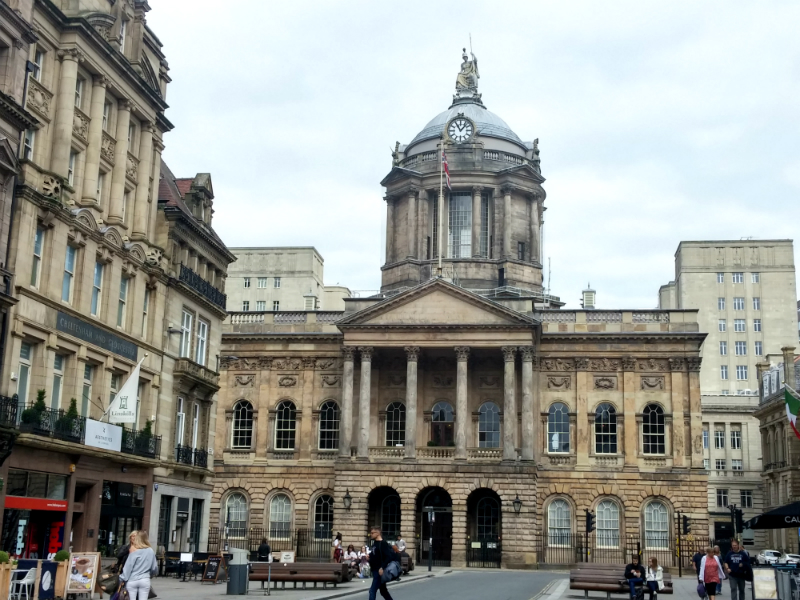 Directly across the street from NEMS is The White Star, significant for its completely intact corner bench where the boys would get paid for their near 300 performances at the Cavern. Finally, the 90-minute tour ends a few steps down Whitechapel at a brilliant art installation of the subject of one of the band’s most inspired hits, Eleanor Rigby.

Luck had it that I was able to extend my time with Peter, who then tailored the rest of the afternoon with a combination of the city’s historical sites and stories while we continued our way across the top end of town and past the birthplace of Brian Epstein, John Lennon’s high school (which is now handsomely supported by Paul McCartney), a light lunch at a former orphanage, and a tour of Liverpool’s two grand Cathedrals sitting on either end of Hope Street (the only street in the world with two cathedrals are situated). A different route that we chose not to take would have included a local bus trip to the site of the boys’ childhood homes. 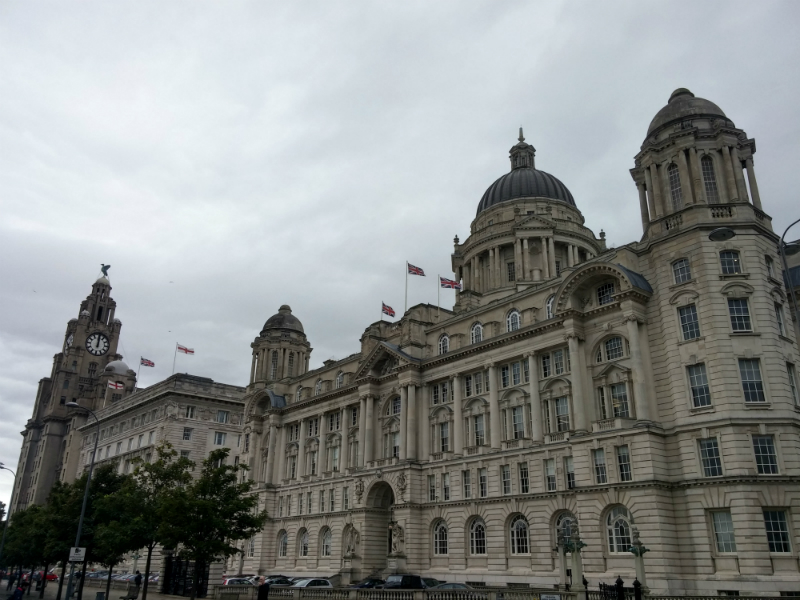 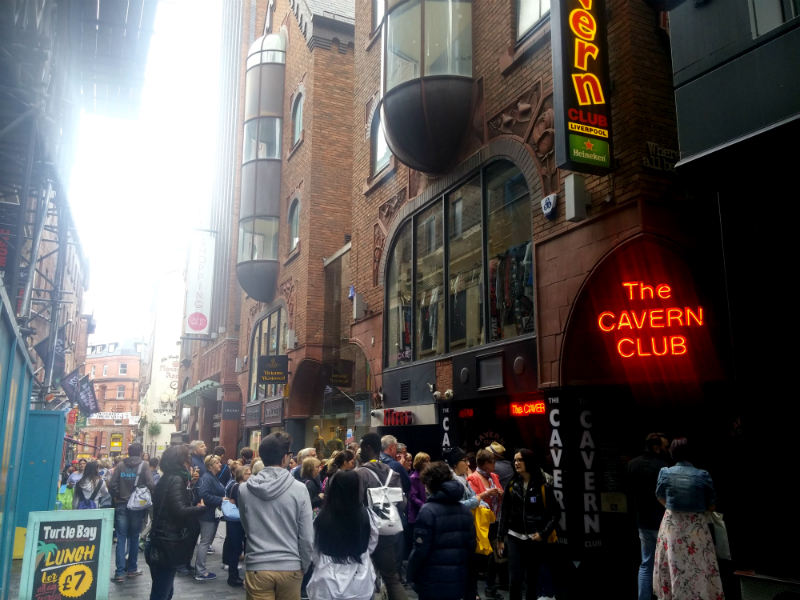 The Cavern Club on Mathew Street

If you’re spending any amount of time in Liverpool, any variation of a Brilliant Liverpool Tour is an absolute treasure to learning about the city’s checkered past and iconic natives that span far beyond The Beatles. However, take heed not to pack your schedule too tightly as it’s highly likely that the advertised 90-minute Beatleswalk will last up to twice as long. For me (to my sincere delight), what started as a 90-minute Beatles-focused tour turned into a privately guided, fully tailored 8-hour adventure spanning from end to end (physically and figuratively) of the beautifully raw, rag-tag town of Liverpool, England.

PROS: the 90-minute walk is an absolute steal at only 18GBP per person or 30 for 2. Though it is highly recommended to inquire about a full-day private tour where you can tailor the trip to your delight.

CONS: lots of outdoor walking, subject to unpredictable bouts of (usually light) rain. Not for those who tire easily.

Review of The Resort at Paws Up – Montana

What to Expect at Anantara Iko Mauritius