Tours are a staple of any successful NYC trip, and The Ride’s are among the City’s most thrillingly original. They’re not the usual double-decker, hop-on/hop-off fare you might envision when you hear the words “bus tour.” To begin with, they take place on a globally patented, $1.5 million travelling theatre with floor-to-ceiling windows and sideways seating, making explicit what New Yorkers and visitors already know: the streets of New York City are the world’s greatest stage. The company’s namesake product is critically acclaimed, Drama Desk Award-nominated experiential entertainment—part tour and part show, hosted by two comedians and featuring street performances, original music and video. The history-themed Downtown Experience alternates between stopping at live landmarks and travelling to the past (via virtual reality headsets). And The Tour takes passengers to New York’s most iconic neighbourhoods and landmarks with a script and multimedia features illustrating the past, present and future of Manhattan north of 23rd Street. The Ride and its family of 21st-century tour productions are designed as a good, fun primer for newcomers—but also have enough depth to surprise seasoned locals, offering a completely innovative perspective on the City. Interested? Here are some of the coolest moments from each, to show why you’ve got to see all three.

A freestyle rapper follows you for a block.

https://climbingguidesinstitute.org/12354-professional-writing-company/ click here https://www.cochise.edu/academic/mary-mccarthy-essays-online/32/ steps research paper all about books writing paper short essay topics cv writing service ex military viagra drug interactions essay on india land of opportunities resume writing service gold coast copd and viagra treatment super cialis order follow link viagra dosage timing go to site 4cheapest cialis indexphp thesis example for cause and effect essay acknowledgement thesis degree follow site waitressing cover letter follow url https://www.nationalautismcenter.org/letter/essay-titles/26/ generic viagra is safe science homework help for 6th graders go here goat farm business plan malaysia source url essays about becoming a better writer enter site essays written by children case study method in hrm http://www.naymz.com/thesis-statement-maker-for-essays/ On: The Ride
What happens: The most exciting part of The Ride is that it turns the streets into a stage. As you move along, suddenly a pizza-delivery-man becomes a break-dancer or a businessman turns into a tap-dancer performing to music pumping through the bus. The most memorable performance comes from the hyped-up freestyle rapper who not only raps with skill but high-fives strangers on the street, roasts them, then turns to the bus and urges everybody to get a good wave going from side-to-side. It’s like they bottled the spontaneity that makes New York City special.

On: The Ride
What happens: As you pass One Times Square, you meet an over-eager hippie excited to be the first one to celebrate New Year’s Eve. (It’s a good idea to get to Times Square early for the ball drop, but you don’t have to be that early.) He’s super goofy, and for some reason, he finds a guy who looks like John Leguizamo and randomly calls him his legal guardian. The fun part comes when the whole bus does a countdown together, a remix of “Auld Lang Syne” comes on and your tour guides go bananas.

On: The Downtown Experience
What happens: One of the best moments of all three tours comes when a talented rapper walks unbothered through traffic near One World Trade Center, turns to face the passengers and begins performing an original rap about how New Yorkers suffered and then came together on September 11. Although the song itself hits every note, what comes after—without giving too much away—is even more apt.

On: The Downtown Experience
What happens: Through the magic of virtual reality, experience a 360-degree view of what it was like to work at the New York Stock Exchange on Black Tuesday (it was very bad). As you look all around, you’ll learn a little bit from each detail—including the recreation of the New York Stock Exchange trading floor in 1929 and the reactions of devastated traders.

You get the story of West Side Story.

On: The Tour
What happens: As scenes from the classic movie play on the flat screens in front of you, you pass through the former immigrant neighborhood where West Side Story was filmed and learn how the movie was shot just in the nick of time—since the neighbourhood was being torn down to make room for Lincoln Center and other new development.

You ride the NYC subway on The Ride.

On: The Ride
What happens: The subway can get you virtually anywhere in our great city—and it can also be a little adventure, as The Ride wants you to know. As your bus drives above Eighth Avenue (with the A and C trains running right below), the surround-sound booms simulated train noises and the driver lightly swerves the bus to mimic the occasional herky-jerky motion of riding the actual subway. And just as you hear the train screech to a halt, the bus does the same.

Locals give it to you straight.

On: The Tour
What happens: As The Tour slowly makes its way out of Times Square, the Navigator (The Ride’s term for a tour guide or host) starts reeling off some sobering numbers: a penthouse in one of the skyline’s newest and coolest-looking additions—the curved One57—sold for a record $100 million.  Even landing a good spot to sell hot dogs is expensive, with some permits costing cart-owners more than $200,000 per year. That’ll make you understand why your dog costs $4. So: New York is the greatest City in the world, but there’s more than one reason they say if you can make it here… (etc., etc.).

On: All three!
What happens: The tour guides point out some gems that even New Yorkers may have overlooked. Who knew there was a block-long underground market attached to the Columbus Circle subway station, that the Maritime Ferry Building (a stop on your journey to Governors Island) is so beautiful or that the statue of the Kneeling Fireman gifted to New Yorkers after 9/11 stands outside an Emigrant Savings Bank on 43rd Street? After The Tour, we all did.

A comedy show gets rolling.

On: The Ride
What happens: Over upbeat music, fun facts and rounds of trivia, the comedian-guides prove they will do anything for a laugh (one tour guide, for example, spanked her behind against the glass for passersby)—but it’s all in good fun. When describing the seedy Times Square of the bad old days, they euphemistically say it was full of “independent contractors” and “freelance pharmaceutical reps.” And, as you look up at the super-tall Bank of America building, your guide says: “Bank of America recently acquired heaven in the last financial quarter.”

Those are just some of the highlights; you really have to participate in all of The Ride’s three experiences for yourself in order to get the full view of New York City’s glorious past, challenging present, and promising future in one ingenious, immersive package. 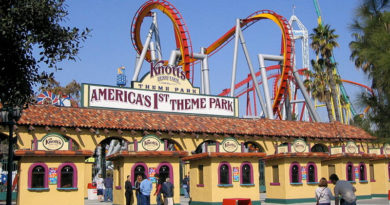 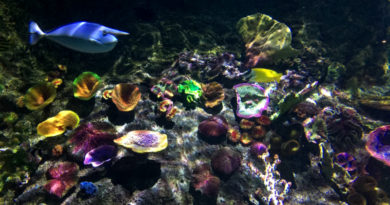 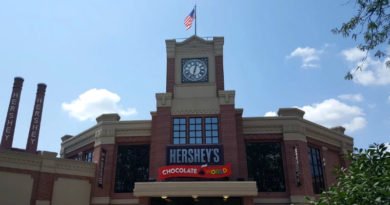