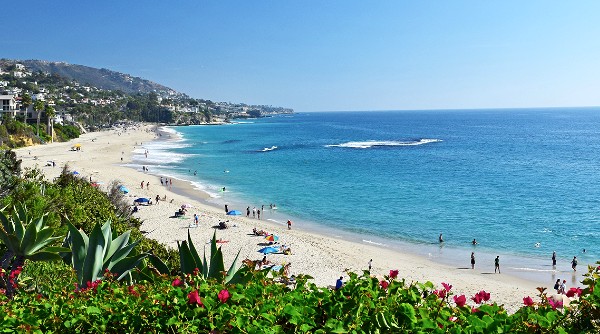 Take one part water, one part sand, one part sun-soaked coastal charm, and you’ve got the recipe for some of California’s most appealing destinations. The Golden State’s beach towns stand out for their relaxed, inviting spirit, their beauty, and their boundless ways to play. Whether you’re looking for a family-friendly destination or a romantic escape where the toughest thing to do all day is deciding what sunscreen to use, you’ll find the ocean-hugging town that matches your mood. 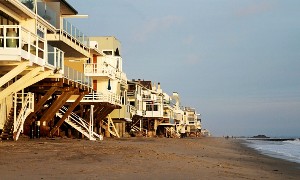 Stretching for more than 32 miles/51 kilometers along the Pacific, Malibu is a beach town like no other. Hollywood stars and top athletes escape to oceanfront homes on long strands of beach with front-row seats of surfers and unforgettable sunsets. Considered to have perfect waves, Malibu’s Surfrider Beach was named the first World Surfing Reserve; nearby Zuma Beach is a sun magnet for locals and families; aim for quieter weekdays if that’s your style.

You can shop for beach fashions, and maybe even spot one of many local celebs, at the Malibu Country Mart and Malibu Lumber Yard, two adjacent and upscale retail centers. Visitors will find dining and fishing on Malibu Pier (a great place to watch the action at Surfrider).  And, in winter, Point Dume at Malibu’s north end provides an ideal perch for spotting migrating grey whales.

Tough as it is to drag yourself away from the ocean, head inland a short distance and you can also hike through hills and canyons filled with spring wildflowers and even waterfalls on trails in Santa Monica Mountains National Recreation Area. 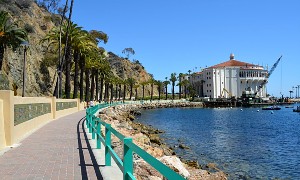 With its swaying palms, white-sand beaches, warmest water in summer, and melt-your-heart sunsets, Santa Catalina stands out as a pretty-much-perfect island getaway just 22 miles/35 kilometers off the Southern California coast. Catalina, as it’s most often referred to by locals, has all the things you’d want from an island retreat—appealing lodgings, fresh seafood dinners, plenty of family-friendly water sports—but it’s also got unexpected finds, including a star-studded history (Marilyn Monroe lived here), remarkable wilderness adventures, and even its own wine estate. Climb aboard a Catalina Express ferry for the 1-hour ride across the sea, or splurge on a 15-minute helicopter ride, for an easy escape to California’s ultimate island paradise.   Please see our in-depth article – Catalina Island – So Much to See and Do. 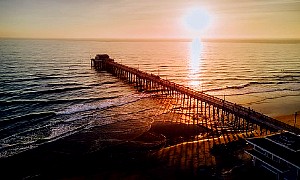 Look one way, and you’ll see oceanfront mansions and a yacht-lined harbor. Look another, and you’ll find historic cottages, dive bars, and a friendly controversy about ice cream bars. With its mix of high-end living and world-class surfing waves, Newport Beach offers both luxury and beach-town delights.

Like any glamorous icon of a certain age, this coastal town has changed its identity a few times over the years. Back in the 1830s, Newport Beach was a rancho known as Bolsa de San Joaquin, owned by a settler who preferred livestock to seafaring: he had 14,000 head of cattle and 3,000 horses, but no boats. Over the next century, the community first changed its name to Newport—in the 1870s, when the main industry was commercial shipping—then to Newport Beach in 1902. After that, the town increasingly attracted tourists and Hollywood elite such as Shirley Temple (crowned the first Miss Newport Beach at age 13), James Cagney (said to have won Collins Island in a poker game), and John Wayne, who moved here permanently in the early 1960s.

The city’s heart and soul still revolve around the harbor, which comprises two bodies of water. There’s Upper Newport Bay, an ecological reserve ringed by a 10-mile loop trail that attracts birders, joggers, equestrians, and cyclists. The four-mile-long Lower Newport Bay, meanwhile, features lovely shops and restaurants—especially in Cannery Village, Balboa Peninsula, and Balboa Island. The town also has a thriving surf scene, thanks to more than 8 miles of beaches and the bodysurfers’ bucket-list spot known as the Wedge, with raucous waves that can easily reach 20 feet in height. 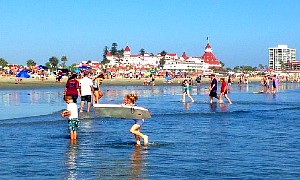 Like an island getaway a stone’s throw from the city, the appealing island community feels like a private enclave wrapped with perfect beaches, including ultra-family-friendly Coronado Beach. Besides those soft sands, the island’s crown jewel is the Hotel Del Coronado, built in 1888 and topped by russet red, castle-like turrets. Explore the lobby and grounds on your own, or join a guided tour offered by the Coronado Historical Association; docents share tidbits on the Del’s remarkable history and guest list (including Marilyn Monroe, who starred—alongside the hotel—in the 1959 comedy Some Like It Hot). The Del also serves a sumptuous Sunday brunch, and the Babcock & Story bar is fine for sipping a craft beer with views of the Pacific.

The diminutive island, reached by the arching Coronado Bridge, is easy to explore by bike. Rent one from Holland’s Bicycles to pedal past elegant oceanfront mansions and tended gardens, or visit Orange Avenue, lined with shops, restaurants, galleries, and theatres. More shops and art galleries are located at Ferry Landing, and restaurants like Candelas on the Bay and Peohe’s have expansive views of San Diego’s downtown skyline across San Diego Bay.

Travel tip: Traffic on the San Diego-Coronado Bridge can get thick, especially on summer weekends. Flagship Cruises will ferry you from Ferry Landing, across the Bay to Seaport Village. Water taxis are available too. 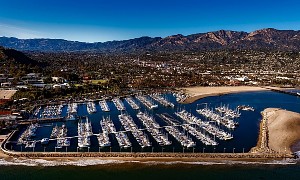 Bougainvillea twining across red-tiled rooftops, birdsong mingling with the ocean breeze, islands, and whale spouts on the horizon—Santa Barbara’s charms tempt at every turn. Perfect getaways don’t get much more perfect.

Take it from the movie stars who sneak away to Santa Barbara all the time—or just straight up move here. Oprah, Brad, Ellen, and other first-name’s-enough A-listers have estates here, many tucked away in the coastal enclave of Montecito. Why not? There’s that legendary Old World beauty that befits the city’s nickname, “The American Riviera.”

Santa Barbara has new energy, too—leafy streets lined with designer boutiques, a buzz-worthy food and wine scene, and a waterfront teeming with sailboats, kayaks, and stand-up paddle-boarders. Come and experience Mediterranean-style magic along the Central Coast. 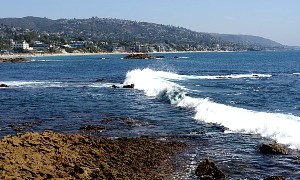 The southern origin of California’s Highway One offers some gorgeous drama, like beach town Dana Point. It was named after Richard Henry Dana, who first arrived there on a trading ship circa 1835 and was entranced by the romantic cliff-lined area.

The town has been wooing whale-watchers and water lovers ever since. In the 1950s and 60s, the right-breaking waves that tended to form here could produce 12-foot surf breaks known as Killer Dana and Doheny. A few blocks away, California’s first surf shop was opened in 1954 by Orange County local Hobie Alter.

Today, you’ll still find a Hobie Surf Shop, boutiques, and eateries along this stretch of Highway 1, as well as nearby Salt Creek Beach, Baby Beach, and Doheny State Beach. Otherwise, the town very much revolves around the harbor, which, when it opened in 1971, tamed Killer Dana. The quieter waters, though, created abundant options for kayaking, stand-up paddleboarding, sports fishing, and a lot of whale-watching.

Many of Dana Point’s hotels and eateries sit on cliffs above the harbor (like the Monarch Beach Resort and the Blue Lantern Inn) or on the water itself, such as the sustainable and locally sourced seafood offered at Waterman’s Harbor, or the mesquite-grilled fresh catches at The Harbor Grill. For a classic view, stroll along the Bluff Top Trail and, while looking out over the water for whales, check out the statue honoring 19th-century hide droghers—tradesmen who literally tossed hides over the cliffs to merchant ships anchored below. 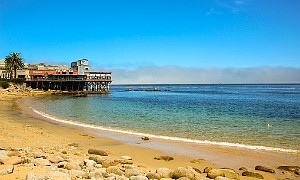 Wrapped by the Pacific on three sides, the Monterey Peninsula at once offers wind-tossed beaches and quiet coves, fine dining and casual eats, early history, and postmodern art. World-renowned Monterey Bay Aquarium, with its psychedelic jellies and bat-ray petting tanks, is a must-visit, especially for families. Step outside and find yourself among hotels, shops, and restaurants filling former fish-packing plants along Cannery Row, made famous by local author John Steinbeck. Rent bikes to follow the coast south around the peninsula to Pacific Grove, Asilomar State Beach, and the sea-and-spray beauty (and gazillion-dollar homes and celebrated Pebble Beach golf courses) along the 17-Mile Drive.

On Monterey Peninsula’s south side, explore artsy Carmel by the Sea (locals just call it Carmel), a town that deftly straddles the balance point of rich history and new wealth. The Carmel Mission is one of the state’s most beautiful, and shady trails fan out from the site into lush Mission Trail Nature Preserve. Stroll the white sands of dog-friendly Carmel Beach, or explore a mosaic of meadows, wave-battered bluffs, and wind-twisted trees at nearby Point Lobos State Reserve. Venture into Carmel Valley for bright sun if (when) the foghorn starts blowing. Then come back to Carmel’s main village, with gallery-lined streets, cozy gastropubs, and even cozier inns. 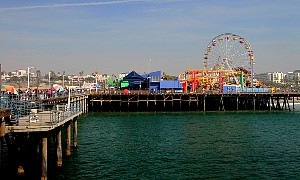 This oceanfront city, bounded by a 3½-mi/5½-km-long beach, feels like a weekend getaway spot even though it’s only 15 miles/24 kilometers west of downtown Los Angeles. Car-free options, including a shuttle to Los Angeles International Airport (8 miles/13 km south) make it a relaxing destination too, so you can hang out on broad beaches or the lively pier (complete with its own amusement park and rides) without having to stress about traffic or parking. Another great way to get around: rent cruiser bikes (rental shops abound) to follow the Marvin Braude Coastal Bike Trail. Known locally as “The Strand,” the paved, multi-use path follows the oceanfront for roughly 22 miles/35 kilometers, from Santa Monica south to Torrance. 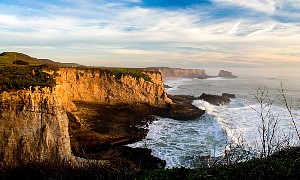 But at its heart, Santa Cruz is a surf town. This is where the sport was originally introduced in the U.S., and top surfers know that the place to be is Steamer Lane. Need more proof? Nearby lives Jack O’Neill legendary surfer and force behind the O’Neill empire, pioneer of the wetsuit and elder statesman of everything surf in the Golden State. 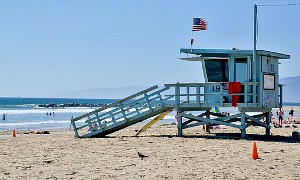 Bordering Santa Monica’s south side is Venice Beach—simply Venice to locals. This region, a blend of hip new condos and funky beach cottages, is famous for the quirky goings-on along its iconic beachfront boardwalk, where street entertainers and vendors create an unforgettable scene of local characters and happenings. Watch it all stream by from the loud and lively waterfront skate park, or sit near the daily drum circle on the beach (you can even grab a can and a stick—or anything that makes noise—and join in).

For edgy boutiques focusing on furnishings and fashions, explore boho-chic Abbot Kinney Boulevard, one of L.A.’s best shopping districts. Food trucks often pull up here, and there are plenty of places to grab a bite or a treat (consider N’ice Cream for decadent salted caramel gelato). Stop by Strange to blend your own perfume, buy a comfy-soft top at All Things Fabulous, or browse artsy jewelry at Altered Space Gallery.

Top 10 Things to do in Lauderdale & Miami – with video