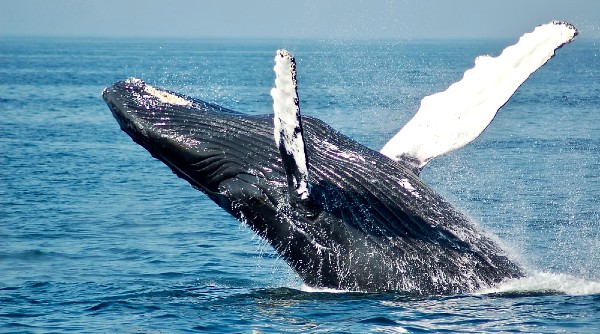 Whale Watching in The Azores

0FacebookTwitterPinterestEmail
If you are a lover of travel and wildlife with unforgettable up-close experiences, consider whale watching in The Azores.
The Azores, located in the middle of the Atlantic Ocean, is an archipelago of nine islands showing nature in its purest state, and one of the largest whale sanctuaries in the world.  Among resident and migrant species, common or rare, more than 20 different types of cetaceans can be spotted in the Azores. It is an impressive figure and it corresponds to a third of the total number of existing species.
There are also resident communities such as common dolphins and bottlenose dolphins, with which you can swim, and there are whales that use the Azores as a migration route. Spotted dolphins, sperm whales, sei whales, and baleen whales are more frequent in summer. Blue whales can easily be sighted in late winter. One thing is certain: whatever the season, there are always discoveries to be made.

The Azores are an ecosystem of unique features and waters rich in fish, so it is not surprising that whaling was an important activity in the past in many of the islands. Today, the whaling tradition has been transformed into a very popular tourist activity, and there are many points of departure, spread across the various islands, which serve as a base for those who want contact with these fascinating mammals.

On the Island of S. Miguel, especially in Ponta Delgada and Vila Franca do Campo, there are several operators specializing in whale watching throughout the year. Blue whales, the largest animals on earth, measuring about 30 meters and weighing up to 150 tons, are frequently sighted in spring in the channel between the islands of S. Miguel and Santa Maria.

On Terceira – either in Angra do Heroísmo or Praia da Vitória – there are various opportunities for whale watching, particularly tourist operators that offer programs that combine accommodation with sea activities. Of the many species whose migration routes make them visible from the island, the majestic blue whale, which passes between Terceira and S. Jorge in the spring and autumn, is especially worth seeing.

Pico is the island where the Azorean whaling tradition is most established, with operators in Madalena, Lajes, and Santo Amaro. There are various museums and ethnographic centers where you can learn more about the history of whaling and where its traditional arts continue to be preserved, most notably the Whaling Museum and the Ocean Arts and Sciences Centre (SIBIL) in Lajes, and the Whaling Industry Museum in Santo Amaro. For anyone wishing to go on one of these adventures, trips out to sea are thoroughly prepared on land by the skipper through explanations to visitors about the various species that it is possible to sight, how the trip will take place and the care and precautions that must be taken not to interfere with marine life.

Don’t be discouraged if sea conditions don’t allow your whale watching trip to take place. There are several museums and information centers onshore, particularly on the islands of Pico and Faial, which provide an interesting and engaging alternative. Another possibility is to visit the whale lookouts scattered around strategic points on the various islands, with amazing panoramic views.

When whale watching, there are moments that only occur once in a lifetime, so don’t forget your camera to record that unique encounter… take our word for it, the experience is fantastic and the whole family will love it!

Favorite 5 All-Inclusive Resorts in the US