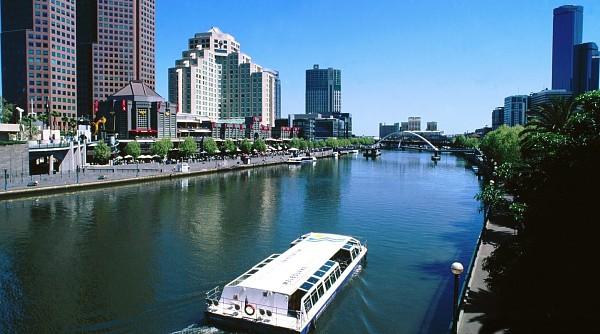 No matter where you go in Australia, there is always plenty to see — both natural and manmade, especially when it comes to visiting the cities. One of the best ways to see Melbourne is by taking the City River Cruise along the Yarra River.  Hop aboard at Federation Square to experience the river, see the beautiful skyline and all the city has to offer.

City River Cruises offers 2 different cruises leaving from the same site – one which explores the Yarra River through the Docklands, another that cruises upstream the Yarra River to offer views of The Royal Botanical Gardens and the various facilities in Melbourne’s sports precinct.  For our Saturday morning cruise, we chose to explore the Docklands.

⦿ To watch our Yarra River Cruise, visit our YouTube video HERE and be sure to use the highest quality playback settings. Or, keep reading for valuable information and photos of this cruise.

The staff at the ticketing booth and located at the dock were friendly and welcoming.  The City River Cruise boats are on the older side but were well maintained and outfitted with plenty of seating to accommodate large groups of tourists, both inside and outside the covered areas of the boat.

Another nicety is the complimentary tea and coffee for passengers, which was a pleasant touch given the cool breeze coming off the Yarra River as we cruised through the city.

As we journeyed down the Yarra River we passed by some of Melbourne Central Business District’s iconic buildings, such as Flinders Street Station as well as modern additions to the city skyline such as The Crown Casino, the Aquarium, the World Trade Centre, and Melbourne Exhibition Centre. Onboard, a member of the City River Cruise staff provided commentary about the history of Melbourne and some of the buildings, as well as the bridges traversing the Yarra River.

As we left the city, we entered the Docklands neighborhood and the Port of Melbourne – an area of Melbourne not particularly known for its beauty, but hosts one of Australia’s largest ports for containerized and general cargo. This part of the trip lasts approximately 20 minutes and features ongoing views of cranes and shipping containers.  The narration ends during this part of the tour, likely because the bustling Docklands are self-explanatory given the high visibility of import and export receptacles.

We found this one-hour cruise to be relaxing and informative, filled with the sights of the city and the booming industrial district of Melbourne. Though the Port of Melbourne was somewhat interesting (albeit repetitive) the city views more than made up for it and they were absolutely lovely.  Certainly, this tour is a great way to get a new perspective of the city

With a modest ticket price, City River Cruises up or down the Yarra River is a nice way to spend an afternoon after having lunch at one of Melbourne’s famous alleyways.  Though it’s not a ‘thrilling adventure’, it’s definitely a good way to unwind and get a new viewpoint of Melbourne that just can’t be had on land.

Top 10 Things to do in St Augustine, Florida