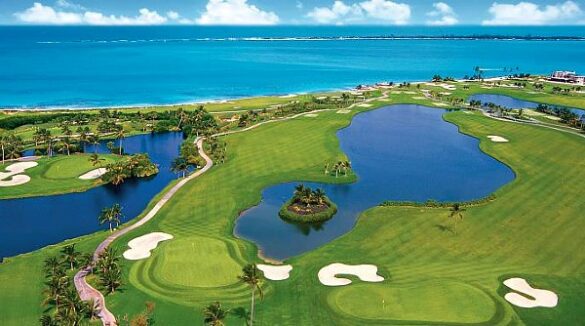 Looking for the best golf course in the Bahamas?  You’ll find it at Ocean Club on Paradise Island – the tiny but gorgeous little strip of land that connects to Nassau by a bridge.

Most widely known for the mega-resort known as Atlantis at one end of the island, Paradise Island also hosts The Four Seasons Ocean Club Resort, as well as a private and upscale gated community.  Among those high-end amenities at Ocean Club is the Tom Weiskopf-designed Ocean Club golf course.  As one might expect, getting a tee time here might prove difficult unless you’re a member, a resident, or staying at one of the resorts.  If you’re lucky enough to fall into one of those categories, then prepare yourself for one of the most scenic courses you’ll find in the Caribbean.

Although oceanside courses are not unique and can be found throughout Mexico, the Caribbean, California, and Polynesian Islands, most are set atop cliffs wherein the turquoise water of the ocean swirls below.  At Ocean Club; however, the 7,159-yard course sits at sea level, allowing players the perfect view from almost every angle.  But bear in mind that beauty often is accompanied by danger – in this case, it’s the fact that the ocean poses a natural hazard so it’s every bit as easy to lose a ball in the water as it is to land in a bunker.

For example, on Hole #4, which is 456 yards, the water sneaks up at high tide and comes ever so close to the green that novice and seasoned players alike are apt to drive the ball into the drink.  The same is true for the 552-yard 6th Hole which is surrounded by bunkers yet likely less sand exists on the thin slice of beach that separates the course from the ocean.  And again, at Hole #17, we see a 281-yard set-up that runs parallel to the Atlantic and presents a taunting hard drive across a stretch of beach.

If you’re paying attention here, the name ‘Ocean Club’ could not be more appropriate.  But it’s not just the ocean that poses water hazards – the course is littered with them as ponds and lagoons come into play, presenting as much in the way of challenges as they do scenery.  Add to that the swaying palm trees and gentle ocean breeze and you’ve got yourself a setting just like a resort.

With this in mind, Ocean Club isn’t where the heavy hitters tend to frequent because it isn’t about the game as much as it is about the experience.  After all, Paradise Island isn’t known for its golfers, it’s known for its vacation allure.  And this place has it in spades.   The course is enough of a challenge to feel like a good game of golf while simultaneously feeling like you’ve just strolled through paradise – Paradise Island to be exact.