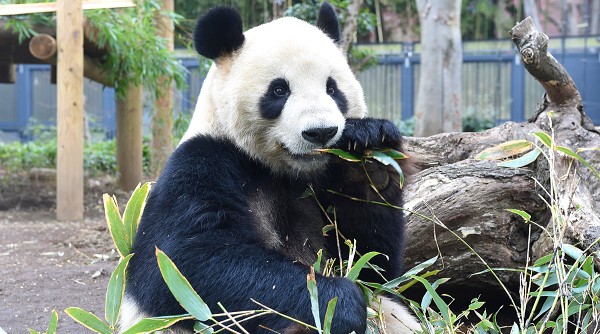 Favorite 5 Aquariums and Zoos in Tokyo

Japan has an abundance of beautiful and unique aquariums, zoological parks, and botanical gardens located in every region of the country, all of which draw a large crowd.  Tokyo, in particular, has several facilities that fall into this category, chock full of entertainment and education, beauty and wonderment, and memories to last a lifetime.

If you plan on visiting this vivacious city, here are our Favorite 5 Aquariums and Zoos in Tokyo. All of the park names are clickable so you can visit the website for additional information, such as park hours, ticket prices, special events, etc. 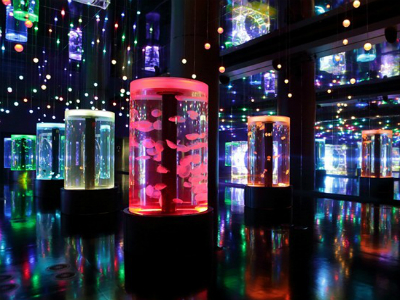 (Ibaraki Prefectural Oarai Aquarium) is one of Japan’s largest aquariums, with a total floor area of about 19,800 square meters, in an area facing the Pacific Ocean in Oarai Town. Here, you can meet 68,000 sea creatures of about 580 species.

Highly recommended to see while at the park is the Seas of the World Zone, particularly the area that houses 48 species of sharks and the tank exclusively developed for ocean sunfish, a popular fish with a unique shape and winsome expression. The Museum Zone is also very interesting, and the children will love Kids Land; surprisingly, the largest facility in the aquarium. You can actually touch the fish here, and there is play equipment resembling the ocean’s creatures.

Ocean Live is an entertaining dolphin and seal show which is held four times a day so there’s no excuse to miss it. Visitors can also witness meal time for penguins, visit a 1300-ton tank in the Encounter Sea Zone, and marvel at the Deep Sea Zone, where you can encounter some pretty strange creatures from the ocean’s mystical depths. Plan on spending the whole day at the park because Aqua World will keep the entire family busy for hours and hours. 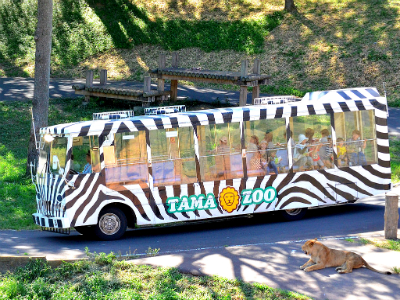 Created to make the most of the lush area on which the park sits, Tama Zoo sits on 50 hectares and allows its animals to roam freely so they can be observed in their most natural state.

The zoo consists mainly of four distinct areas, namely the African Garden, the Australian Garden, the Asiatic Garden, and the Insectarium, where 350 species of mammals, birds, reptiles, and amphibians are kept. The zoo is famous for being the first in Japan to raise koalas, as well as introducing the Lion Bus, which enables visitors to view a pride of lions up close – actually, very close, especially when the lions are situated on their elevated perch which brings them eye-level with the bus windows and face to face with the passengers.

The Asiatic Garden is home to one of the world’s largest skywalks, which has become highly popular due to the orangutans playing and roaming over a rope course measuring a total of 150 meters. The zoo is packed with a wide range of other attractions too, including the Insectarium, which you can walk among 700 species of butterflies from around the globe as they flutter around your head.  Then there is the walk-in aviary at the Asian Marsh Zone, and the Mole House, where visitors can watch moles in their tunnels. In addition, rabbits and guinea pigs present an interactive experience at Acorn Plaza. 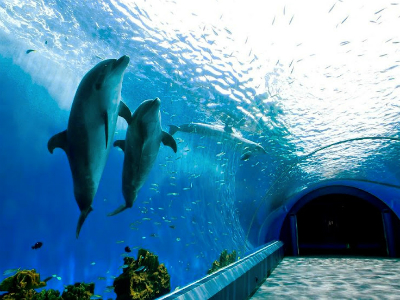 This park sits on a man-made, 240-thousand square meter island, where visitors will find 3 aquariums, an amusement park called Pleasure Land, as well as a hotel, restaurants, and shops.

The first of the 3 aquariums is Aqua Museum, home to 100 thousand creatures of 500 species. Aqua Museum has a distinctive pyramid-like appearance and consists of five floors where visitors can become familiar with every creature living in and by the sea. Most uniquely, this aquarium features whale sharks, the largest fish in the world. And as you can imagine, it’s a huge draw for visitors.  The second aquarium, called, Dolphin Fantasy, features dolphins, of course, in a tank the shape of a tunnel so that visitors can observe from below.  And finally, Fureai Lagoon (meaning Interaction Lagoon) allows guests to experience sea creatures by touching and playing with fish.

At Pleasure Land, visitors can enjoy a wide range of attractions and thrill rides, including Blue Fall, which is a vertical drop ride that is the biggest drop in Japan. 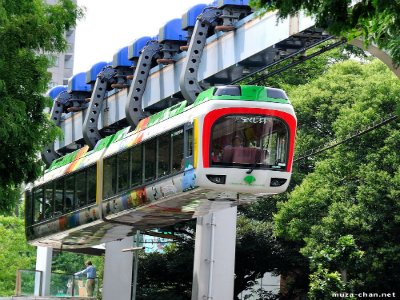 The eastern part features varied displays on the hilly area of Ueno Park. Especially popular are giant pandas becoming a symbol of the 1972 normalization of diplomatic relations between Japan and China. Adorable Ri Ri (Male) and Shin Shin (Female) attract visitors by the thousands. The eastern part also has created living environments similar to natural habitats, such as forests for gorillas, tigers, and elephants, hills for bears and others, and sea for polar bears and seals.

The western part of the zoo captivates visitors with the beauty of the lotus-clustered Shinobazu Pond. African animals, such as giraffes, hippopotamus,  and aye-ayes are kept here, as are 50 species of amphibian and reptile.  This part of the zoo also contains a children’s petting zoo of mainly farm animals.

The zoo also features historical structures, such as the five-storied pagoda of the old Kan’ei-ji Temple, rebuilt in 1639, the Kankan-tei tea house built in 1626 and rebuilt in 1878, and the old front gate of a Japanese Versailles-style structure. 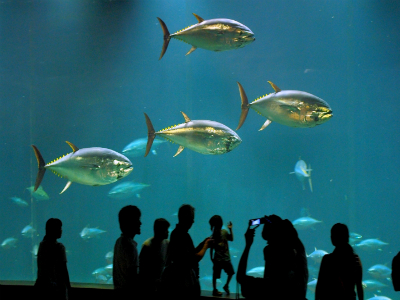 -This park captivates visitors with a huge glass dome, displaying rare marine life from the Pacific, Indian Ocean, Atlantic, Arctic, and the Antarctic. Especially thrilling is the Bluefin tuna darting swiftly around in a huge 2,200-ton donut-like tank under the glass dome. It is the world’s first facility in which pelagic fish swim in a cluster and succeeded in spawning.

The aquarium is also known for its exhibition of penguins, one of the largest in Japan, raising Humboldt, Rockhopper, Fairy, and King penguins that can be observed both on land and in the water. It also exhibits the world’s largest kelp, a cluster of sea algae from California, various marine environments of Ogasawara Islands, Izu Seven Islands, and Tokyo Bay to show sea life in Tokyo, and seabirds, like tufted puffin and murre, swimming at a dazzling speed underwater.

In addition, the aquarium has a display of duplicated freshwater life that existed in Tokyo when it was rich with nature. Motsugo Psedorasbora Parva fish, which are rarely seen in Tokyo nowadays, are in some ponds and marshes.