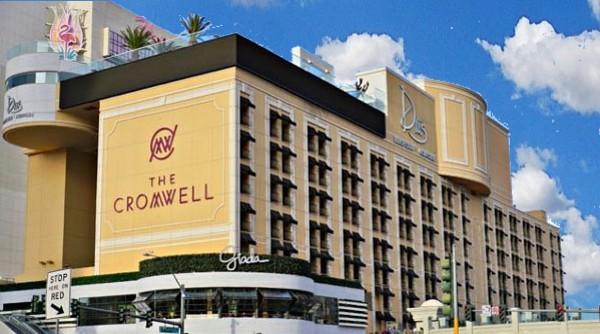 Review of The Cromwell – Las Vegas

Located at the Four Corners of the Las Vegas Strip, The Cromwell sits on the property where the Barbary Coast once called home.  And, it is now the complete opposite of the type of hotel that Sin City is used to boasting. Instead of a mega-roomed beast of a property, Vegas has unveiled a new and rather a rare concept for the region – a boutique hotel.

This hotel features just 188 rooms and suites, which are decked out in rich burgundy and purple hues fit for royalty.  Masculine in their décor with black leather couches, leather headboards, steamer trunks as small coffee tables, and large wooden armoires, the rooms look and feel dark and heavy with a steampunk flair.

Accommodations come with 47-inch flat-screen TVs and top-of-the-line MUK hair products in the bathroom.  Saucy artwork hung in the sitting area depicts Vegas showgirls cavorting with shirtless players.  To say that the rooms are designed for men would be sexist and assuming.  However, at the risk of sounding politically incorrect, they do have a look about them that seems perfectly suited to a bachelor’s weekend. Compared to this hotel’s parent property of Caesar’s Palace, which boasts a whopping 4000 rooms brightly decorated in warm shades of taupe and butter, The Cromwell appears to be the rebellious Goth offspring. 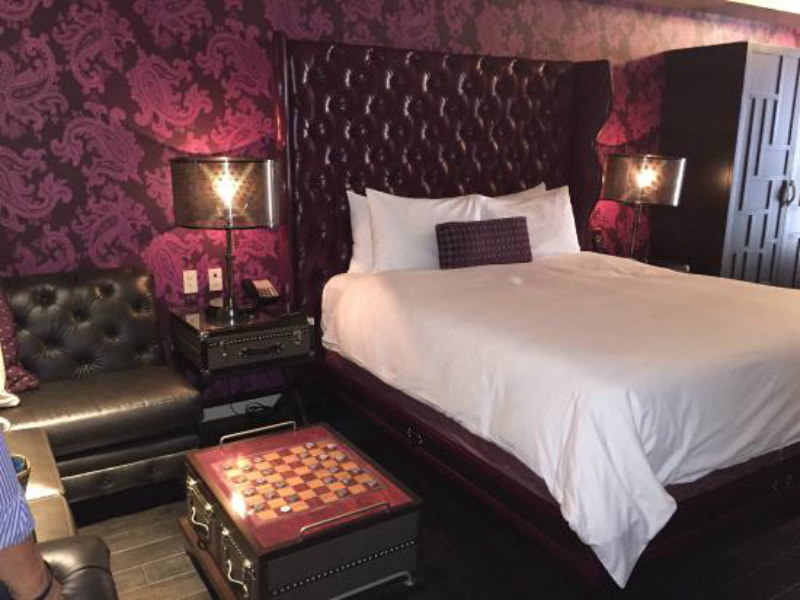 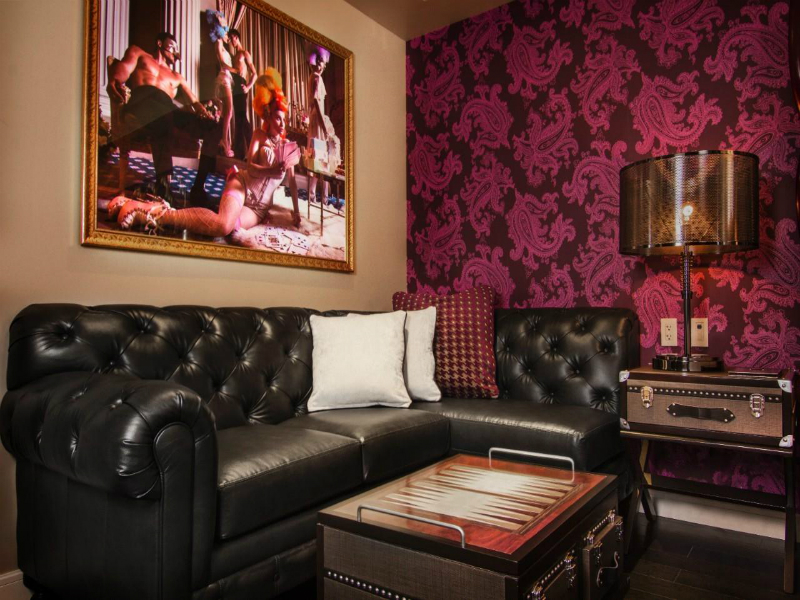 Unlike most other Vegas properties that tout a multitude of restaurants, lounges, and bars, as well as a showroom or two and usually a wedding chapel, The Cromwell is more than content with minimal amenities. These would include a stylish Italian restaurant called Giada, named after chef Giada de Laurentiis, a tasteful bar called Bound by Salvatore, which specializes in unique cocktails, and Drai’s Beach Club which stokes the fire of one of the best pool party atmospheres in all of Vegas. This combination of nightclub and pool, located on the hotel rooftop, is known to rock around the clock, so if you think The Cromwell’s very British name is an indication that the hotel is quiet and stuffy, think again.

The view alone is enough to make guests want to celebrate while overlooking the Four Corners, including Caesar’s Palace across the street and the Bellagio sitting kiddy corner. DJs along and well-known live entertainment, which has included performers such as Iggy Azalea and Chris Brown in the past, play among Drai’s VIP tables and pink and black booths while surrounded by a deluge of LED lights. 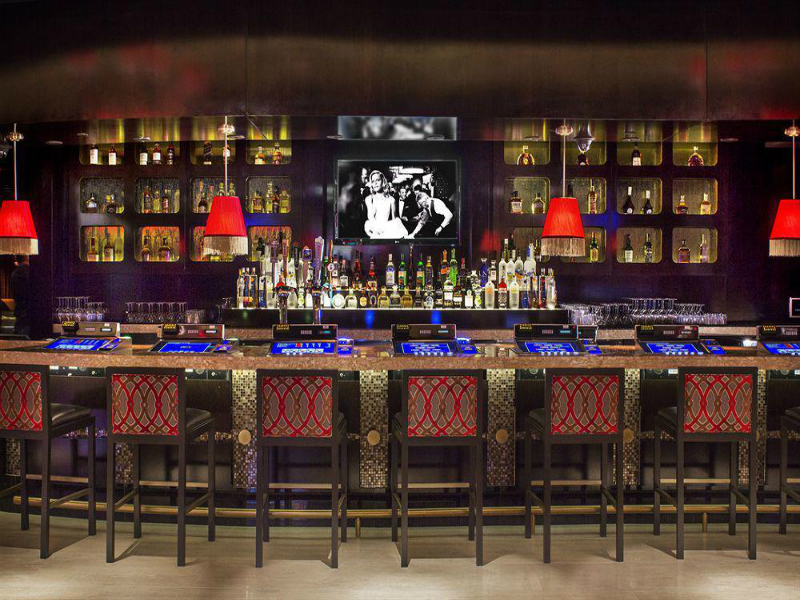 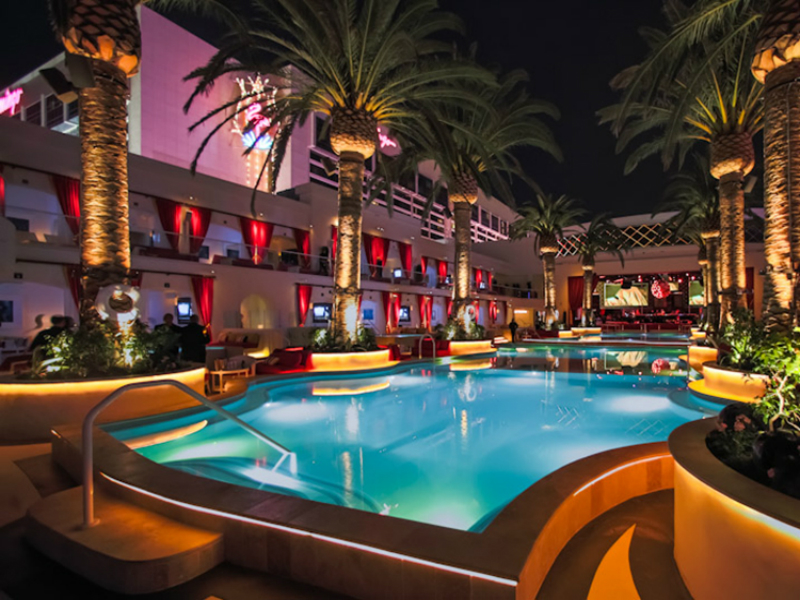 However, if you want to do more than just party, you’ll find an outstanding concierge service here that will be able to help with any plans you wish to make.  But if you’d prefer to research your destinations and make your own plans, the hotel provides free Wi-Fi throughout.

Given The Cromwell’s ties to Caesar’s Palace and its properties, a series of walkways and bridges connect the hotels with access to Caesar’s Forum Shops – an upscale, indoor shopping complex adjacent to Caesar’s.  As well, there is the LINQ Promenade – an open-air compound hosting retail, dining, and entertainment, just one property away, located next to the Flamingo.

PROS: Location.  The property is relatively new in comparison to many hotels on the Vegas Strip, so it’s still stylish and clean.  Boutique service.

CONS: Rooms are on the small side and are decorated with the younger guest in mind.  Drai’s Beach Club and pool party scene make this hotel a magnet for a young crowd of partiers.  If you’re looking for a quiet and more subtle experience, this is not the ideal hotel destination.

All considered, The Cromwell’s boutique status makes this conveniently located hotel small by Vegas standards, but it’s undeniably big when it comes to value and FUN!