Review of The Luxor – Las Vegas

If you’re looking for value on the Vegas Strip, consider the Egyptian-themed Luxor, situated on the southern end of Las Vegas Boulevard and flanked by two other theme hotels — the medieval castle-like Excaliber to the south and the tropical Mandalay Bay to the north.

The Luxor is an architectural wonder with specially designed ‘inclinators’ (as opposed to elevators), that transport guests from the hotel levels to the guest floors while traveling on the same incline as the pyramid.  The motion takes a little getting used to, but it’s definitely interesting. 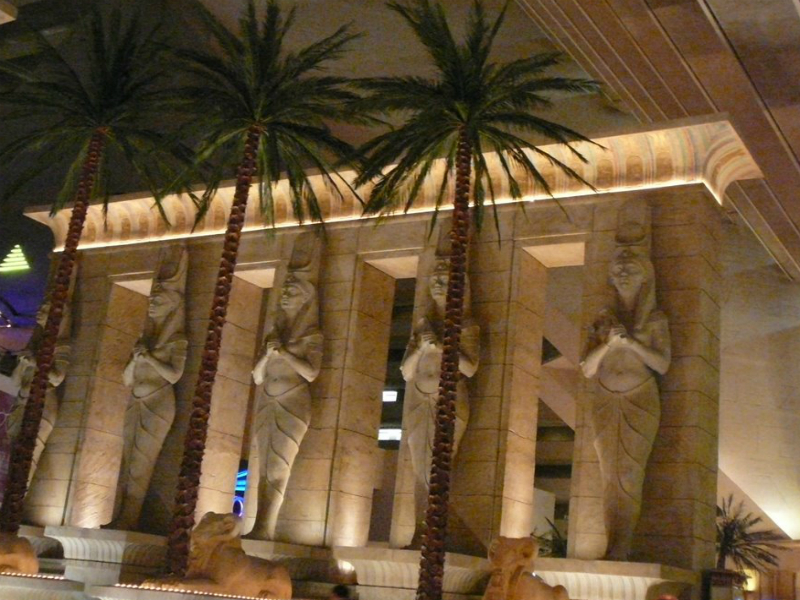 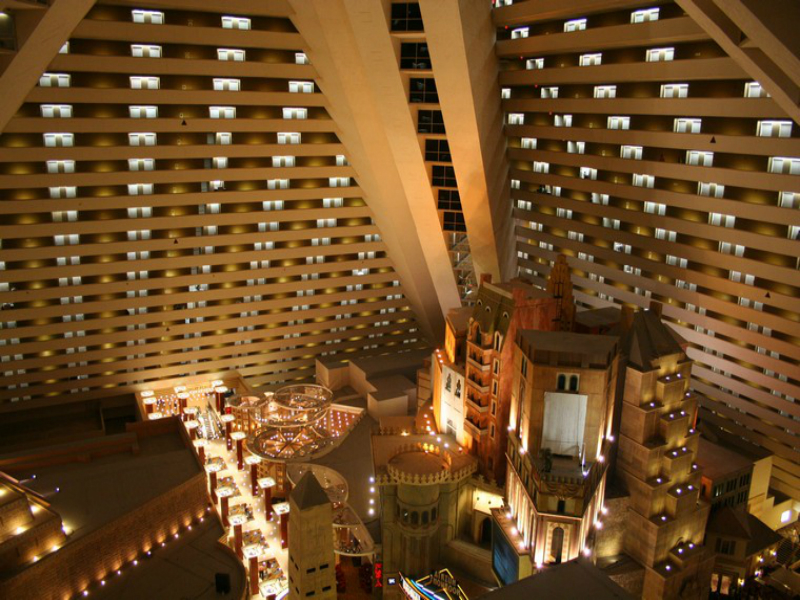 Looking Down from Room Level

This resort, which was built to be similar in size to the Red Pyramid in Egypt, was designed at a time when Vegas favored theme-based resorts as the city attempted to encourage family vacations.  As such, the Luxor is a bona fide attraction, complete with hieroglyphics and statues of Pharaohs strewn throughout the common areas, and seen on a smaller scale within the rooms.  King Tut is an obvious running motif.  In recent years; however, as Vegas has moved away from concept hotels and has returned to an adult setting, the Egyptian décor has been scaled back within the rooms, leaving behind a hotel that retains its theme without hitting guests over the head with it.

With a massive entrance designed to look like a sphinx, this enormous property boasts a whopping 4,406 rooms within the pyramid and two towers.  Broken down, the 30-story pyramid contains 2455 deluxe guest rooms and 234 spa suites – ‘spa’ due to in-room whirlpool baths situated near the window so guests can watch the action on The Strip.  The double 22-story black glass towers contain 1950 deluxe guest rooms and 237 suites. 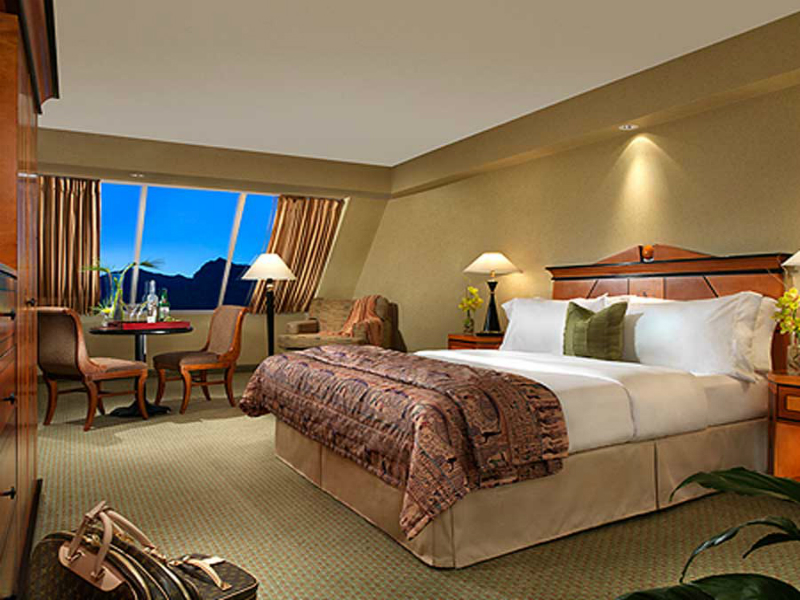 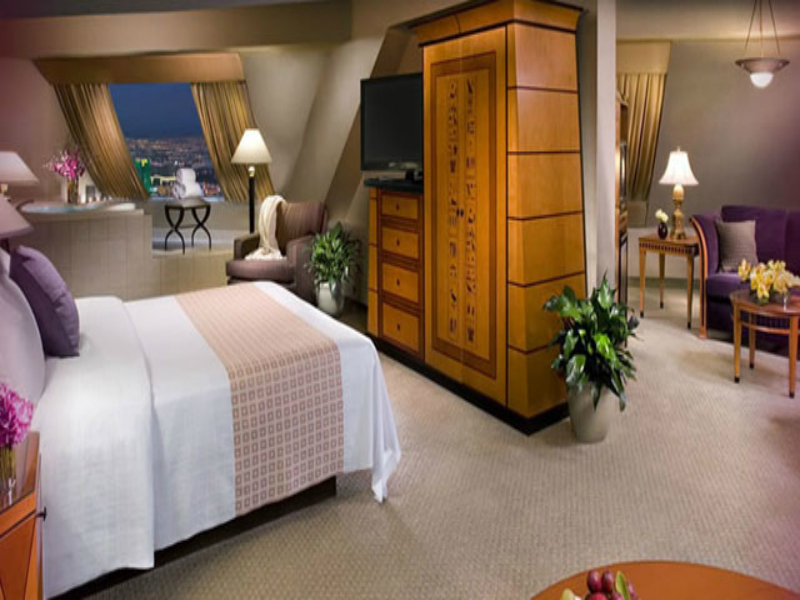 The complex also houses a 120,000-square-foot casino (one of the largest on the strip), two wedding chapels, 20,00 square feet of convention space, a spa called Nurture, a variety of dining options, on-site entertainment and nightlife including 7 nightclubs and lounges, and an absolutely gorgeous 5-acre poolscape featuring four seasonal pools – two of which open on weekends only.

VIP seating around the pool comes with padded chairs and a moderate price tag. Twelve private cabanas are a more expensive option (even more expensive on weekends) but come complete with flat-screen TVs, phones, well-stocked refrigerators full of drinks, and bowls of fruit.  If you don’t mind shelling out the money, it’s a nice way to stay out of the desert heat while spending the day poolside.

Additionally, the Luxor touts a top-rated golf course called Shadow Creek and a complimentary 24-hour tram that shuttles guests between The Excaliber and Mandalay Bay. 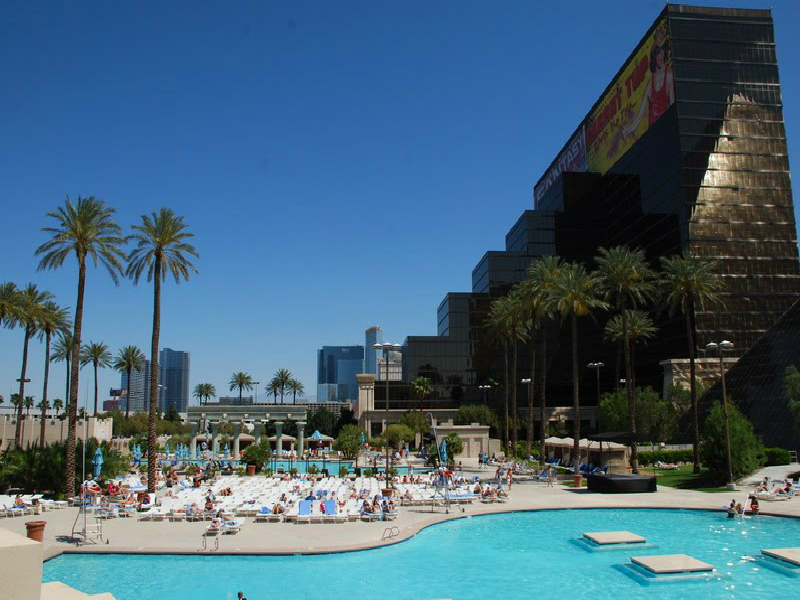 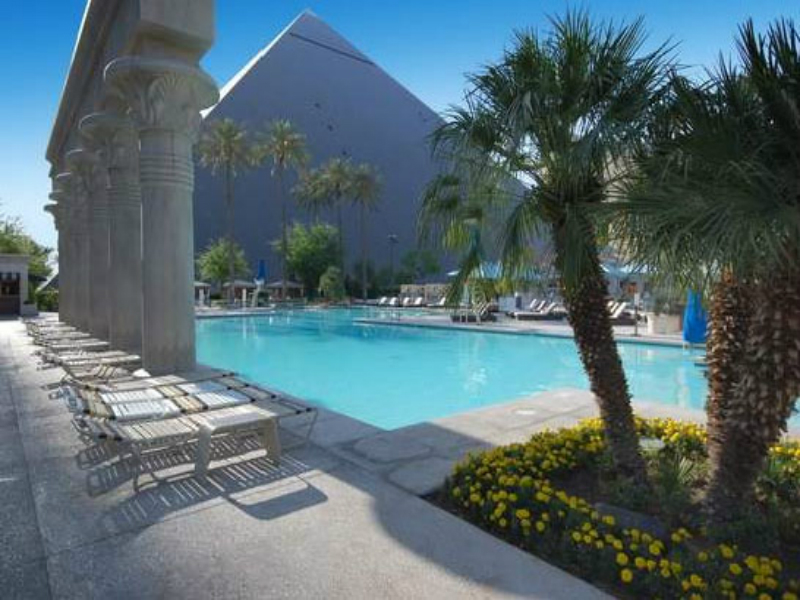 One of Four Pools

On paper, the Luxor sounds like a 5-star luxury resort – located anywhere else in the world it likely would be.  But by Vegas standards, this property has found its place securely within the middle ground of the Strip, whereby it far surpasses such hotels as The Excaliber and Circus Circus (two popular lower-end theme hotels) but it can’t begin to compete with the extravagance of such destinations as The Wynn or Bellagio.  This middle ground area bodes well for travelers who are looking for a reasonable deal but not at the expense of comfort, convenience, and some class.

If pressed to name some drawbacks, they would include noticeable wait times at the check-in desk during peak hours, and that pyramid rooms are growing older and dated in their décor.  Also, views from select tower rooms are very poor. Some guests (our reviewers included) see this as a turnoff and opt for a pyramid room or suite despite that tower rooms are more modern. However, beware that pyramid rooms contain sloped windows.  They help to form the pyramid’s shape but they ultimately encroach on the square footage of the room.  Like the inclinators, they take some getting used to.  If you’re someone who enjoys looking outside, you’ll likely take a few bumps to the head before you learn to approach the window differently, especially if you’re tall.  Speaking of inclinators, they are found only in the corners of the pyramid so getting to and from your room often entails a LOT of walking and crisscrossing the casino floor.

CONS: Long lines at check-in. Limited views from many of the rooms. Long walks to inclinators (elevators) if staying in the pyramid.

Everything considered the Luxor is a Vegas hotel that offers a lot of bang for your buck – a lot of pros, very few cons.