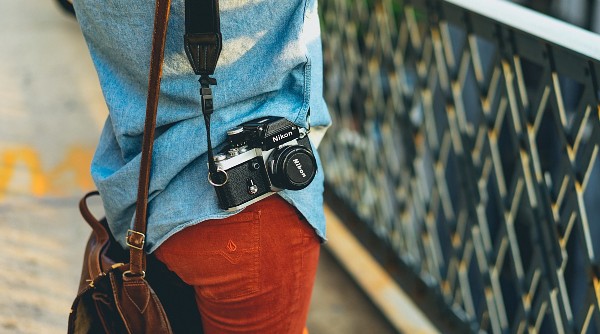 The best way to begin planning is to decide on a destination. For some, this task might be quite easy.  For others, a little inspiration might be of help to you.  So, let’s examine some of the world’s most visited tourist attractions. Although there are hundreds of popular locations that travelers tend to build into their vacations, these are considered the Top 10 in the order of their number of annual visitors.

⦿ To watch our video version of this article, visit our YouTube video HERE and be sure to use the highest quality playback settings.  Or, keep reading for valuable information and links to the attractions. 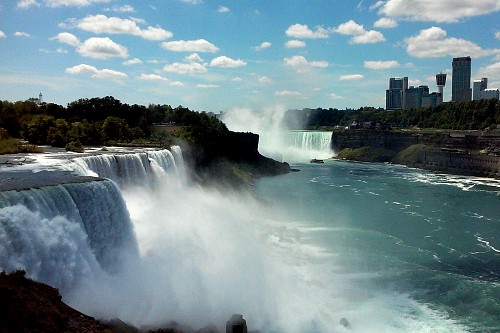 Niagara Falls is a tourist mecca, no doubt about it.   This tourist hot-spot welcomes approximately 30 million people annually, all of whom come to see the thunderous waterfalls that straddle the international border between Canada and the United States.

Over the years, the city has been reshaped and reinvented to keep up with the times and the changing wants and needs of tourists – from early day motels, cafes, and observation towers to modern-day casinos and nightlife, and a skyline of skyscraper hotels and chain restaurants.  Meanwhile, wax museums and a variety of souvenirs and candy shops have remained constant.

Niagara Falls offers visitors a variety of places to stay and a multitude of things to see and do, ranging from natural to man-made attractions.  To learn more about the area, visit our article Destination: Niagara Falls HERE.

2.  The Great Pyramid of Giza, Egypt 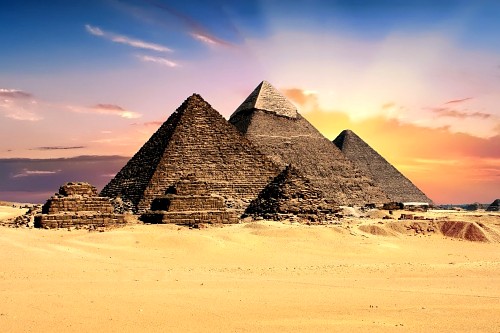 As the oldest of the Seven Wonders of the Ancient World, the Great Pyramid of Giza also goes by the name Pyramid of Khufu.  It is the biggest and oldest of the three pyramids that border Giza in Greater Cairo, Egypt, and has held up the best over the years, remaining mostly intact. Originally, the structure was 146.5 meters (481 feet) in height and was considered the tallest man-made formation in the world.  That title lasted over 3,800 years.

The Great Pyramid is comprised of 2.3 million blocks of Tura limestone that archeologists believe were carried from neighboring quarries across the river. The largest granite stones, weighing in at 25 to 80 tonnes and make up the King’s chamber, are thought to have been transported from Aswan, located over 800 km (500 miles) from the construction site.

A marking found in an interior chamber identifies the work gang that carried out the construction over what is believed to be a 10-20-year phase, ending in 2560 BC. Additionally, the mark alludes to the Egyptian pharaoh Khufu, thus giving the pyramid its name.

The Pyramids of Giza see a whopping 14.7 million visitors each year.

3.  The Great Wall of China 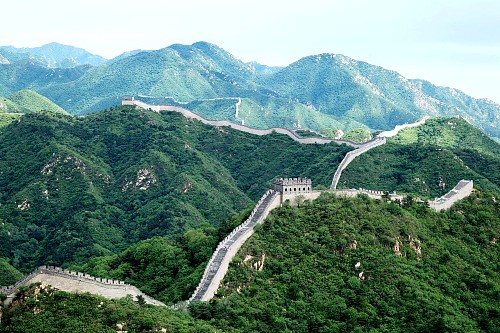 Although the name would suggest that the Great Wall of China is one continuous wall, it is the group name given to a series of defense structures built across the northern borders of China.  This system was put in place to help protect and strengthen Chinese territories as well as for border control and regulation of trade.

Many of the walls were built in the 7th century BC and in 220-206 BC were joined by Qin Shi Huang, China’s first emperor. The most famous sections of the wall were erected by the Ming Dynasty (1368–1644). Altogether, construction has spanned over 2000 years.

Today, the Great Wall stretches almost 13,000 miles across the mountains of northern China, with approximately 3000 miles having been reconstructed, and a few hundred miles available for tourists to experience. The number of tourists is an astounding 10 million a year. 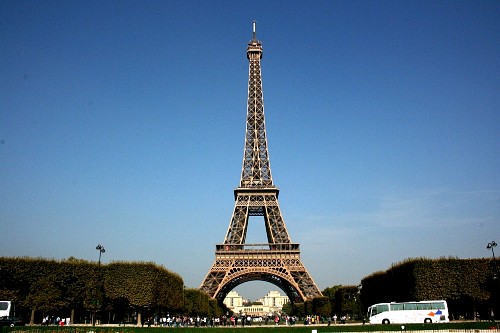 Paris! This city is on the bucket list of most world travelers due to its history, beauty, and famous landmarks, including the ever-popular Eiffel Tower. The 1,063-foot iron lattice tower was built between the years 1887-1889 as the entrance to the 1889 World’s Fair and was named after the engineer that designed and built it – Gustave Eiffel.

Three levels of the tower are available to visitors, with restaurants located on the first and second levels and the upper platform offers 360-degree views of the city. This viewing level is 276 m (906 ft) above the ground.  The climb from the ground to the first level presents a challenge of 300+ steps, followed by a second climb to the second level of the same number of steps. Although a staircase leads to the viewing platform, it is usually accessible only by elevator

Another way to get a good view of the tower from the ground is to go to the Arc de Triomphe, just a 20-minute walk away.  The Eiffel Tower receives approximately 7 million visitors annually. 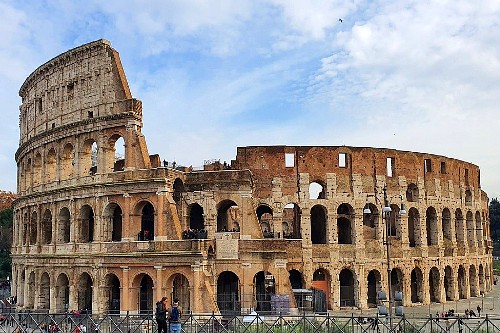 Today, the remains of the Colosseum are a must-see for visitors to Rome, with a reported 6 million visitors annually. 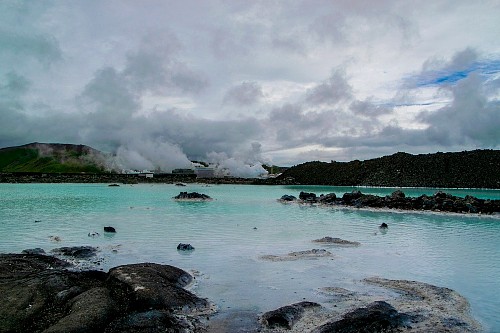 The Blue Lagoon, otherwise known as Bláa lónið (Icelandic), is a geothermal spa located in a lava field in southwestern Iceland. It is approximately 20 km (12 mi) from Keflavík International Airport and has become of the most popular and visited attractions in Iceland.

The man-made body of water looks milky blue in color due to a high content of silica, which forms a soft mud-like consistency on the bottom of the lagoon. The water is also plentiful in salts and algae.

People flock to the lagoon for bathing and swimming, especially as the comfy temperature averages 37–39 °C (99–102 °F). However, do not expect just to jump in. Guests are required to shower before entering the spa, using the provided communal shower facilities. The spa is not suitable for children under 2 years of age. Ages 3 – 8 are allowed only with the use of arm floaters, which are provided for free. Those with disabilities and wheelchairs are also made welcome with private change rooms and a ramp that extends into the water.

It is estimated that 2.3 million people visit the Blue Lagoon every year. 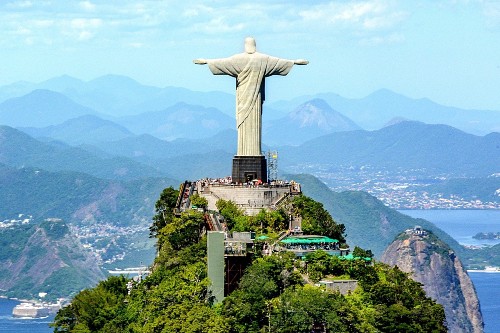 Christ the Redeemer is visited by almost 2 million people each year. It is recommended that guests attend on a day with clear skies to obtain the most stellar views. To view our video of the Best Things to See and Do in Rio, click HERE. 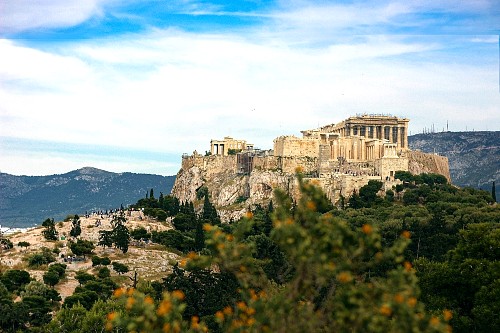 The Acropolis is an ancient citadel situated on a rocky ridge above the city of Athens and consists of remnants of several buildings of historic and architectural importance, the most prominent of which is the Parthenon. The word acropolis in Greek loosely translates to ‘highest point city’.

Although inhabitants of the site date back to the fourth millennium BC, it was the 5th-century BC statesman and general, Pericles, who organized the creation of the Parthenon, the Propylaea, the Erechtheion, and the Temple of Athena Nike. Sadly, these were critically damaged in 1687 during the Morean War when gunpowder that was stowed in the Parthenon was struck by a cannonball and subsequently exploded.

Throughout the years, much in the way of repair or reconstruction took place, with additional buildings added along with a monumental gateway that served as an entrance. Today, the Parthenon sits in the center of the Acropolis, to the south of the entrance sits the Temple of Athena Nike, east of the entrance is the temple Erechtheum, and south of the platform, the Theatre of Dionysus can be found, though this structure has undergone several remodels. The now partially reconstructed Odeon of Herodes Atticus sits a few hundred meters away.

Precious ancient artifacts are located in the Acropolis Museum, 280 meters from the Parthenon. Approximately 1 million tourists visit the Acropolis each year. 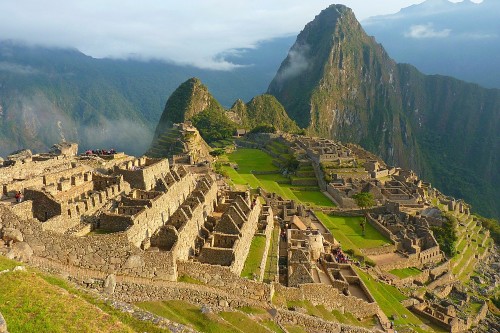 Located on a mountainside in the Eastern Cordillera of southern Peru, lies Machu Picchu, the most recognizable image defining the Inca civilization. Most archaeologists believe this ancient city was built in the 1400s as an estate for the Inca emperor Pachacuti who lived 1438-1472. The city was later abandoned during the Spanish conquest. Although locals knew of the ruins, it was not until 1911 that explorer and historian Hiram Bingham brought global attention to the site.

For many, Machu Picchu is on their bucket list of destinations to visit, with approximately half a million exploring this site each year.  To view our video tour of Machu Picchu, click HERE. 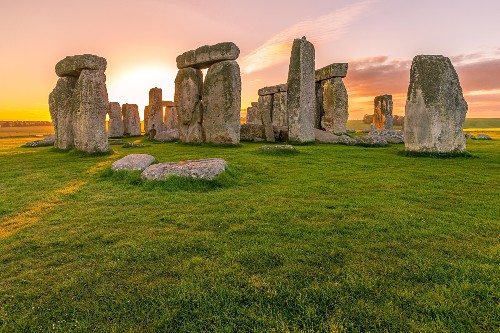 This prehistoric monument is one of the most famous landmarks in the United Kingdom and is considered a British cultural icon. Located in Wiltshire, England, approximately two miles (3 km) west of Amesbury, the composition entails a circle of tall standing stones, each roughly 13 feet (4.0 m) in height and seven feet (2.1 m) wide.  The weight of each stone is estimated to be 25 tons. This Neolithic and Bronze Age wonder is thought to be an early burial ground.

Stonehenge was included on UNESCO’s list of World Heritage Sites in 1986. As one of the world’s most recognizable locations, it is estimated that this site garners more than 800,000 tourists annually.

All Location Photos courtesy of Pixabay