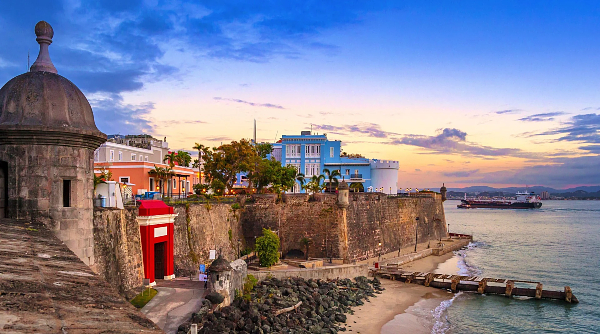 Top 10 Things to do in Puerto Rico — with video

Puerto Rico is a territory of the United States and is known to many as one of the best vacation spots in the Caribbean. This gorgeous destination is often referred to as an island; however, it is actually an archipelago formed by the main island plus 143 small islands, islets, and cays, including Vieques, Culebra, Culebrita, Palomino, Mona, and Monito. It is perfect for the vacationer looking to soak up the sun and for the adventurer who wants to make some fantastic memories. With some of the world’s oldest and most well-preserved architecture, Puerto Rico should be on every traveler’s bucket list. With so many unique experiences to be had, here are the top 10 things to do, in no particular order.

⦿ To watch our video version of this article, visit our YouTube channel HERE and use the highest quality playback settings. Or keep reading for valuable information and links. 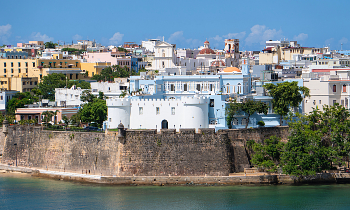 Do not miss exploring Old San Juan.  History buffs, in particular, should not skip this vibrant place. This is where visitors will find The San Juan National Historic Site, with buildings dating from the 16th century, including the San Felipe del Morro and San Cristóbal fortresses, along with the old city walls.  And the Bautista Cathedral houses the tomb of Spanish explorer Juan Ponce de León.

The brightly colored colonial houses that line the cobblestone streets and the abundance of churches, cathedrals, and historical forts allow visitors to experience over 500 years of history. 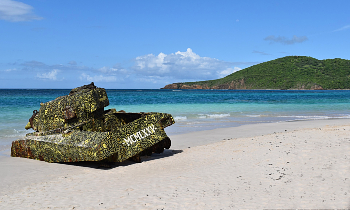 Playa Flamenco is a beautiful beach in Puerto Rico, sheltered in a horseshoe-shaped bay. This beach is a Caribbean jewel, so much so that it is recognized as one of the most beautiful beaches in the world. Because of this, it is also a very popular tourist attraction.

Famous for its white sand and shallow turquoise waters that are practically wave-less, the beach also features convenient amenities like bathrooms, food kiosks, tourist stations, and places to rent water sports equipment. It is also a great place to snorkel and dive.  However, Flamenco’s most iconic attraction is undoubtedly The Tank, which is a reminder of the US Navy’s occupancy of Culebra.

Take in the Glowing Lights of Mosquito Bay 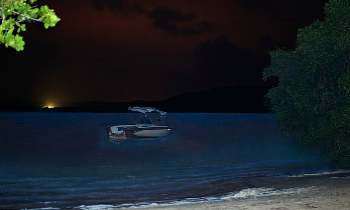 Mosquito Bay sounds much less appealing than it is. In reality, it is one of the world’s most beautiful sights to see. Guides say it was not named after the bloodsucking insect but after a pirate ship called El Mosquito.

This bay mesmerizes visitors with its bioluminescence, which glows blue when agitated. Although two other bays in Puerto Rico have bioluminescent organisms causing the waters to light up, Mosquito Bay is the brightest. Make sure to visit at night when the moon reflects off the glimmering blue waves. 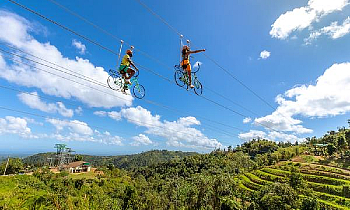 There’s nothing like outdoor adventures while on vacation; they’re a good way to get your blood pumping. If you’re looking for a shot of adrenaline while visiting Puerto Rico, consider careening across the sky at speeds up to 60 miles per hour. The Beast zipline in Toro Verde Adventure Park will allow you to do just that. As a matter of fact, there are several different ziplines to discover, including the option for Toro Bikes, as shown in the photo.

Visitors will also find Climbing Towers on the premises plus two restaurants. Toro Verde Adventure Park is the perfect destination for thrill seekers and is a great place to spend a few hours. 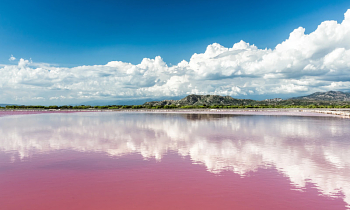 Located on the southwestern side of the island in Cabo Rojo, visitors will find Las Salinas, which is casually called “Pink Beach”.  It is positively picturesque, but unlike the world’s 17 pink beaches – as seen in the Bahamas, Bermuda, Spain, and French Polynesia, to name a few – the pink hue here is in the water, not on the sand.  This region is known as the Salt Flats and the color is a naturally occurring phenomenon that ranges from bright pink to dusty rose depending on environmental factors.  In this regard, it is very much like Los Colorados in Yucatan, Mexico. And just like in Mexico, the water is not for swimming.  It is only for admiring and taking photos.

For visitors that wish to swim, luckily Las Salinas is close to Playa Sucia, one of the most popular beaches in Cabo Rojo. 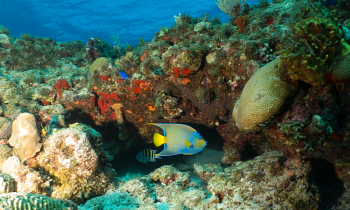 **It should be noted that this is a scuba-only area, and stepping onto the island is dangerous and punishable by law as the island is full of live ammunition from the United States Armed Forces. To go on a diving trip to this fantastic underwater haven, Taino Divers offers tours. 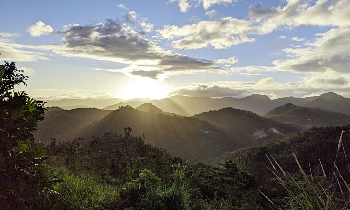 El Yunque is special because it is the only tropical rainforest in the United States.  With an area of nearly 29,000 acres, it is one of the smallest in size, but one of the most biologically diverse.  The options for activities are endless in this giant forest, but hiking is the most common.  Starting at the El Portal Visitor Center, a walkway meanders through the surrounding treetops and trails extend to La Mina waterfall, Mount Britton, and the high-altitude dwarf forest. In the south, visitors will see ancient petroglyphs, made by the area’s indigenous Taíno people.

Other activities include swimming in the lagoons, biking around the many trails, taking pictures of the wildlife, and much more. 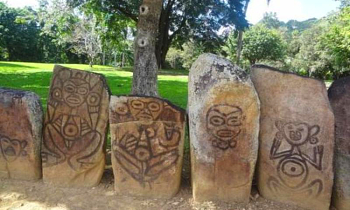 A unique place to visit in Puerto Rico is the Caguana Indigenous Ceremonial Center. This archeological site is meant to teach and remind tourists about the rich history of the land before the Spanish colonization. Utuado, where the center is located, is considered to be one of the most important Pre-Columbian sites in the West Indies and contains a well-preserved ceremonial ball court.

The Caguana site has been protected since 1955. It provides insight into how the Taíno people nurtured the land, played games, and carved stones decorated with monoliths and petroglyphs. 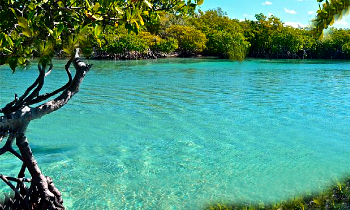 Officially named Cayo Aurora, Gilligan’s Island is a real-life slice of paradise. It is part of the Biosphere Reserve of Guanica. This island can be reached by kayaking, taking the ferry, or taking a water taxi. Once on the island, it is fully explorable by foot.

Small but mighty, Gilligan’s Island is surrounded by mangroves and offers beautifully clear and calm aqua waters where colorful fish are easy to spot.  This is an excellent spot for snorkeling or birdwatching. The island also offers picnic tables and BBQ pits.

Live It Up at Distrito T-Mobile 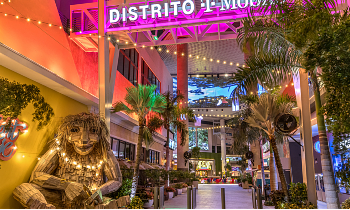 The five-acre entertainment venue of Distrito T-Mobile opened in 2021 and has since become a favorite destination for visitors and locals. Located at the heart of the Convention Center District in San Juan and festooned with neon lights and tropical plants, this is a lively place to be day and night.  The complex contains 10 restaurants and bars that range from high-end Puerto Rican cuisine at La Central by Mario Pagán to Spanish tapas at Barullo Taberna Española to bar bites and beers at Arena Medalla.  Local artists showcase their work here, and a large seating area can be found in a central green space that also contains giant screens. Visitors can also enjoy a movie at Caribbean Cinemas VIP, which features the first ScreenX Theater in the Caribbean or enjoy a concert at Coca-Cola Music Hall.

Favorite 5 Reasons to Opt for a Vacation...