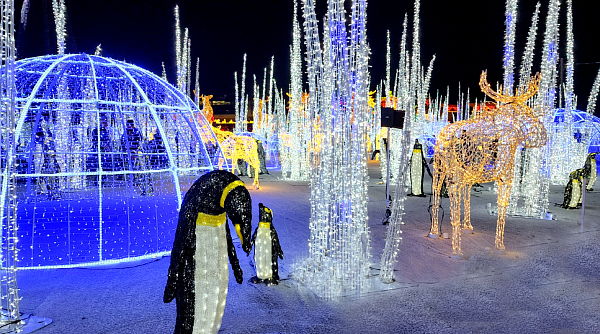 Wander the World at illumi Mississauga — with video

Light Shows are nothing new, mainly holiday shows long held in touristy regions.  As just one example, Niagara Falls, Canada has hosted the popular Festival of Lights since 1982 and it has continued to grow over time – this year with over 3 million lights and 75 displays. Watch our tour video HERE  Due to the overwhelming popularity of these types of displays, it didn’t take long before light shows emerged in cities big and small, with a mix of walkable and driveable routes.  Between 2020-2022, COVID restrictions due to the pandemic assisted in ramping up “drive-thru” light shows, thereby allowing guests to maintain their distance by remaining in the safety of their vehicles.  And soon, additional holiday presentations were added.  In 2022 Niagara Falls created a driveable light show for Valentine’s Day, and many Halloween-inspired presentations sprung up across North America, such as Toronto’s Halloween Spooktacular.  Watch our tour video HERE. 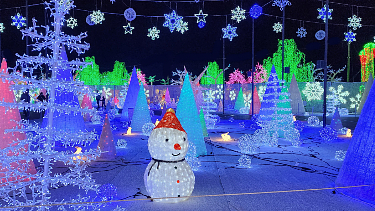 Yet, despite how creative and entertaining these displays are, they pale in comparison to illumi by Cavalia – a company that specializes in the creation, production, and marketing of live shows and large-scale events.  Cavalia has taken the light show concept to the next level… or quite possibly ten levels after that.  Currently, there are two installations – illumi Laval located in the province of Quebec, and illumi Mississauga in the Greater Toronto area, both of which opened in mid-September and run until January 8, 2023.

illumi Mississauga is truly breathtaking with 14 distinct sections (called universes) spread across 600,000 square feet – the equivalent of 10 football fields.  Halloween decor has recently been replaced with Christmas displays, with the Tree of Lights as the crown jewel standing at 154 feet (47 meters) tall – as tall as the Statue of Liberty. But holiday-inspired exhibits, such as the Land of Frost, are just the tip of the iceberg.  There’s so much more than that to experience.  The pathway routes guests through the twinkling Tunnel of Love, as well as a Jurassic Encounter that includes animatronic dinosaurs.  This is followed by the Hollywood-themed Crazy Boulevard and the Happiest Farm where visitors will find a barnyard of lighted animals amidst gorgeous autumn trees. 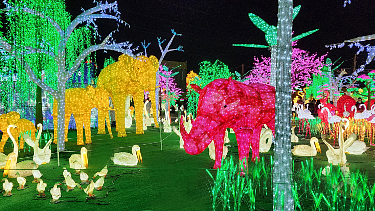 After that, illumi encourages guests to wander the world with a succession of universes designed to represent different parts of the globe.  Europea Place features a carousel and a backdrop of lighted buildings that resemble old-style European homes, with a touch of France seen in the old-fashioned lamp posts that line the street.

The universe of The Colourful Animal Kingdom starts out with Africa’s Serengeti region, represented by animals such as elephants, zebras, hippos, giraffes, and flamingos. But partway through, the exhibit ventures into India with tigers, regional breeds of cattle, and an abundance of coiled cobra snakes.

Visitors take a brief pause from globetrotting as the Animal Kingdom transitions to Kid’s Paradise featuring a swath of color and bright lights in the shapes of cakes and candy.  This is followed by a shock of 250 red tarantulas in the universe known as Scarlet Spiders.  This isn’t the place to be if you suffer from arachnophobia.  The display is well done, but from our standpoint, it’s a shame this extra large space wasn’t used for a more diverse display because the repetition of so very many spiders in such a large area seems to be a bit of overkill.  Perhaps a beachy scene representing a mix of the American South and the Caribbean Islands would have been more interesting with a mix of palm trees, thatched huts, dolphins, parrots, and related items.  Such a display would have felt more diverse and would have nicely offset the cold atmosphere inspired by The Land of Frost and Infinite Poles. 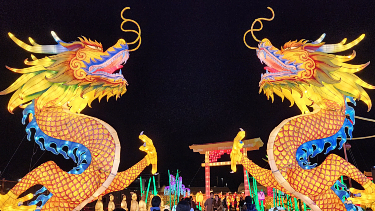 Travel lovers will once again embrace their wanderlust with a walk through Infinite Poles, where the North and South Poles are both depicted with igloos and icicles, polar bears, penguins, and whales (as seen in the lead photo).

Then it’s time to visit Asia with a stroll through The Magic Lanterns.  A mix of China and Japan is seen in panda bears, bamboo, and Chinese warriors alongside ancient Japanese temples, massive oriental dragons, and geisha girls.

This enormous display of magical lights finishes with the Cavalia Horses in a sprawling sea of gold light that features 200 stallions in an array of poses, plus a stunningly beautiful hologram of a horse reflected on a backdrop of fountain water. 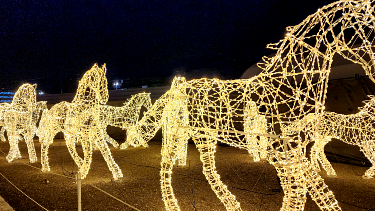 Guests will also find benches for relaxing throughout the park-like setting, along with food trucks and a few snack stands, including drink options for hot chocolate and bubble tea.

There’s no doubt you’ll end your visit with a feeling of wonderment and the knowledge that it’s the best light show you’ve ever seen.

⦿ To watch our video tour of illumi, visit our YouTube channel HERE, and use the highest-quality playback settings.

Photos belong to Go GlobeHopper.
Please do not Copy or Share without Credit and LinkBack.  Thank You.