The I-15 drive from Los Angeles to Las Vegas can be somewhat monotonous considering it is 4 solid hours of red rock, jagged mountain, cactus, and tumbleweed.  No doubt, it’s beautiful and fascinating, particularly if you’re seeing it for the first time, but after a while, it all looks the same.  If you’re looking for a unique change of pace, be sure to stop and explore Calico Ghost Town in Yermo, California.

Many people that drive the route do so for business purposes so they’re not overly concerned about being entertained, nor are they disappointed there are very few towns along the way.  However, tourists making the trek might be very interested to know there’s an opportunity to return to the Wild West.

Approximately 3 miles from the town of Barstow, travelers will see CALICO written in huge white lettering on a mountain peak. Below sits Calico Ghost Town, the community that was established in 1881 during California’s largest silver strike.  The town quickly populated as miners and their families flocked to the region’s 500 mines, which produced $20 million in silver ore during a 12-year run.  However, when the value of silver eventually crashed, the people of Calico moved on and left behind a ghost town. 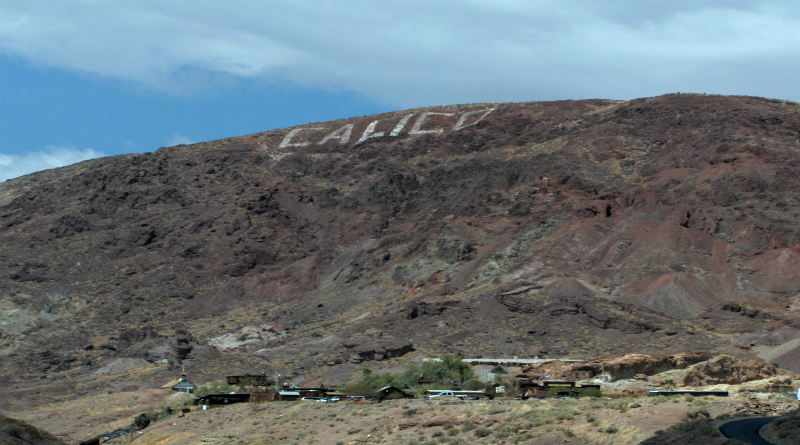 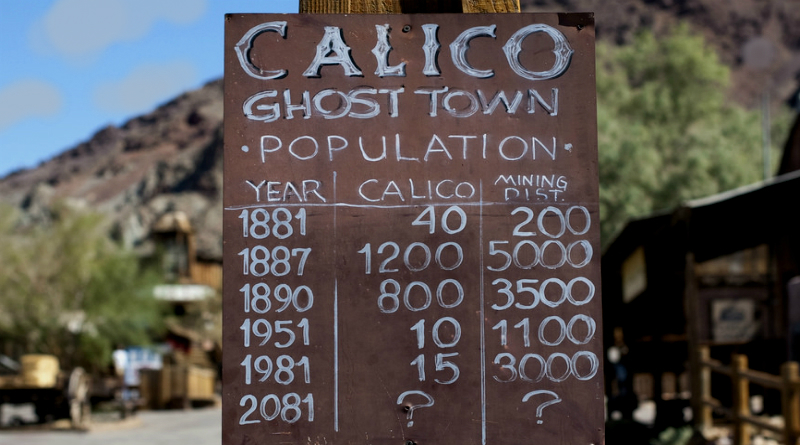 A sign posted in the town features the wax and wane of the population starting in the year 1881 with a mere 40 people and then rapidly increasing to 1200 residents by 1887.  Three years later the decline was apparent with a count of 800 citizens, and by the early 1900s, the town was barren.

Calico remained abandoned and deteriorating until the 1950’s when Walter Knott, the founder of California’s amusement park Knott’s Berry Farm, decided to restore all but 5 of the buildings.  Eventually, the site became a State Historical Landmark, as part of the San Bernardino Parks System, and is open every day of the year with the exception of Christmas.

Built on the side of the mountain, the main street incline is as steep as the history, with buildings including the town hall, hotel, general store, fire hall, and saloon, complete with swinging half doors that look like they’re straight out of a western movie.  The old jail is built into the mountainside for maximum security, though it’s doubtful it would effectively contain anyone these days.  And to add to the authenticity of Calico, there are mining carts still on the tracks, a burned-out stagecoach wagon, and ruins that once belonged to the town’s Chinese residents.  It’s no wonder this historic site has inspired songs and stories and has been used as the backdrop to movies and music videos. 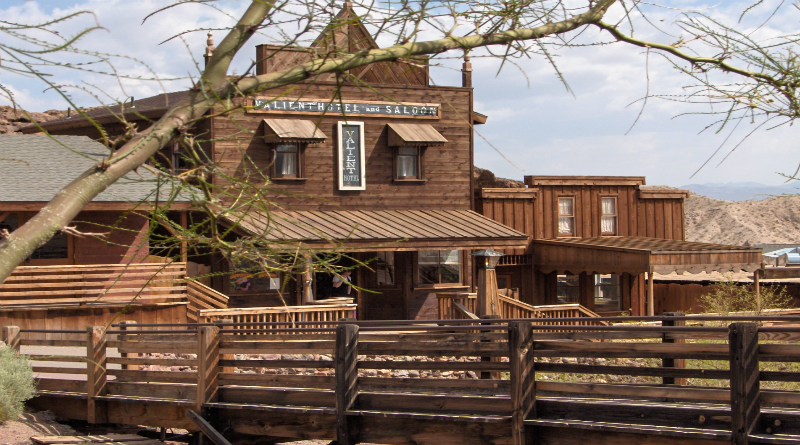 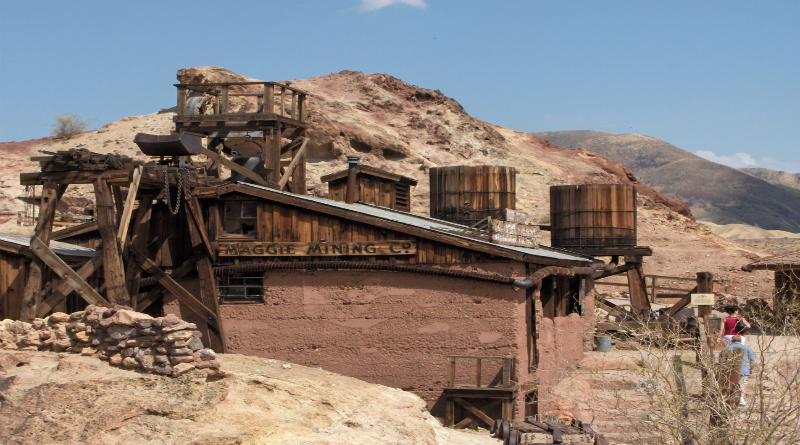 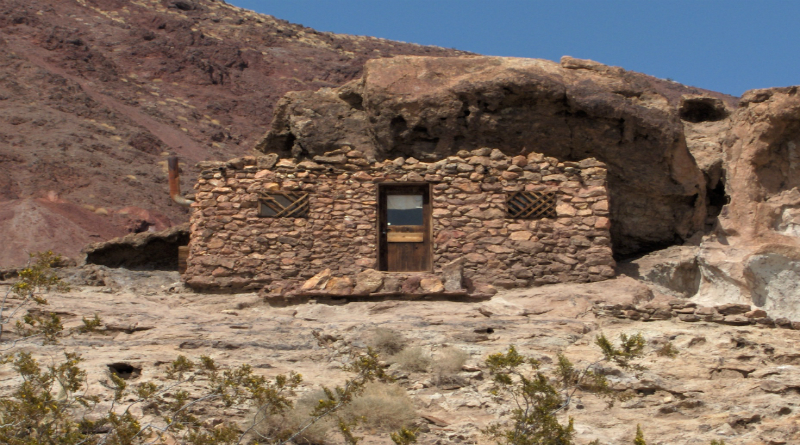 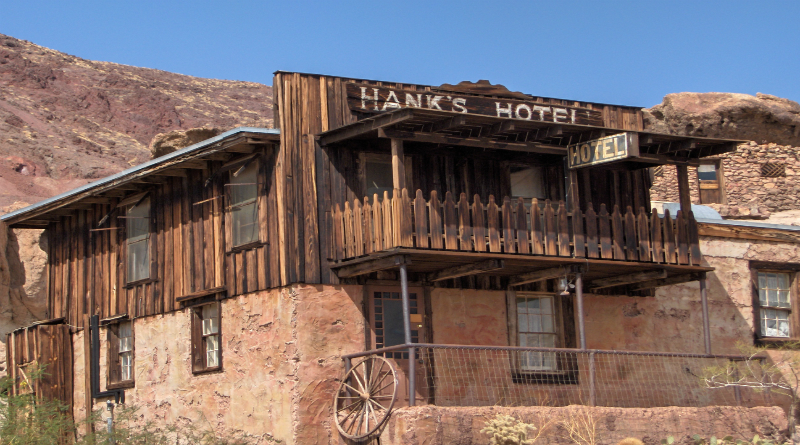 A lookout area offers spectacular views of Calico and the desert, but signs and fencing prevent tourists from exploring outside the perimeters of the town due to safety issues connected with the abandoned mines.

There was a time when Calico felt genuine, with only the abandoned buildings to stroll through and a small Panning for Gold experience to give tourists an idea of what it was like for the miners, though it was actually Fools Gold (iron pyrite) that was purposely planted for the purpose of being ‘discovered’.

Since that time, 3 restaurants have been added to the premises along with 14 unique shops.  And the expansion and commercialization have continued with gunfight shows, tours of the mine, and a short ride on the Calico & Odessa Railroad.  Now that Calico is essentially a park, the town offers overnight camping, a spring festival, and a Ghost Town Haunt in October.

However, some tourists claim that Halloween isn’t the only time the town is haunted. Legend has it that a few ghosts reside in Calico all year round and their presence can be felt in certain buildings.  But we’re not surprised that deceased town folk may have decided to stick around given the appearance of the cemetery – with nothing but a few wood grave markers sticking out of piles of rubble, it hardly looks like a place to rest in peace.  And with so many vultures flying overhead (3 of which can be seen in the dead tree branches by the stagecoach below), Calico definitely feels a bit eerie. 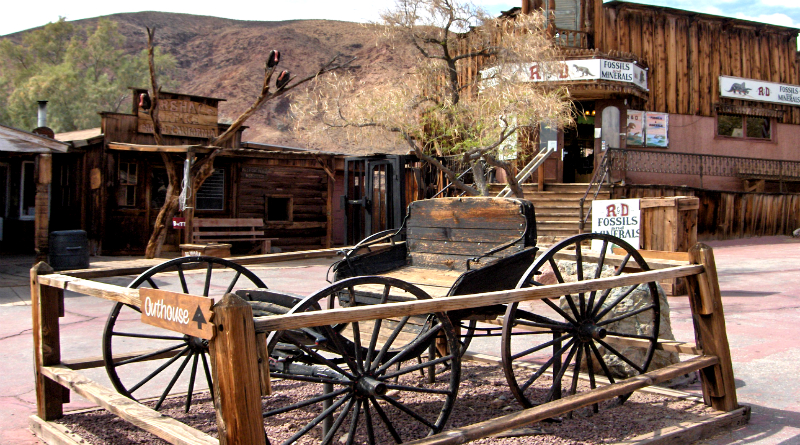 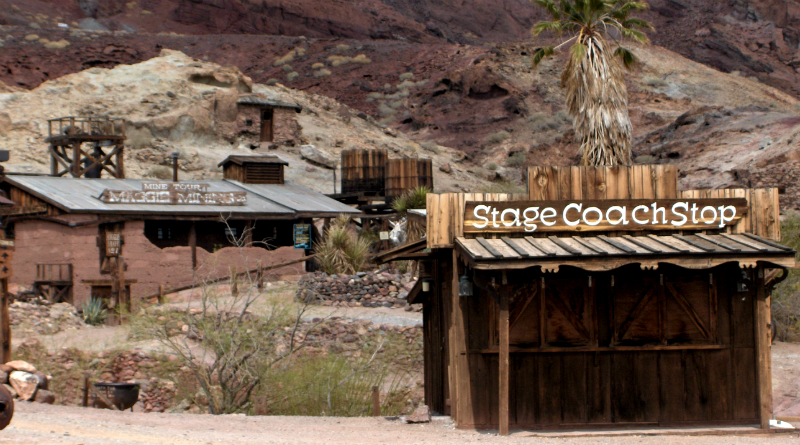 The $8 price of admission does not cover the newly added attractions, which include a ride on the railroad, panning for gold, and a tour of the mine.  Luckily, however, none of them are over $4 each, and the park offers a 3-attraction bundle at $7 in order to save some money.  Likely, it would be easier for the park to charge an all-inclusive price of $15 right off the bat.

Our personal feeling is that Calico felt more authentic without the addition of shows, events, shops, and restaurants.  However, given that there is little else in the area, it’s easy to understand how growth was inevitable. It is, after all, a tourist attraction.

At the end of the day, Calico is an up-close and personal look at the Old West and will open your eyes to the hardships faced by the miners and their families, such as the heat and dust of the desert, the dangerous indigenous wildlife, as well as the lack of water. Buildings like the jail and saloon will bring many a western movie to mind and you’ll come away with a multitude of interesting photos, as well as a vivid image of life during the silver strike.

So if you happen to be cruising I-15 and see Calico written on the mountain peak, stop in for a while to see what it’s all about.  Your ‘prospects’ look good for a memorable time.

Photos belong to Go GlobeHopper.  Please do not copy or share without credit and link back.  Thank you.

Review of the Sheraton Gateway Hotel, Toronto – with video