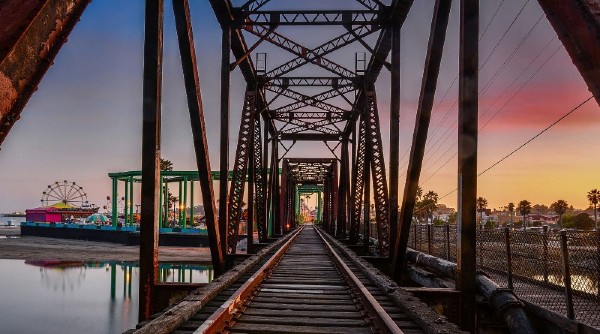 If you are a fan of cult movies and visiting the real-world locations that inspired the stories, consider The Lost Boys Tour in Santa Cruz.

The movie in question was a popular 1980s vampire flick that gained a cult following. It has been three-plus decades since Hollywood introduced audiences to this horror classic that cast Jason Patric and Corey Haim as a pair of brothers who encounter a gang of young vampires stalking the fictional California town of Santa Carla.

Filmed almost entirely around Santa Cruz County, The Lost Boys starred Patric, Haim, and Kiefer Sutherland, years before they became household names.  And the storyline unfolded around the beaches, boardwalks, and bridges of Santa Cruz. Many of the locations where the movie was shot live on, and offer a unique opportunity to see the world of The Lost Boys firsthand—without the risk of running into any vampires.

Relive The Lost Boys movie by visiting some of the Santa Cruz locations featured in the film —all marked and made easy with this downloadable location map produced by the Santa Cruz County Film Commission.

Extending along the coast of Monterey Bay, this famous oceanfront walkway is home to amusement park rides, shops, and music venues—and it also provided the backdrop for countless scenes in The Lost Boys. The historic Looff Carousel is featured prominently in one of the film’s earliest scenes, when Sutherland’s character and his vampire gang are introduced, while the massive Giant Dipper roller coaster looms large in the background of many nighttime scenes.

Haim’s character meets the eccentric Frog Brothers, played by Corey Feldman and Jamison Newlander, at this shop, which is actually located in downtown Santa Cruz—not on the boardwalk, as it appears to be in the film. A fixture in Santa Cruz for more than 40 years, Atlantis Fantasyworld relocated after the Loma Prieta earthquake of 1989 destroyed the original shop, but shop owner Joe Ferrara—who appeared as an extra in The Lost Boys—still runs the store at its Cedar Street location.

The longest pier on the West Coast, this half-mile wharf in Monterey Bay is featured in the film as the location of Max’s Video Store. The shop that doubled as the video store is currently the home of the Santa Cruz Bay Company gift shop, but the building’s distinctive shape and entrance will likely be familiar to eagle-eyed Lost Boys fans.

Exterior shots of the rustic house where Patric and Haim’s characters live with their mother and grandfather actually feature the clubhouse for the Pogonip Country Club. The unique property, located high in the hills above Santa Cruz, was the home of a social club, golf course, and polo club at various points over the years. Although the structure has been unoccupied for decades, it remains a popular landmark for hikers (but hopefully not vampires).

One of the most memorable scenes in the movie was actually filmed outside of Santa Cruz—in Santa Clarita, five hours south. The Iron Horse Trailhead trestle bridge that the vampire gang hangs from in the film is located off Interstate 5 on the Magic Mountain Parkway, about 40 miles north of Los Angeles. The bridge now features a pedestrian walkway, for anyone who would prefer to cross over it instead of hanging underneath.

This ultra-mellow beach town along Highway One has a decided split personality—and both sides are cool. First, there’s the family fun of the Santa Cruz Beach Boardwalk, a yesteryear-style esplanade lined with classic coasters, arcade games, corn dogs, and a historic carousel. Then there’s downtown Santa Cruz, where local college students browse for vintage and boho chic, and relaxed restaurants focus on organic, local ingredients.

If you love nature, this small city makes an excellent launching pad. Take a boat tour out from the wharf for excellent whale-watching—grays, blues, or humpbacks, depending on the time of year— or head inland just a bit to see the ancient trees at Big Basin Redwoods State Park, located in the Santa Cruz Mountains. And there’s one other nature-inspired gem tucked in these mountains: a generous selection of wineries, most specializing in Pinot Noir, Chardonnay, and Cabernet Sauvignon.

But at its heart, Santa Cruz is a surf town. This is where the sport was originally introduced in the U.S., and top surfers know that the place to be is Steamer Lane. Need more proof? Nearby lives Jack O’Neill legendary surfer and force behind the O’Neill empire, pioneer of the wetsuit and elder statesman of everything surf in the Golden State.

What to Expect at Conrad Punta de Mita – Nayarit, Mexico