Toronto is Canada’s largest and most recognizable city. The CN Tower, the Rogers Centre, and the numerous buildings that make up the skyline make it identifiable to travelers around the world — 13.6 million tourists annually to be exact.

Due to Toronto’s multiculturalism, there are culinary experiences, hotels, and attractions to suit almost everyone. It is a city that can be visited in any season, and as a vacation destination or as a weekend getaway.  For Toronto travel info and reviews, click HERE.  For our Favourite 5 attractions, read on! 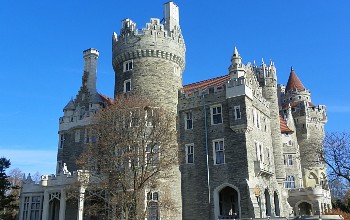 Believe it or not, the only full-sized castle in North America is actually located in Toronto. Casa Loma features everything you could imagine in a castle. There are turrets offering beautiful views of the city. There’s a large library and nearly 100 rooms to explore. There are secret passageways to discover, including a 245-meter tunnel to the stables and carriage house, the latter of which features an exhibit of vintage cars from the early 1900s.  Plus, it has five acres of gardens full of beautiful flowers, sculptures, and fountains. Plug the headphones in and listen to the digital audio guide as you stroll around the ornate castle and vast grounds. 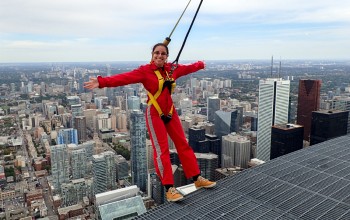 One of Canada’s greatest landmarks and one of the seven wonders of the modern world, the CN Tower has come to define the Toronto skyline. At 553 meters in height, this engineering wonder is hard to miss during any trip through the city and you don’t want to miss it. Beyond being a very cool building you can take an elevator up to the revolving 360 Restaurant for world-class dining. Feeling a bit bold? Walk across the glass floor, only 2.5 inches thick, 113 storeys above the ground. Want an even bigger thrill? Travel up another 33 storeys to the Skypod lookout. Still not daring enough? Strap on a harness, head outside, and take a thrilling walk along the building’s edge with nothing but air between you and the ground, in the not-for-the-faint-of-heart EdgeWalk experience. This adrenaline-inducing activity is actually the world’s highest ‘hands-free walk,’ so you can brag about that one to your friends. 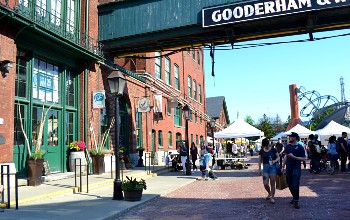 Restaurants, boutiques, arts, and entertainment are The Distillery Historic District’s claim to fame. This pedestrian-only village features more than 40 heritage buildings that now house everything a modern traveler might enjoy. New fashion can be found in restored, Victorian-era buildings; culinary inventions are hidden behind weathered red brick walls; and art galleries and performance venues host events year-round, ensuring that the old neighborhood is full of life.

The sector gets its name from the Gooderham & Worts whiskey distillery, which used to occupy many of the buildings. 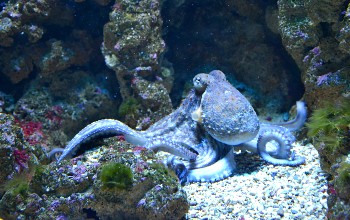 Do you like the idea of coming face to face with a shark, separated only by a pane of glass? The Ripley’s Aquarium of Canada allows you to live that experience while exposing you to another 16,000 marine animals hosted on-site. It takes 5.7 million liters of water to host all of those animals, from southern stingrays to 65-year-old giant lobsters, to giant pacific octopus, to nettle jellyfish. Explore life on the reef, take a safe stroll under a dangerous lagoon, stick your head in an underwater viewing bubble, or take in a stingray dive show. Open 365 days a year, you can always turn to the Ripley’s Aquarium of Canada for an exciting day—whether it’s an angelfish on Christmas Day or a stingray on your birthday. 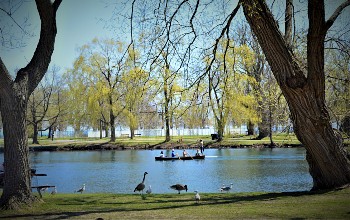 You only need to travel 10 minutes from the city of Toronto to enter a completely different world. Hop on a ferry and embark on a journey to the Toronto Islands, an attraction-filled destination where relaxation is the name of the game. There are no cars, so you’re going to want to rent a bike or rollerblades to explore the chain of islands — the three big ones being Centre, Ward’s, and Algonquin — which are connected by a series of pathways and bridges. Along the water, you’ll find four beautiful beaches, while summer cottages from the 1920s and impressive English gardens are some of the main draws on land. A maze located on the islands serves to test your wits, while the haunted lighthouse tests your courage. From picnics to paddleboats, to ponies, the Toronto Islands offer a great contrast to the busy city while still enjoying the view of the skyline!

Top 10 Attractions in Orlando — with video