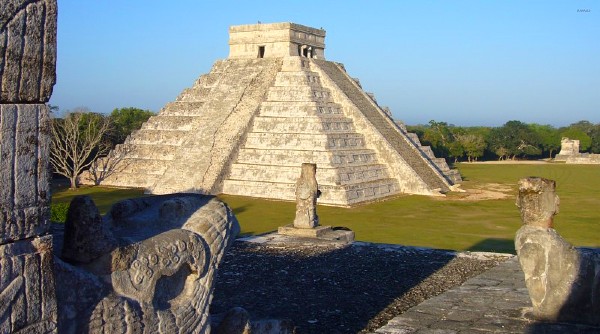 When it comes to vacationing in the Yucatan Peninsula of Mexico – a region that covers the resort-laden beaches of Cancun, the tropical jungle area of Riviera Maya, and the seaside town of Tulum – no stay is complete without a visit to one or more of the four must-see Mayan Ruins.

Fortunately, there are several locations peppered throughout the region that contain such ruins for tourists to explore and admire.  But the 4 most prominent locales include Tulum, located 2 hours south of Cancun and set against a beautiful backdrop of the Caribbean Sea; and Coba, the jungle setting where visitors are still able to climb the main pyramid.  There is also Chichen Itza; which is the most popular location with graphic stone carvings and the El Castillo pyramid (now considered one of the ‘new’ Wonders of the World); and Ek’ Balam, which is one of the newer sites to be discovered, located approximately 35 miles from Chichen Itza.

⦿ To watch our exploration of 4 must-see Mayan ruins, visit our YouTube video HERE and be sure to use the highest quality playback settings. Or, keep reading for valuable information and photos. 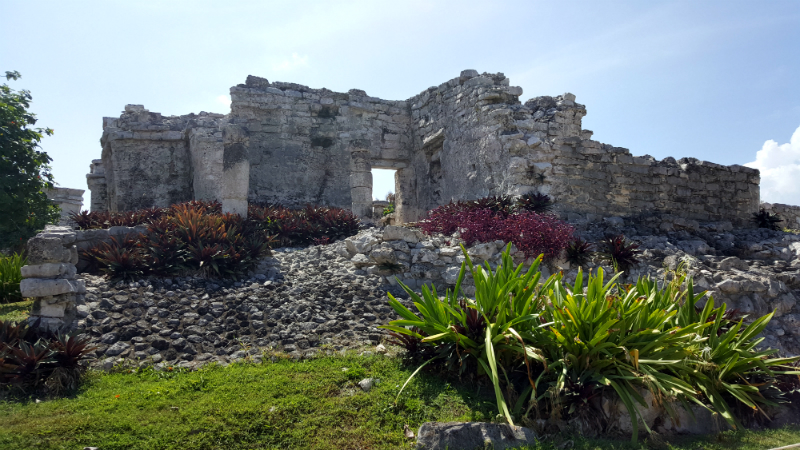 It is crucial to note the designated parking area is a full kilometer from the entrance to the ruins so visitors are facing a sizeable walk before their tour begins.  The alternative is to hop on a tractor-pulled wagon which will deposit you closer to the entrance for a small fee.

It is also imperative that you prepare for the extreme heat and humidity of the area. The majority of the ruins are in a wide-open field-like space, with few trees and very little shade so be sure to use sunscreen, consider a hat or sun umbrella, and ensure that you take a bottle of water to help you stay hydrated.

The Tulum Ruins – Tulum meaning ‘wall’ – tell the story of the once-thriving Mayan village that existed between the 13th and 15th centuries. Protected by 12-15 meter cliffs on the east side, the remainder of the compound is fortified by a rock wall, through which a small and shallow opening allows passage to visitors. Pyramid El Castillo is among the most preserved of the ruins, though none are available for climbing or hands-on exploration.  Undoubtedly, the most outstanding photo opportunity of Tulum is the turquoise waters of the Caribbean Sea that exist just beyond the Templo Dios del Viento (God of Winds Temple) which guards Tulum’s sea entrance.  Not far below, the sugary sand of a paradise-like beach beckons tourists to cool off in the water.  So take your bathing suit and a towel.

Expect to see vultures circling, a few coati-mundi seeking what little shade there is, and plenty of large iguanas basking in the sun.

At the entrance and ticket area of this national park, tourists will find a charming craft and souvenir marketplace, along with a few restaurants and food stands.  Additionally, native Mayan and Aztec people in full costume make themselves available for photo opportunities and interesting performances. 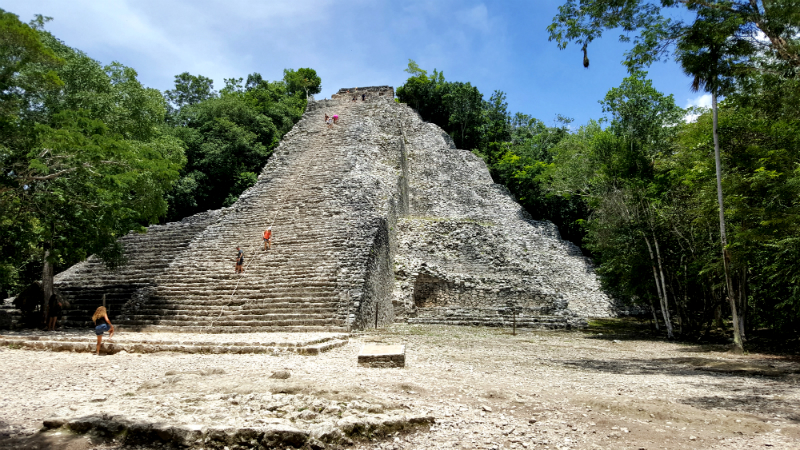 Set in the lush jungle and calculated to have had more than 50,000 inhabitants during its peak of civilization, Cobá was one of the Yucatan Peninsula’s most commanding cities.  Unlike Tulum, the ruins are not grouped together.  Instead, the structures are widespread with connecting roadways, almost like urban areas of today’s world.  Among these are a church, an altar, a ball court, and several monuments.  Located furthest back from the entrance is the most popular of structures –  the 137-feet high Nohoch Mul Pyramid, which can be climbed for impressive aerial views of the jungle and the Coba metropolis.

Thankfully, due to the treetop canopy that covers most of Coba, exploring these ruins is a cooler experience than hiking through Tulum.  However, it is still quite humid and the 2+ kilometer walk to get through the archeological site can be daunting.  To combat this, the park provides rental bikes to peddle your way around, or you can rent a ‘Mayan Taxi‘ which is a bike designed with a double bench seat on the front so tourists can enjoy the stunning views (and the breeze) while a muscled Mayan does the peddling.

Expect to see vultures and a variety of tropical birds, iguanas, capybara, and coati. Spider monkeys and Howler monkeys are also common in jungle areas.  Though we didn’t manage to capture a photo, we did see two tarantula spiders. Outside the gates, tourists can find souvenirs and food stands. 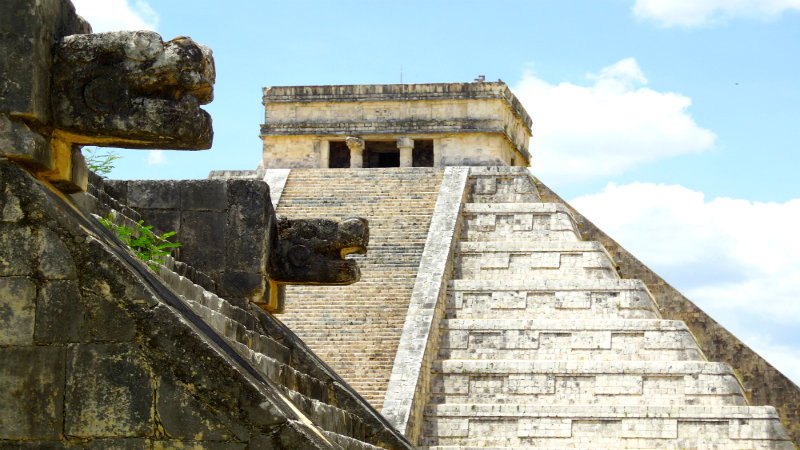 Chichen Itza El Castillo and Head of the Snake

Undoubtedly, Chichen Itza is the most visited of all the Yucatan Peninsula ruins, with approximately 200,000 visitors per year.  This is mainly because it is located closest to the heavily favored tourist destination of Cancun.  As such, you can expect this destination to be quite crowded, with the Tulum ruins as the second most popular site.

Dating back to 600 AD, Chichen Itza mixes several architectural styles all within the same property, which likely can be attributed to the most diverse Maya population that once lived here. The most striking difference can be seen in El Castillo (the name of every site’s main pyramid/temple), as it appears far more structured and preserved than that of the Nohoch Mul Pyramid at Coba. Unlike Coba, it cannot be climbed.

The name means ‘At the mouth of the well of the Itza‘, referring to four onsite cenotes which are circular sinkholes formed by the collapse of underground limestone caves and provide an abundance of freshwater. 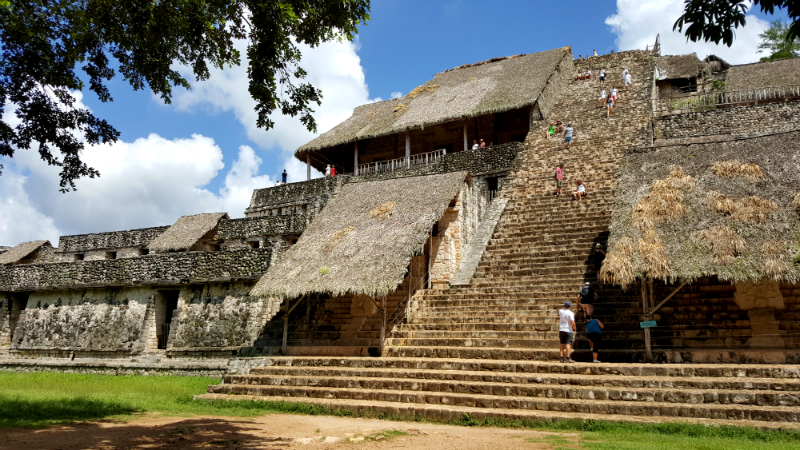 Ek’ Balam (meaning the Black Jaguar) is located approximately an hour from Chichen Itza and is one of the latest ruins to be discovered – only 35 years ago.

Due to the protection of its jungle setting and given that the site is lightly visited, these Mayan ruins are one of the most well-preserved, featuring many different structures, detailed sculptures, temples, and a recreational ball court.

Ek’ Balam boasts a majestic main temple that spans more than 500 feet long, as well as an elaborate and stunning ‘monster mouth’ which was believed to be a gateway to another world.  Visitors are able to look into the interior of the temple where more remarkable ruins can be seen and a King is believed to be buried.

This site also includes an onsite cenote for swimming, a small craft market, and native Mayans in full costume that make themselves available for photo opportunities.  The spiritual site of Ek’Balam is well worth the long drive as it is a ruins site like no other

Again, iguanas are plentiful here, along with a variety of birds and monkeys.  And though they do not make themselves visible during the day, ocelots and, of course, black jaguars are known to inhabit the area.

For virtually ALL of these Mayan Ruins, we recommend a GOOD pair of walking shoes, cool clothing, sunscreen, and a hat, and bottled water or a replenishing drink like Gatorade or Power Ade. Don’t forget your camera, and perhaps a bathing suit and towel if you want to take advantage of the beach at Tulum or swimming in any of the ruins’ nearby cenotes.