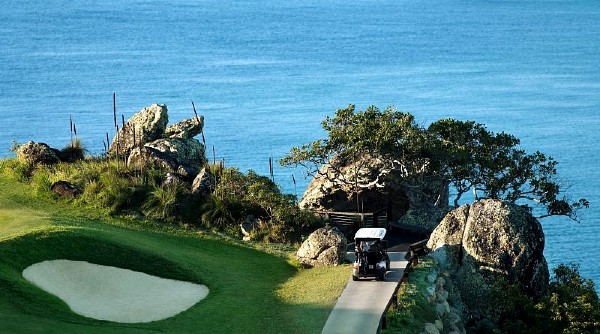 From the traditional links golf courses of Tasmania to the championship Sandbelt region in Melbourne, Australia has some of the best courses in the world.  There are also plenty of hidden gems that are all worth exploring. So if you’re questioning where to find a great golf destination, Australia is the answer.

From the city to the seaside, the tropics to the temperate, these courses will challenge your golf skills and the landscapes will take your breath away. Play the famous Melbourne Sandbelt or test your game on the links courses that wind through the wild and dramatic dunes of northeast Tasmania. Tee up alongside the sandstone sea-cliffs of southern Sydney or on a tropical island in the Great Barrier Reef. With great golf, great weather, and amazing food and wine, the Great Golf Courses of Australia should be at the top of any serious golfer’s bucket list.

The following is a list of the best courses found in Tasmania, New South Wales, South Australia, and Queensland, in that order.  To view courses specific to Victoria/Melbourne, click HERE. 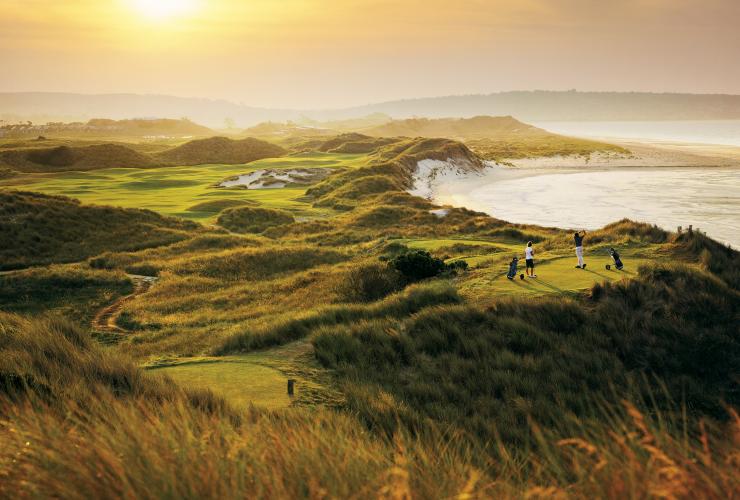 Located along the wild and remote coast of Northeast Tasmania, The Dunes Course at Barnbougle Golf Resort has gained a reputation as one of the world’s most impressive links courses since its opening in 2004. Designed by US golf architect Tom Doak and former Australian pro golfer Michael Clayton, the course is a spectacular amalgamation of Mother Nature and human craftsmanship. The quirky par-three seventh hole, nicknamed “Tom’s little devil”, demands a precise shot from a slightly elevated tee onto a tiny upturned green which can be difficult in windy conditions. The fourth hole boasts the largest bunker in the entire Southern Hemisphere. Stay in classic beach-front cottages and four-bedroom villas and dine at the clubhouse with its superb views. 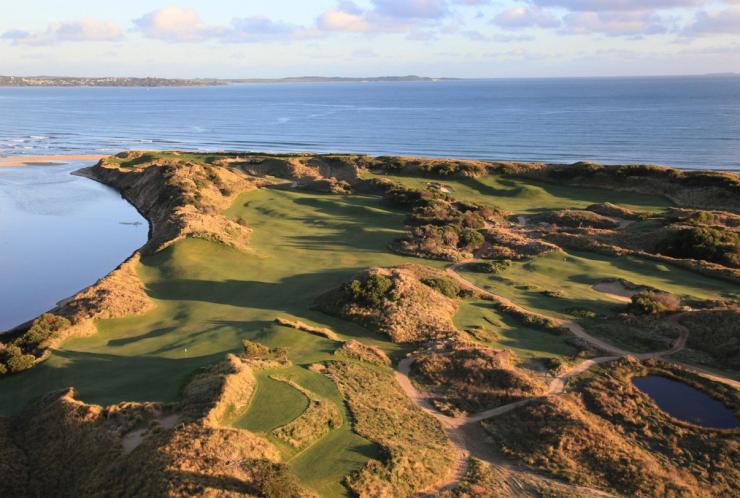 Barnbougle Lost Farm is one of Australia’s most visually spectacular golfing experiences. Established in 2010 to complement the fairways of The Dunes, Lost Farm boasts some distinct similarities and yet is noticeably different to its sister course. On the steep, dramatic sand dunes of the Tasmania coast, golf architect Bill Coore created a non-traditional 20-hole course, with greens dispersed among the dunes and along the coastline. Teeing off from coastal heathland and playing inland beside the Forester River, the fifth hole is a particular highlight, with the possibility of a birdie or eagle within sight. Lost Farm Lodge offers stylish accommodation overlooking the golf course or the ocean and the restaurant sources the finest Tasmanian produce and wines for memorable meals. 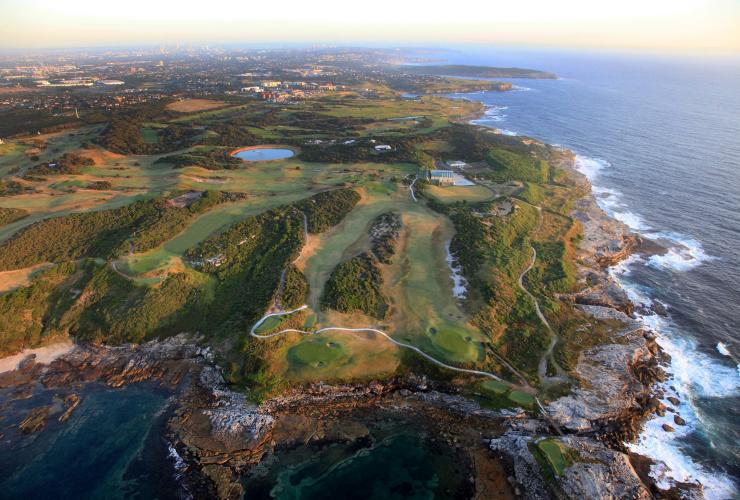 The first thing you notice from the clubhouse after entering the New South Wales Golf Club, situated on the rugged cliffs at La Perouse, is the 360-degree view of surrounding Botany Bay and Sydney’s spectacular city skyline. A breathtaking course framed by the Pacific Ocean on all sides, the New South Wales Golf Club was designed by Dr. Alister MacKenzie and is a wonderful combination of undulating fairways, scenic vistas, and a spectacular traditional clubhouse that offers five-star comfort. The fifth and sixth holes are known for being one of the best double acts in the world, particularly the latter hole, which is played from a rocky outcrop overlooking the ocean and demands player precision and supreme focus. The recent addition of a multi-million-dollar practice and training facility further cements the NSW Golf Club’s position as one of the leading facilities in Australia. 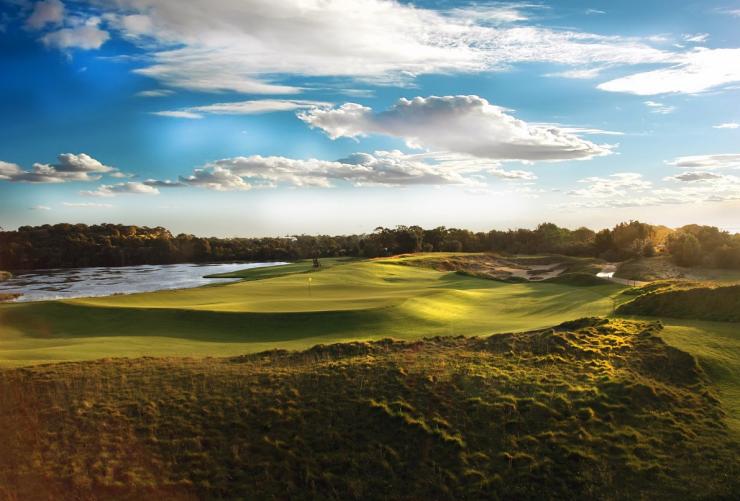 As one of Australia’s most distinguished private clubs, The Lakes Golf Club (just 15 minutes from Sydney’s city center) borders the Botany Aquifer and Wetlands area, which has an abundance of wildlife as well as provides daunting hazards on the course. The par five fourteenth hole with its famous water carry is the biggest and wildest green on the course and is a challenge for every golfing level. 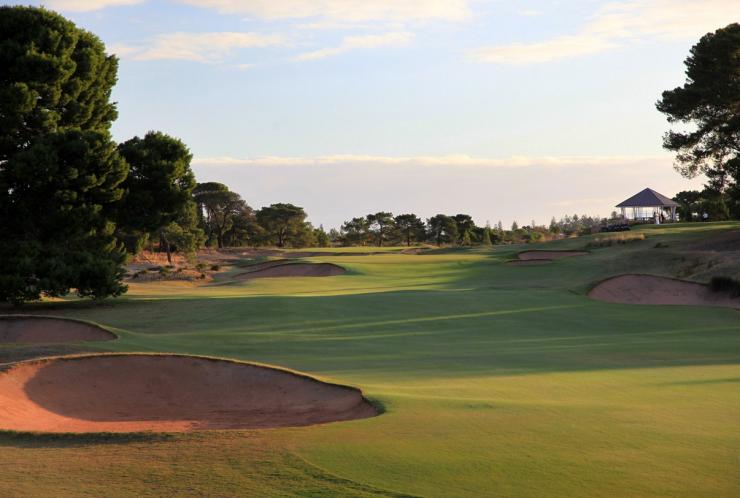 With a core of outstanding holes and an unmistakably adventurous streak, Dr. Alister MacKenzie-designed Royal Adelaide Golf Club provides a platform for creative shots and an extremely enjoyable golfing experience. The expansive links course is set along the sandy craters and dunes of beachside Seaton with native flora and fauna protected, while the Grange Railway still transects the course. It has hosted numerous Australian Open competitions over the years. The third hole is said to be one of the best par fours in the world. 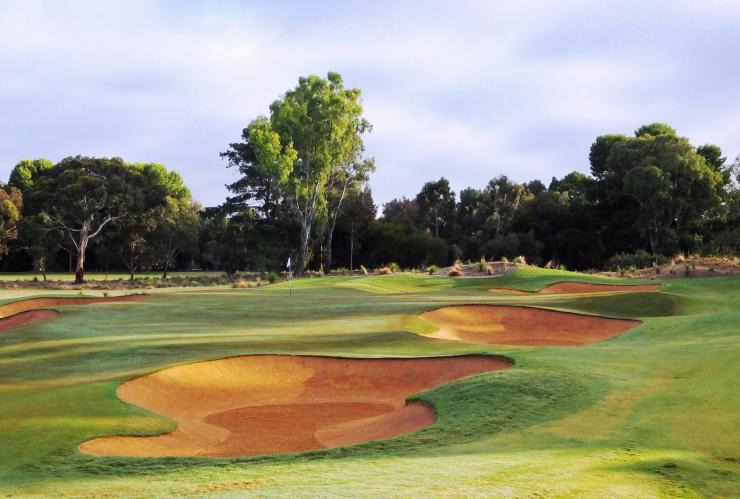 Consistently rated among top golf courses in Australia, Kooyonga Golf Club has long been recognized for its superb conditioning and playability all year round. The course layout is testing but fair. The late Peter Thomson, after winning the 1972 Australian Open Championship at Kooyonga, probably best described the course from the player’s point of view when he said, “It needs to be played with the head as much as the hands.” 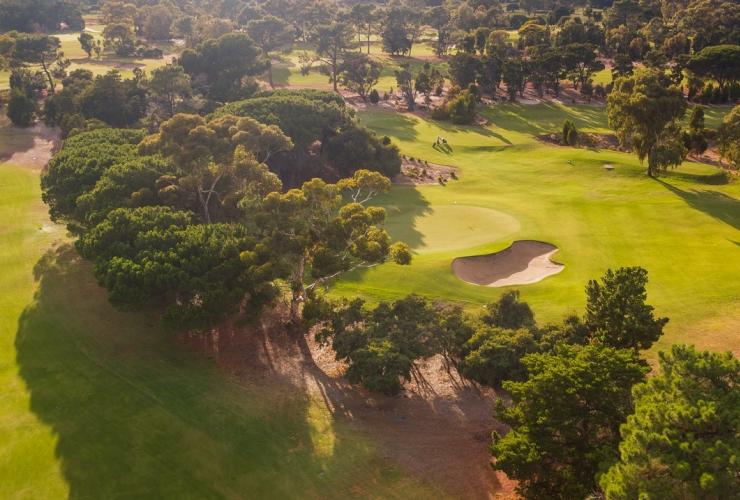 One of South Australia’s premier sporting venues, The Grange Golf Club combines two exceptional 18-hole golf courses and was host to both the 2016 and 2019 Women’s Australian Open. Golfing Great Greg Norman said, “Just the name ‘The Grange Golf Club’ conjures up the most pleasurable and exciting memories; the birthplace of my professional career where I won the West Lakes Classic, my first professional victory. The camaraderie is second to none. It is a club with all the finest Australian traditions of golf and everything that is associated with this wonderful sport we all love. I’m sure everyone who visits this great club will experience the same pleasure.” Situated on Dent Island in the Whitsundays region of the Great Barrier Reef, the Hamilton Island Golf Club has a spectacular setting and is Australia’s only championship golf course on its own island. The challenging course, designed by champion pro-golfer Peter Thomson, blends seamlessly into the natural undulating landscape. With holes positioned along ridges and played across steep valleys, the course is a joy to play while the ever-present sea breeze adds to the experience. After your round, relax in the stylish clubhouse and enjoy stunning views of one of the world’s most celebrated natural wonders.