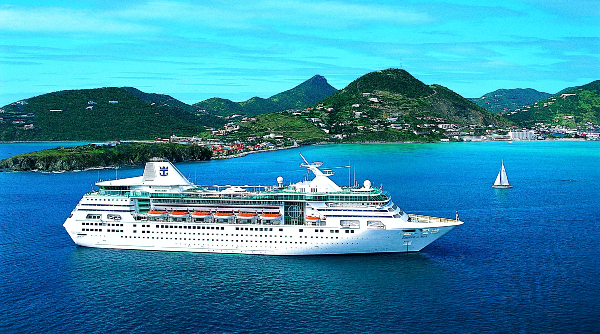 Royal Caribbean was founded in 1969 and contained 3 ships by 1972. Today, this cruise line sails every major sea, with 240 destinations spanning 60 countries. It also boasts some of the world’s largest ships, including Wonder of the Seas at 1,188 ft long. There are currently 26 ships in the fleet with 2 more to be released including Utopia of the Seas & Icon of the Seas. All vessels all categorized into classes based on similar features, amenities, and onboard activities. To help you understand the different classes including what they offer and where they sail, let’s embark on a ship comparison.

To help simplify the explanations, we will eliminate “of the seas” from each ship name and will refer to them by their unique names.

⦿ To watch our video version of this article, visit our YouTube channel HERE and use the highest quality playback setting. 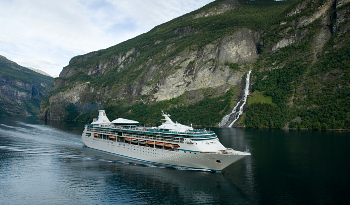 As the oldest and smallest ships in the fleet, they lack the most current activities and attractions but still have a lot to offer such as rock climbing, mini golf, a poolside cinema, live entertainment, and more. This class includes 4 vessels – Grandeur, Rhapsody, Enchantment, and the class namesake – Vision, with a capacity range between 2400 and 2700 guests.  Depending on the ship, they contain between 9 to 14 bars, lounges, and restaurants – some are complimentary, and some are an extra cost. Vision Class has a distinguishing feature of nearly 2 acres of glass windows and walls for panoramic views of the ocean for sailings that include the Caribbean, Alaska, and Europe. 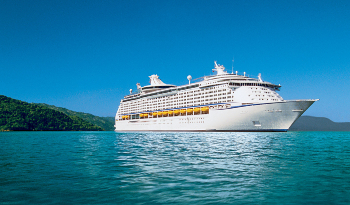 When the Voyager Class was launched in 1999, these were the largest cruise ships in the world at 1020 feet in length. This class contains 5 vessels, which include Explorer, Adventure, Navigator, Mariner, and the class namesake Voyager.  Ships have a capacity range between 3800 and 4200 guests. Onboard activities include an ice rink at sea and a shopping mall concept called Royal Promenade, plus a rock-climbing wall, mini golf, a FlowRider surf simulator, live entertainment, trivia games, crafts, and sports like basketball, shuffleboard, ping pong, etc. There are also 2 pools and several Jacuzzis. Between 14 to 19 bars, lounges, and restaurants are on board – some are complimentary, and some are at an extra cost. Vision class routes include Port Canaveral to the Caribbean, LA to Mexico, Miami to Europe, and Galveston to New England and Eastern Canada. 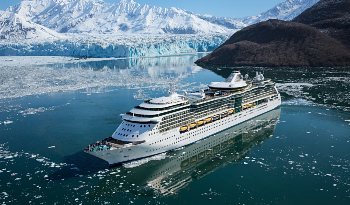 The layout of Radiance Class ships differs from most other classes with a large open area called a Centrum instead of a Promenade or Esplanade. Elevators run up the Centrum with shops, bars, cafes, and amenities on decks surrounding the elevators. This class contains 4 vessels including Brilliance, Serenade, Jewel, and the class namesake Radiance, with a capacity range between 2400 and 2700 guests. At 962 feet long, distinguishing features include 3 acres of glass for stunning views, 2-level dining rooms, and a pool with a retractable glass roof. They also offer rock climbing, mini golf, basketball courts, live music, dance classes, a movie theater, and theme nights. Radiance Class ships contain 15 to 19 bars, lounges, and restaurants and were built to sail around the world with destinations including the Arctic Circle, Vanuatu, and Turkey, plus traditional destinations like the Bahamas and Mexico. 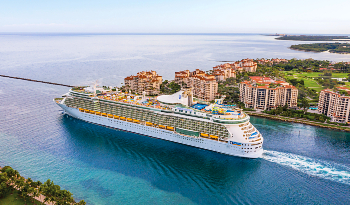 In 2006 Royal Caribbean launched the Freedom Class by introducing Freedom of the Seas, with a resort-style Caribbean pool deck. Freedom was joined by Liberty and Independence, with the 3 ships having a capacity range between 3400 and 4500 guests. Distinguishing features of the Freedom Class include cantilevered hot tubs, a FlowRider surf simulator, water slides, and the H20 Zone, which is a colorful waterpark. Plus, they contain a rock wall, an ice rink, plenty of onboard sports, and between 6 and 15 bars, lounges, and restaurants that are a mix of complimentary and extra cost. 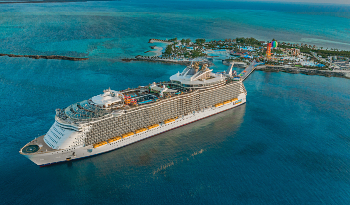 This class contains the largest and most distinctive ships with countless activities and dining options. Oasis of the Seas is joined by Allure, Harmony, Symphony, and the new Wonder of the Seas. The unique feature of the Oasis class is that ships are divided into 7 neighborhoods, while the new Wonder has 8.  Neighborhoods include The Boardwalk containing dining and entertainment, a carousel, and an arcade; The Pool and Sports Zone containing 4 pools, waterslides, and an adults-only solarium; Central Park for shopping and dining in a park-like setting of 10,000 plants; The Royal Promenade for more dining and shopping; Entertainment Place which hosts a comedy club, jazz club and more; Youth Zone for children’s immersive activities, and Vitality comprised of a gym, fitness classes, a spa, and beauty salon. Plus, there are between 20 and 27 bars, lounges, and restaurants depending on the ship. Cruise routes mainly include the Caribbean and Mediterranean. 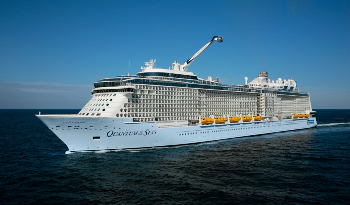 This class launched in 2014 with Quantum of the Seas and has been joined by Anthem, Ovation, Spectrum, and Odyssey, with Utopia coming in 2024.  Quantum ships feature the most modern designs and onboard activities in an indoor sports arena called SeaPlex. This includes dance and exercise classes, pickleball, soccer, roller skating, and volleyball, as well as bumper cars and a Circus School for acrobatics on a trapeze. Quantum Class also uniquely features a skydiving simulator by iFly and an observation capsule called North Star for 360-degree views of the ship. The pool deck presents indoor and outdoor pools, a splash area, and an adults-only Solarium, all under a retractable roof with climate control to allow swimming even while cruising Alaskan waters. These ships host 4900 to 5600 guests and offer 12 to 19 bars and restaurants. Spectrum and Odyssey technically belong to the “Quantum Ultra Class” due to extra features like additional specialty restaurants and The Skypad, which jets out from the ship with a glass walkway. Sailing destinations include Alaska, Hawaii, Australia, New Zealand, the South Pacific, Southeast Asia and Japan, and Europe.

What to Expect at Riu Latino – Costa Mujeres