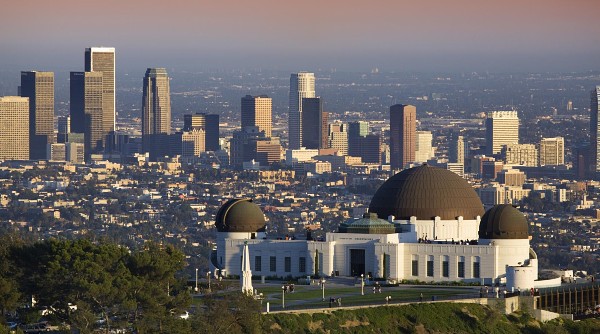 Top 10 Things to do for FREE in LA

It should come as no surprise that a visit to LA can be expensive. Packed with celebrities and folk from the entertainment industry, as well as foreign investors, the tech industry, and a slew of property developers, the region (for the most part) is known for its wealth; thus its upscale living and excesses. Many of the hotels are considered luxury destinations or exclusive boutique-style or are located in prime tourist areas that lean toward escalated nightly rates. Plus numerous restaurants are overseen by celebrity chefs and/or are frequented by celebs so meals and prices are high-end. Self-parking is costly, but a multitude of hotels and restaurants feature only valet parking which leads to repeated tipping and can be even more costly.  And attractions, such as amusement parks, don’t come cheap. Nevertheless, and rightly so, it remains to be a popular destination that travelers want to see.

With all that being said, a little research and advance planning go a long way when it comes to any vacation destination and LA is no different. So, if you do your homework you will discover plenty in the area that you can do cheaply.  You can find accommodations with moderate rates and much in the way of reasonably-priced meals.  You just have to know where to look, so put your internet to good use long before you travel.  And to get you started on where to visit, here is the alphabetical list of our Top 10 suggestions for things to do in LA that are inexpensive or FREE.

**To watch our YouTube channel video of the Top 20 Things to do in Los Angeles, click HERE 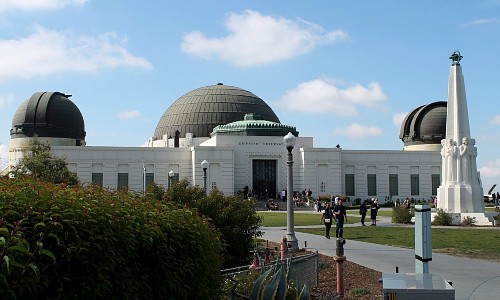 Griffith Park (home to Griffith Observatory) is one of the largest municipal parks in the US covering 4,511 acres of land. The park contains 50 miles of hiking trails so it’s a good place to get a little exercise while taking in the vast scenery, not to mention excellent views of the Hollywood on the hill sign.

But the most popular attraction is the Griffith Observatory which sits high on the south slope of Mount Hollywood. In addition to exhibits and high-powered telescopes that reveal the cosmos, the observatory features unparalleled views of Los Angeles, including Hollywood to the south, Downtown Los Angeles to the southeast, and the Pacific Ocean to the southwest. The observatory is open to the public Tuesday – Friday from noon to 10 p.m., weekends from 10 a.m. – 10 p.m., and admission is FREE. For guests wishing to see a planetarium show, there is a nominal fee. Parking near the observatory is limited to $10 per hour. For more information, check out Griffith Observatory’s website HERE. 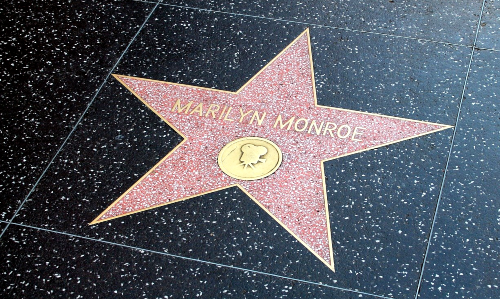 Hollywood and Vine – Walk of Fame – Photo via Pixabay

No trip to Los Angeles would be complete without a stop at the infamous and historical intersection of Hollywood and Vine, the home of old Hollywood and a plethora of notable buildings and restaurants. This area hosts the Walk of Fame, which is made up of more than 2600 terrazzo and brass stars embedded into 15 blocks of sidewalk along Hollywood Boulevard. This is a FREE tourist destination, where visitors can have their photos taken next to the stars of their favorite actors, comedians, directors, singers, and more.

Also, in this area is the TCL Theatre, where star-studded movie premiers take place, and the Pantages Theatre, which hosted the Academy Awards for years. The shopping concourse of the Hollywood and Highland Center is located here, along with the iconic round white building belonging to Capitol Records. Restaurants, bars, and a multitude of Hollywood souvenir shops are in the vicinity of Hollywood and Vine, along with an eclectic mix of people that is sure to open your eyes. 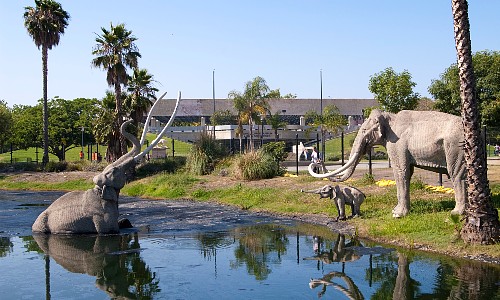 This urban area of Los Angeles, known as Hancock Park, plays host to a group of tar pits where natural asphalt and dense petroleum (brea in Spanish) seeps up from the ground as it has done for thousands of years. Over time, the tar has preserved the bones of many trapped prehistoric creatures that died there, most often because they got stuck in tar and were unable to get out. As such, many starved there or were preyed upon by carnivores that would enter the tar pits for a meal that was powerless to get away, but they would also end up stuck.

On the property of the tar pits sits The George C. Page Museum which displays several exhibits of the type of prehistoric animals that died there. The museum also features interactive presentations and movies. La Brea Tar Pits is a registered National Natural Landmark from which 3.5 million fossils have been recovered to date. And the excavation continues to prudently search the tar pits for more fossil remains. Watching the unique process is FREE to the public and it just might yield an exciting surprise, such as a dinosaur bone or skull. 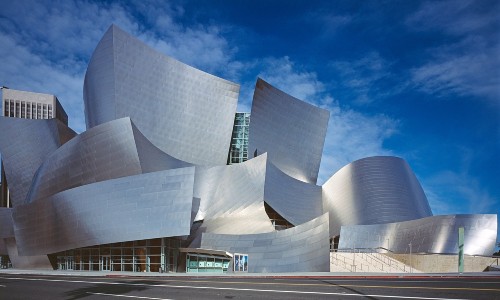 Several museums in LA are free to explore. For contemporary art, head downtown to The Broad.  Admission is free unless there is a special event or exhibition happening.

The Getty Centre is also free.  Set high atop a high with spectacular views all around, from down to the Pacific Ocean, the Getty Centre offers guests a look at stunning art and architecture.

California Science Centre is educational with a look at ecosystems, space, technology, transportation, and architecture.  Admission is free of charge, however, add-ons such as the IMAX theatre come at a price.

The Hammer Museum is located within Westwood Village, at the corner of Westwood and Wilshire Boulevards, and offers free admission to all exhibitions and programs. The National Historic Landmark known as the Bradbury Building in Downtown LA is free to visit.

In this category, we are also going to add the Walt Disney Concert Hall.  Of course, tickets to an actual concert come with a price tag, but if you are interested in touring the property, you can do so for free with an hour-long guided or audio tour. 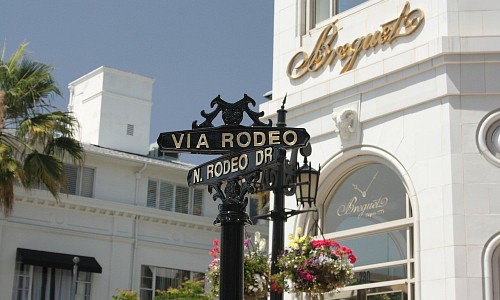 This is one of the most iconic streets in America and has been famously featured in such movies as Pretty Woman (Julie Roberts, Richard Gere, Clueless (Alicia Silverstone), the Beverly Hills Cop 1, 2 and 3 (Eddie Murphy), Incredible Love ( Sylvester Stallone, Whoppi Goldberg) and many, many more.

Technically, it is only 2 miles long, but offshoots cause the area to cover approximately three blocks. Rodeo is famous for its upscale dining, hospitality, and shopping, with high-end designer stores lining the palm-tree studded sidewalks.  Gucci, Chanel, Dior, and many more project modern storefronts, while an offshoot onto 2 Rodeo Drive dramatically changes the view to European-inspired buildings. Meanwhile, the most pricey and extravagant vehicles, mainly supercars, rumble down the street.

A visit to LA would not be complete without a stroll down Rodeo Drive.  It’s a great place to be ‘wowed’ and it’s something you can do for free… unless you decide to purchase something from one of the pricey shops. 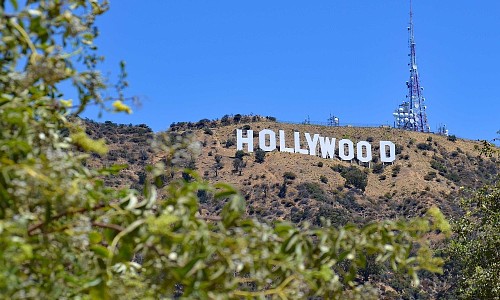 Extremely popular among visitors and locals, including celebs, is Runyon Canyon Park, for hiking, jogging, and dog walking.  This 130-acre area is located in Hollywood on the east end of the Santa Monica Mountains, with different trails providing different views. From the East Ridge Trail, visitors have a spectacular view of the Hollywood Sign and Griffith Park. For wider sweeping views, continue up the ridge to Clouds Rest, which overlooks Los Angeles from an elevation of 1,040 feet.

From Runyon Canyon, visitors will be able to see everything from Downtown LA, to Koreatown, to Santa Monica and the Pacific Ocean. Not only is this experience free, but it’s also a good opportunity for exercise, photography, potential stargazing, or for making furry friends considering the sheer number of dogs at the park, Plus, there’s an opportunity for a secondary freebie with complimentary yoga which can be found at the Fuller Avenue entrance. Click HERE for more yoga information. 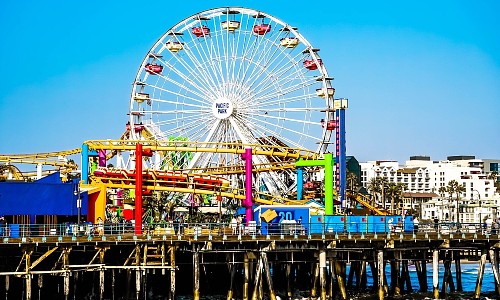 This popular attraction for locals and visitors alike has been featured heavily in movies, TV shows, and commercials. It contains areas for viewing and fishing, concession stands, and a small but famous amusement park containing a solar-powered Ferris Wheel. It also features the original circus-like carousel from the 1920s and the Santa Monica Pier Aquarium, which is operated by Heal the Bay. Diverse shops, a video arcade, eateries, and even a trapeze school also occupy space on the pier.

Of course, many of the above-named activities are pay as you go but visiting the pier and taking in the sights is free.  Plus, due to its location and crowds, the pier doubles as an outdoor concert venue and hosts numerous other activities that are also free. 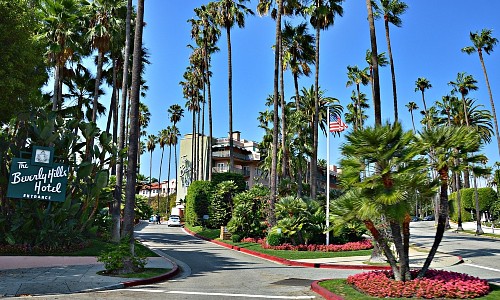 This infamous 22-mile stretch of twisting, turning boulevard travels from Downtown Los Angeles to Hollywood and then tracks southwest through several exclusive neighborhoods as it makes its way toward the ocean where it ends at Pacific Coast Highway. Familiar areas along the way include Silverlake, Hollywood, West Hollywood, Beverly Hills, Bel-Air, Brentwood, and Pacific Palisades. Sunset intersects with Rodeo Drive and at the corner sits one of the most iconic Hollywood accommodations — The Beverly Hills Hotel.

For energetic, adventuresome visitors, it’s possible to walk the 22 miles to see everything this famous boulevard has to offer, making this a truly free activity. However, if you’re in LA with a car, driving the strip is well worth the time and effort to see everything from the city to the beach, including some of LA’s most well-known establishments. These include the House of Blues, the Chateau Marmont hotel, the Guitar Center, the Saddle Ranch, Comedy Store, Hollywood High School, UCLA, and several famous nightclubs including The Viper Room, the Whisky a Go-Go, and the Rainbow Bar and Grill. 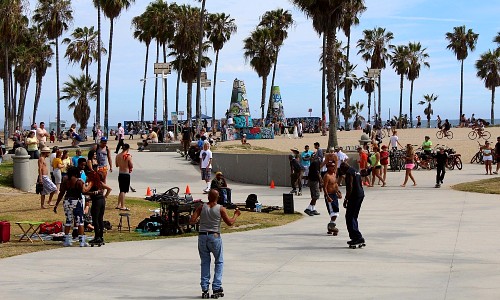 Originally, Venice was founded as a seaside resort area in 1905. Today, it is a residential, commercial, and recreational oceanfront neighborhood known for its beaches, hippie and skater culture, and 2.5-mile boardwalk. The boardwalk is a spectacle of vendors, eateries, fortune-tellers, performers, and a multitude of varied artists. Proof of that exists in the graffiti that is featured in the area. Venice also prominently displays an outdoor workout space known as Muscle Beach.

A walk along the boardwalk is free and greatly entertaining. 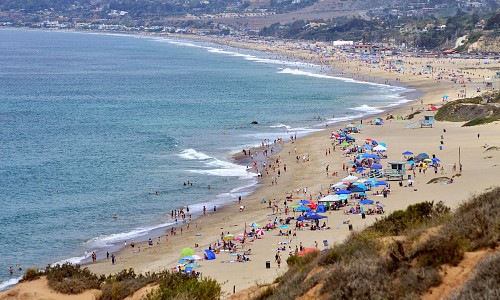 Zuma Beach is located within Malibu County. It’s one of the largest and most popular beaches in Los Angeles and is famous for its wide stretch of sand and outstanding surf. Parking is plentiful and so are lifeguard posts and washroom facilities. For anyone familiar with the 90’s TV show Baywatch, Zuma Beach is sure to stir up plenty of memories.

The drive time from downtown LA to Malibu is only 36 miles; however, traffic can get quite heavy on the Pacific Coast Highway so don’t expect those miles to click off quickly. No doubt you’ll be hungry by the time you get there, so consider stopping by Paradise Cove.