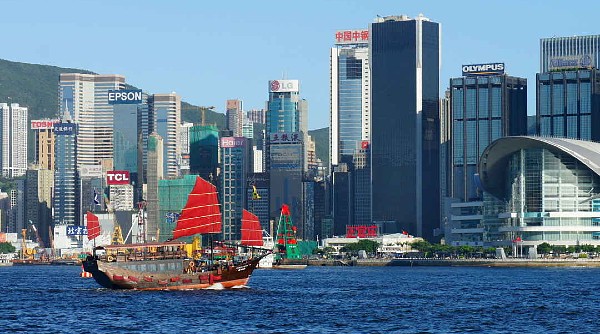 Let’s face it, when visiting an exotic location rife with history, such as Hong Kong, it’s an absolute certainty that tourists will find more than their fair share of things to see and do during their vacation.  As a matter of fact, it’s likely there will be so very much that’s interesting, unique, and worthy of time and attention, that there won’t be nearly enough hours to fit everything into your itinerary.  As such, some things, unfortunately, will have to be left off the list.

To help you figure out what to include in your schedule, we have assembled the Top 10 Attractions according to Hong Kong’s official tourism site, Discover Hong Kong. 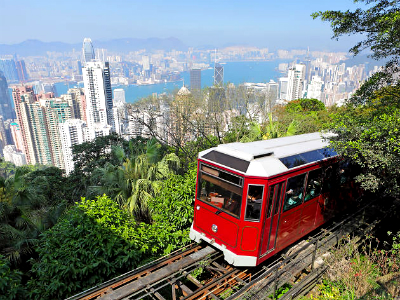 If there is only one thing you have time for in Hong Kong, go to The Peak. If you have many things on your schedule, still go to The Peak. The highest point on Hong Kong Island has been the city’s most exclusive neighborhood.  The view is what makes The Peak one of the most popular attractions in Hong Kong. By day, your eye stretches across sparkling skyscrapers and Victoria Harbour all the way to the green hills of the New Territories. In the early evening, this panorama melts into pink and orange before reincarnating as a dazzling galaxy of light, shimmering beneath you. And if you listen carefully enough, you can hear Asia’s world city humming below.

The Peak Tram
Riding the Peak Tram is a visual experience in its own right — Hong Kong Island’s skyscrapers slide past your window at what appear to be impossible angles as you make the ascent to The Peak on the city’s historic, funicular railway.

Located at Lower Terminus, The Peak Tram Historical Gallery is a way of paying tribute to The Peak Tram, its heritage, and the history of Hong Kong. Since 1888, The Peak Tram has served Hong Kong, quietly witnessing 120 years of the city’s changes. The gallery brings back many memories for local visitors and gives overseas visitors a glimpse of how the Pearl of the Orient has come to shine. 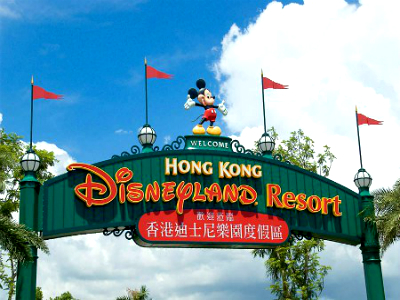 Get ready for non-stop Disney fun with all your favorite rides and characters! Extend the magic with a hotel stay to enjoy world-class hospitality and indulge in incredible meals by award-winning chefs. Don’t forget to pick up cool gifts for your loved ones to share the magic of Hong Kong Disneyland!

Guests staying at the Hong Kong Disneyland Resort are invited to join fun activities throughout the day at the recreational facilities of the hotels. Young guests can participate in arts and crafts to create their own handmade Disney artwork, while families can meet Disney Friends. 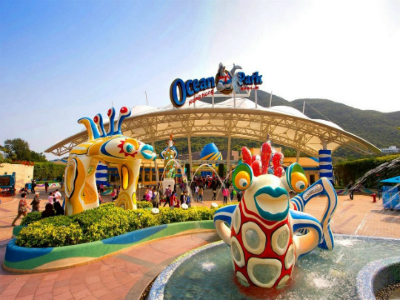 Opened in 1977, Ocean Park Hong Kong is a marine-life theme park featuring animals, thrill rides, and shows. It is located on the southern side of Hong Kong Island, with an area of more than 915,000 square meters. The two major attractions areas, the Waterfront and the Summit are connected by the Cable Car and Ocean Express funicular train.

In celebration of its 40th anniversary this year, the park is offering classic Hong Kong street food from the 70s with a modern twist, available throughout the year. Come indulge in contemporary fusion cuisine with the ‘Rediscovering Classics’ 40th Anniversary Set Menu as well as scrumptious a la carte items at selected park restaurants.

Ocean Park, Hong Kong is committed to promoting and supporting animal conservation in Hong Kong and throughout Asia. Part of the proceeds from admission tickets and some retail items will go towards the Ocean Park Conservation Foundation Hong Kong to support wildlife conservation projects. 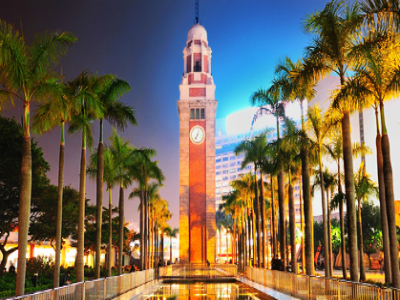 Standing 44-meters tall, with a 7-meter lightning rod atop, the old Clock Tower is located on the southern shore of Tsim Sha Tsui, Kowloon.

It was erected in 1915 as part of the Kowloon–Canton Railway terminus. The once-bustling station is long gone, but this red brick and granite tower, now preserved as a Declared Monument, survives as an elegant reminder of the Age of Steam.

It has also been a memorable landmark for the millions of Chinese immigrants who passed through the terminus to begin new lives not just in Hong Kong, but in other parts of the world via the city’s harbor. 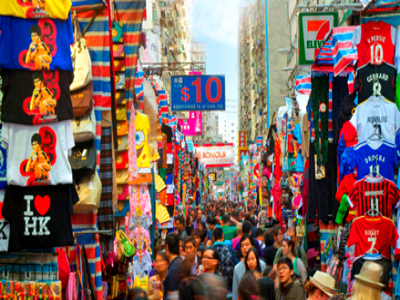 With over 100 stalls of bargain clothing, accessories, and souvenirs, the Ladies’ Market on Tung Choi Street provides a one-kilometer stretch on which to practice your haggling skills.

The market gets its name from the huge amount of clothing and accessories on sale for women of all ages; however, with watches, cosmetics, bags, home furnishings, CDs, and trinkets also up for grabs, you don’t need to be just in the market for a pair of nylon stockings to find something within its crowded aisles. As a matter of fact, you don’t have to be a lady.  There’s something for everyone here. 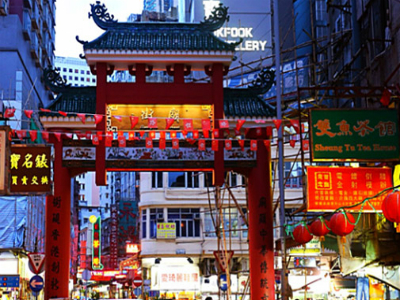 When the sun goes down, the traders have already laid out their wares and the opera singers and fortune tellers begin to emerge. Welcome to the Temple Street Night Market, a popular street bazaar, named after a Tin Hau temple located in the center of its main drag, and a place so steeped in local atmosphere that it has served as the backdrop to many a memorable movie.

Trinkets, teaware, electronics, watches, menswear, jade, and antiques are scrutinized and haggled over, while clay pot rice, seafood, noodles, and other treats are consumed with gusto.

Temple Street Night Market is an enduring example of the theatre and festivity of a Chinese market. And it’s on show nightly. 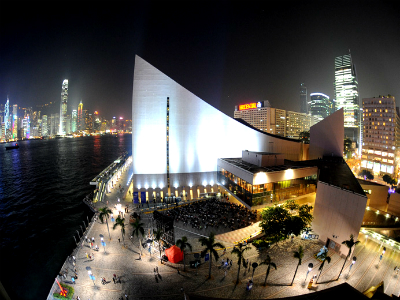 Starting at the colonial-era Clock Tower and stretching all the way to Hung Hom, a stroll along the Tsim Sha Tsui Promenade takes tourists past the Hong Kong Cultural Centre and the Hong Kong Space Museum.

But like most of the lovebirds and shutterbugs on the promenade, your gaze will be drawn south to the dramatic topographical and architectural spectacle that is the Hong Kong Island skyline towering over the busy waters of Victoria Harbour.

Tsim Sha Tsui is a major tourist hub, with many high-end shops and restaurants that cater to tourists. 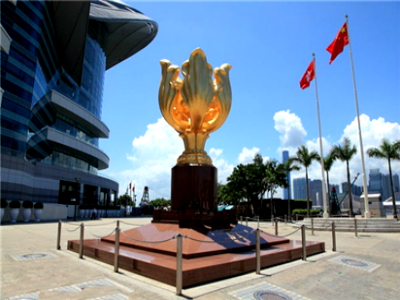 The bauhinia is the emblem of Hong Kong. The Forever Blooming Bauhinia Sculpture that gives the Expo Promenade the commonly used name, Golden Bauhinia Square, was a gift from the Central Government to mark the 1997 Handover — an occasion that held tremendous significance for the world’s largest nation and that stands out as a landmark event in 20th-century history.

Today the site is hugely popular with Chinese visitors who come to take photos of the Reunification Monument, which bears inscriptions of the calligraphy of President Jiang Zemin who represented China at the Handover Ceremony and to enjoy the pomp and symbolism of the daily Flag-raising Ceremony with beautiful Victoria Harbour as a backdrop. 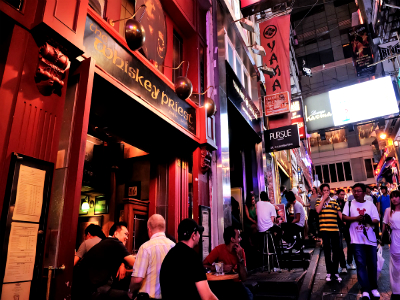 Lan Kwai Fong is one of Hong Kong’s most popular nightlife hotspots and home to over 90 restaurants and bars. The atmosphere ranges from stylish wine pairings to raucous jelly shots and the food on offer is as diverse as the clientele.

Thanks to Hong Kong’s dominance in Asian cinema, this center of late-night revelry is so renowned that its official street sign is more photographed than many of the celebrities who haunt its clubs. Mostly, the area is crowded with people from the surrounding offices of Central, eager to shake off the working day or week. Get in the thick of it with a street side perch, or watch the antics on the road below from one of the upper floors.

Lan Kwai Fong usually hosts carnivals and other celebrations during major festivals, such as Halloween, Christmas, and New Year, and has its own beer festival.

Avenue of the Stars 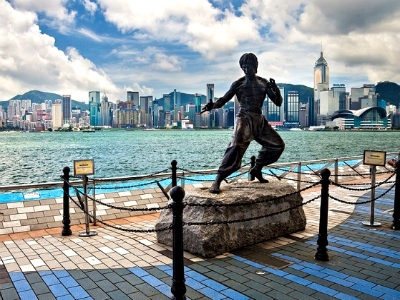 Thanks to the efforts of Hong Kong’s movie industry over the past century, many in Asia and farther afield are familiar with the city’s sights before they’ve even set foot here.

The Avenue of Stars pays tribute to the names that helped make Hong Kong the Hollywood of the East.