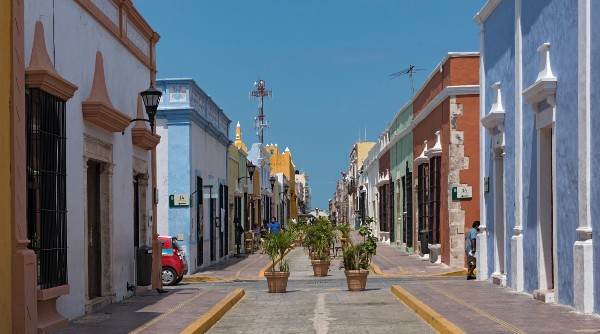 Mexico offers travelers diverse landscapes and a myriad of experiences — everything from the densely populated, high-altitude capital of Mexico City to the tropical paradise of the Yucatan Peninsula with views of the Caribbean Sea, and from the laidback resort towns of Cabo and Ixtapa on the Pacific Coast to the “magical” towns that are steeped in history and culture.

Pueblos Magicos are towns recognized by the Mexican government for their ‘magical’ features, including beauty and rich heritage. Colonial architecture, authentic gastronomy, colorful streets, quaint patio terraces, handmade artisan goods, and historic parks provide a wonderful sightseeing experience for travelers.  We strongly advise leaving your resort for a day trip to explore one or more of these fascinating towns.  It will open your eyes to a delightful and educational experience that will leave you with fond memories, countless Instagrammable photos, and a better understanding of Mexico’s storied past. Although Mexico boasts 132 such towns, the following are our Favorite 5. 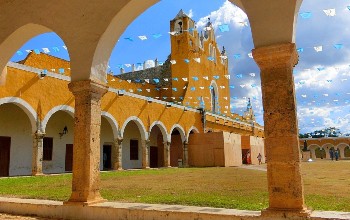 Located inland, halfway between Chichen Itza and Merida, lies the laidback town of Izamal. It’s a fantastic place for tourists to visit and explore but it’s surprisingly quiet.

Like many of Mexico’s towns, Izamal is an engaging blend of the country’s Mayan heritage, the Colonial era, and modern-day life.  The difference here is the color.  Whereas many of the magical towns feature buildings in a rainbow of vivid or pastel shades, the hues are strictly yellow, bronze, and buff in Izamal.  Due to the architecture and archeological sites, the town is thought to be among the oldest establishments of the ancient Mayan civilization and has attained a place on UNESCO‘s tentative list.

Izamal occupies only four square miles so it’s easily walkable for sightseeing, and there are plenty of drinking and dining options when you’re ready to put your feet up for a while. The town also stands out for being the only inhabited ceremonial center, which adds one more reason to visit. 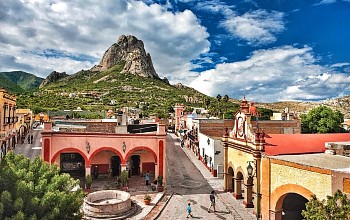 Among the more famous magical towns is Peña de Bernal, located near the wine region of the Sierra Gorda.

Towering behind the town is the namesake — Peña de Bernal (English translation: Bernal’s Boulder or Bernal Peak) which stands 433 meters or 1,421 feet in height.  It is one of the tallest monoliths in the world and is believed to have formed during the Jurassic period. The Peña is considered a sacred site within Otomí-Chichimeca culture, owing to the pre-Hispanic cross carved out of stone that lies at its summit. It’s possible to hike approximately 80% of the way to the top for beautiful views of the town and surrounding countryside.

However, if you’d prefer to remain at street level, you’ll be rewarded with beautiful colonial architecture, plenty of options for local cuisine, and a variety of artisan crafts. 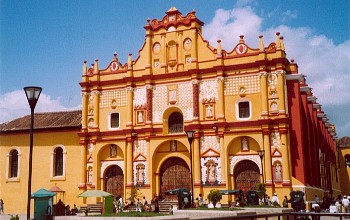 Located in the mountains at an altitude of 1.36 miles high, travelers will find San Cristobal de las Casas cooler than most of the magical towns, which makes it a little more comfortable for exploration.

The architecture here is well-preserved and slightly fancier than most towns with a baroque style of intricate ornamentation. The central Cathedral (shown here), along with Templo Santo Domingo, and the two churches of Iglesia de Guadalupe and Iglesia de San Cristobal are popular points of interest.  There are also three museums to explore, plenty of cafes, and a local craft market. And don’t forget to take time to savor the taste of a locally grown cup of coffee. 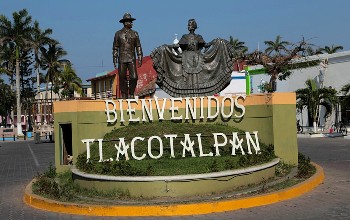 Tlacotalpan is a UNESCO World Heritage town in the Gulf state of Veracruz. Due to its location, it features a tropical Caribbean atmosphere with low-rise buildings painted in a vibrant rainbow of colors, and plenty of palm trees and beautiful gardens along the streets.

Founded in the mid-16th century, this Spanish colonial city has a large number of historic buildings that feature arched terraces, grand columns, and ornate detail. The majority of these can be found around Parque Hidalgo and Plaza Zaragoza.

Consider visiting during the Fiesta de la Candelaria.  This annual 100-year-old festival features music and celebration in the streets.  Residents dress in red, and the town decorates with an explosion of colorful flowers. 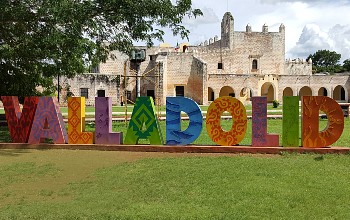 The town of Valladolid lies approximately 150 km west of Cancun, 40 km east of the Mayan Ruins of Chichen Itza.  Originally named Zaci and inhabited by the Maya people, the scenario changed drastically during the Spanish invasion of the region in the early 1500s. Get your cameras ready because there is a lot to capture, from sidewalk cantinas to pastel-colored homes and businesses lining the streets.  A romantic gathering area called Francisco Cantón Park fills the main square, offering up-close views of the Cathedral of San Gervasio.  Other places of interest include the San Roque Museum, the Mercado de Artesanías (Handcraft Market), and Casa de Los Venados (House of the Deer) which is a private home that features Mexican folk and contemporary art. Stop at the Valladolid sign for a picture-perfect photo for Instagram, and be sure to check out Convent of San Bernardino de Siena, believed to be one of the oldest churches in North America.

⦿ For highlights of Valladolid, watch our tour video HERE

What to Expect at Hyatt Ziva Los Cabos – with video