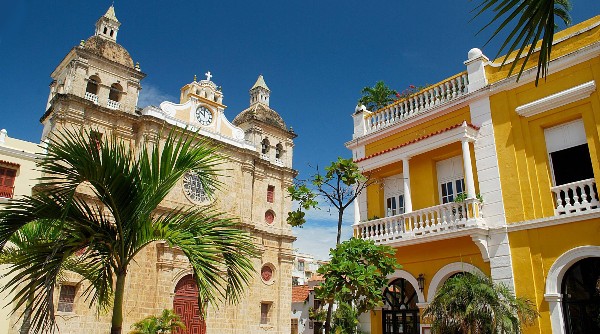 Colombia is reborn and welcomes visitors with open arms and countless wonders.  With stunning biodiversity, the country offers countless adventures and a myriad of memories.  If you suffer from wanderlust, put this country on your must-visit list.

Here are the Top 10 Reasons to Visit Colombia

In numerous traveler surveys, Colombians were celebrated for their kindness and goodwill, and ultimately as one of the main reasons to visit the country. As a result, and rightfully so, Colombia’s new catchphrase is “The Most Welcoming Place on Earth.”

Colombia has come a long way to reinvent itself. The country has discarded its dark and problematic image of drug cartels and cocaine smugglers and has moved into a modern mindset of eco-friendly enterprises.  The country is effectively earning a reputation of being one of the best places to visit in South America, with beautiful and colorful new regions for travelers to explore.

Colombia ranks second amongst the 12 most biodiverse countries in the world. According to the Biodiversity Information System, there are 51,330 species registered in the country, with more than 1,920 bird species, 528 types of mammals, and 1,521 species of fish. That’s 10% of the entire planet’s biodiversity.  The six natural regions of Colombia host almost every type of ecosystem on earth, from tropical rainforest and cloud forest to open grassy plains and high-altitude moorlands.

The geography of Colombia offers a mix of tropical Caribbean beaches to the north and Pacific coastline to the northwest, with the added bonus of humpback whale migration from July to October.  All of this sits with a gorgeous backdrop of the jungle as well as snowcapped mountains, including the San Luca and La Macarena mountain ranges.  Through the center of the country, travelers will find snow-covered volcanoes and mountains of the Andes.  And there are deserts in the north and vast grasslands, called Los Llanos, in the east.  When visitors are have had enough exploring the landscape, colorful little towns and big cities like Cartagena, Armenia, and Bogota offer tourists a look at history and architecture, and tours that feature the thriving food and art scene.

Barranquilla’s carnival is the biggest celebration of folklore in all Colombia and one of the world’s largest carnivals, with more than a hundred years of tradition. The festivities run for four days and Colombians and visitors alike party in the streets in a colorful celebration of Colombian culture. It comes with a spectacular display of Colombia’s melting pot of cultures: African, Indigenous, European, and Middle Eastern.

Bogota is a metropolis that has reinvented its spaces and has become cool and cosmopolitan. In San Felipe, more than forty spaces converge between galleries, cafes, breweries, bars, and places of culture, art, and gastronomy. Since the Bogotá International Art Fair (ARTBO) began in 2004, the accelerated growth of these spaces has redefined the city. The appearance of a new collection of installation, performance, and contemporary art has transformed the country’s capital into an international city that experiences culture as an encounter rather than as a mere observation action.

7. The Best Cup of Coffee

For coffee lovers, Colombia is the place to be.  The country is famous for growing some of the best coffee beans in the world; the plants thrive under the shade of banana trees in the tropical climate. Because of Colombia’s high altitude, it also shapes the way the bean grows. Most Colombian coffee is grown in the Paisa Region, also known as the Coffee Triangle.  And not only can visitors savor an unforgettable cup of coffee, but they can also embark on one of many coffee tours for an up-close and personal experience.

Colombia’s diverse landscape has become a hub for cycle-tourism with several tour providers offering bike tours of the best Colombia has to offer — everything from coffee plantations and flower farms to heritage towns and green mountains.  Some bike adventures climb high above sea level and stop for a swim to cool off, while others combine the bike ride with a foodie experience for lunch. If you can pedal and keep up with the guides, a bike tour will offer much in the way of exploration.

Colombia is known as “The land of a thousand rhythms” but actually holds over 1,025 folk rhythms that blend European and Spanish characteristics with African beats and aboriginal rhythms. Some of the best-known genres are vallenato and cumbia, the latter of which began as a courtship dance among the African population on the Caribbean coast of Colombia. The style of dance is designed to recall the shackles worn around the ankles of the slaves. The many rhythms of Colombia help to invigorate the cultural scene and further ensure that this a must-see destination for music lovers.

Colombia has become a model country for sustainable tourism. The country fully recognizes the need to protect the environment and support local communities. And, to prove its commitment, the government has joined with the Future of Tourism Coalition, a worldwide group devoted to ensuring travel and tourism remain a vital force for good. As one of the 20 founding signatories, the Colombian Government has promised to uphold the coalition’s 13 guiding principles which include maintaining sustainable standards, reducing climate impacts, guaranteeing fair income, and encouraging responsible business practices.
0 FacebookTwitterPinterestEmail
previous post