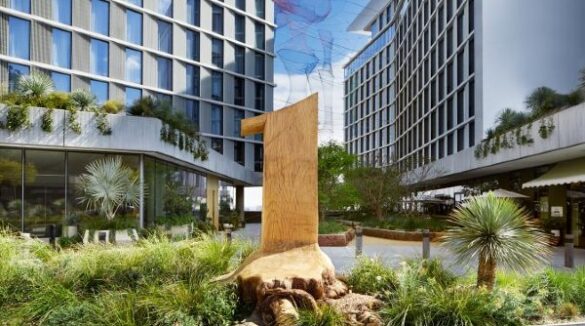 Unfortunately, 2020 will be remembered namely the pandemic, but as unpredictable and disastrous as the year was, there were also some bright spots.  And one of them was a sudden surge in hotel developments in downtown Toronto, confirming that tourism is expected to rebound after Covid-19.

Here are the five new luxury hotels that were or will soon be introduced to the city of Toronto, otherwise known as The Six.

Toronto’s first W Hotel will be a 9-story, 255-room luxury property surrounded by Bloor Street’s high-end shopping boutiques and will also feature a DJ booth recording studio. Located in the fashionable Yorkville neighborhood, the property will be surrounded by high-end boutiques, galleries, and design studios as well as cafes, bars, and fine-dining restaurants. The $40 million design transformation began in July 2019 and will reinvent the property’s guest rooms, restaurants, and amenities.

W Toronto is expected to feature multiple food and beverage venues, including an indoor/outdoor lobby bar and lounge, a specialty restaurant, and a 9th-floor rooftop restaurant (pictured to the left), accessible from street level with a glass exterior elevator, and a specialty coffee and cocktail bar. W Toronto will also offer up a 3,300 square foot fitness facility.

Temporarily delayed due to Covid-19 but also coming soon is 1 Hotel Toronto. The hotel was inspired by Canada’s natural and sustainable surroundings, the character of King Street West, and the Toronto marketplace.  1 Hotel reuses existing structural and reclaimed materials gathered from the local community, including timber, driftwood, and local limestone in the building of the hotel.

Some of the sustainable elements found in other 1 Hotels include filtered water all throughout the building, energy-efficient heating and cooling systems, rainwater reclamation system, and low-energy light bulbs.

Scheduled to open in late 2020, Ace Hotel Toronto was designed in partnership with acclaimed architects Shim-Sutcliffe. The Ace Hotel Toronto is inspired by the multicultural blend of traditional and modern and will be the brand’s first Canadian location.

There will be 124 rooms, plus a gourmet restaurant and a rooftop bar. In keeping with the brand’s industrial vibe, there will be red brick and exposed concrete featured throughout the property. “The public spaces feature North American materials valued for their intrinsic strength and integrity, and tied to Toronto’s layered history and natural resources including Douglas fir, red Toronto brick, and steel,” according to hotel representatives.

Nobu Hotel, Residences, and Restaurant will open in late 2020. With its modern and minimalist Japanese design, it will be a game-changer in the city. The Nobu Hotels, Restaurants, and Residences will interact to provide Nobu products and services that will share the vision of the unique Nobu food experiences. The 45-story building includes a hotel, the flagship Nobu restaurant, a spa, and private residences.

The Nobu residential towers will feature 660 units, while the hotel will offer 36 boutique suites. The building will retain the brick façade of the original Pilkington Glass Factory with two modern towers rising above. Both towers will be for exclusive residences, with a signature Nobu Hotel on top of the West Tower.

Located on Avenue Road, Toronto, The Park Hyatt‘s 219 guest rooms will include 40 well-appointed suites, including a presidential and two multi-level suites, a redesigned lobby experience, and a new 8,000 square foot Stillwater Spa with 13 treatment rooms.

The hotel will feature a redesign of the lobby restaurant and the 17th-floor cocktail bar with an expanded terrace overlooking the city skyline.

The 14,000 square feet of meeting and event space will include a new 500-person capacity ballroom, dedicated Kosher banquet kitchen, residential event spaces, and a 17th-floor event space for meetings and socials.

What to Expect at Bahama Bay Resort – Orlando