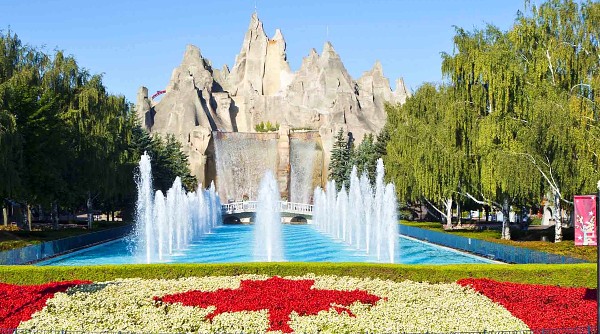 Throughout the years, Ontario has seen many amusement parks come and go.  As examples: Maple Leaf Village, Niagara Falls (opened 1979, closed 1995), Boblo Island Amusement Park (opened 1898, closed 1993), and Ontario Place (opened 1977, closed 2011). However, there has been one park that has risen to the top, has broken and set many records, and ultimately became the best in Canada. That park is Canada’s Wonderland just north of Toronto.

Opening its gates for the first time in May of 1981, the park has undergone two different ownerships – first Paramount and currently Cedar Fair, which operates 11 similar parks throughout North America. Yet, despite the change of hands, the park has retained its original look and feel, as well as many of the same rides and shows.  To that end, the cliff diving show from the top of Wonder Mountain is still running after 35 years and still draws a crowd.  Similarly, the section of the park known as Medieval Faire continues to feature a show on the water, called Arthur’s Baye.  This year the show is Kinet-X Dive, presenting a highly limber troupe that incorporates multiple trampolines and such fluid movements in their choreographed presentation that they make everything they do look effortless.  In the background, The Rage (pirate ship ride) that was present in 1981 is still there and is as popular as ever. 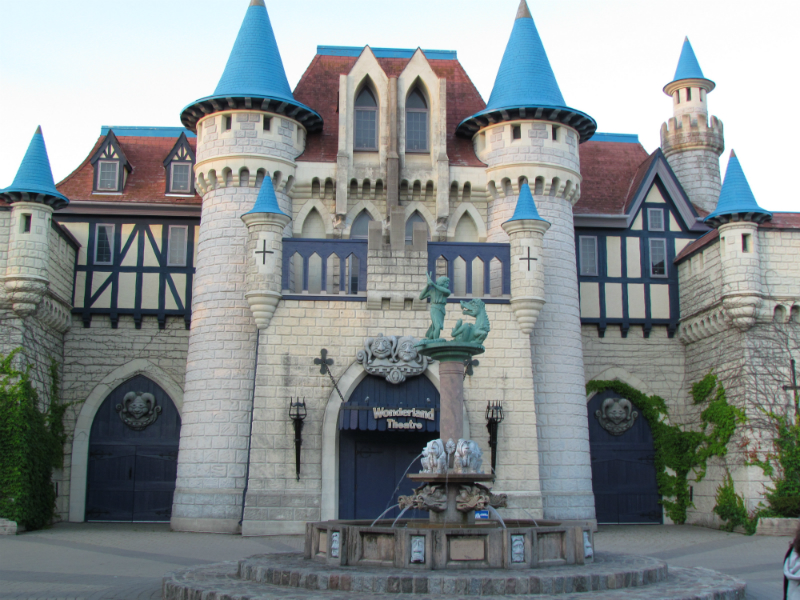 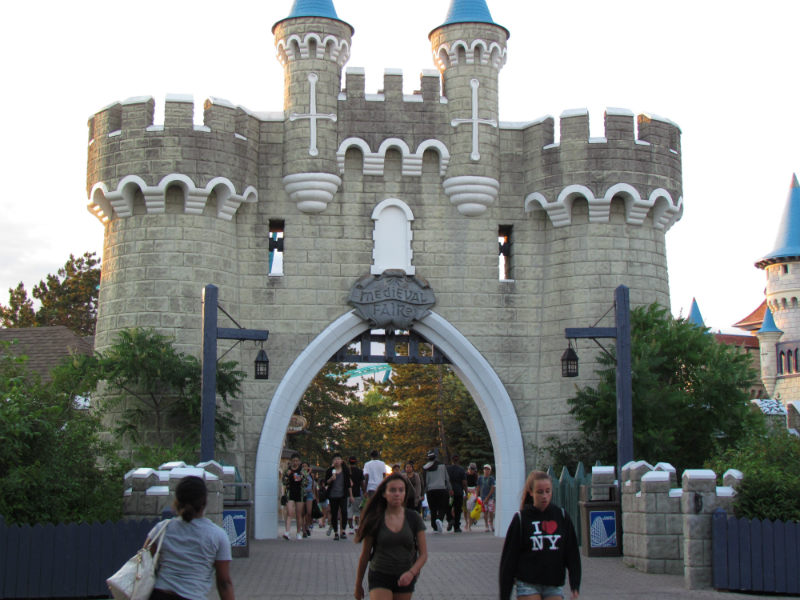 Of course, there have been some new additions along the way.  Specifically to 2016, two new rides are now installed in the park – Flying Eagles, which can be found in Kidzville, and Skyhawk, which is the first of its kind and offers riders an airplane-type setting complete with spinning wings, and features 360-degree turns and multiple inversions.  For those that aren’t daring enough to give it a try, we’ll let you in on a little secret – it’s just as interesting to sit and watch… and perhaps a little mesmerizing.

Though the roller coasters at Canada’s Wonderland may not be competitive with the ones found in Cedar Point, Ohio, they remain truly impressive and draw huge line-ups. Two of the park’s biggest and most notable coasters, Behemoth and Leviathan (standing at 229ft and 305ft respectively) give guests a smooth ride while reaching speeds of up to 148km/h (91mph). With both Behemoth and Leviathan having a 4.5 G-force, they are sure to get your adrenaline pumping.  If you venture to the park on a weekend or holiday, your best bet for shorter line-ups is first thing in the morning. 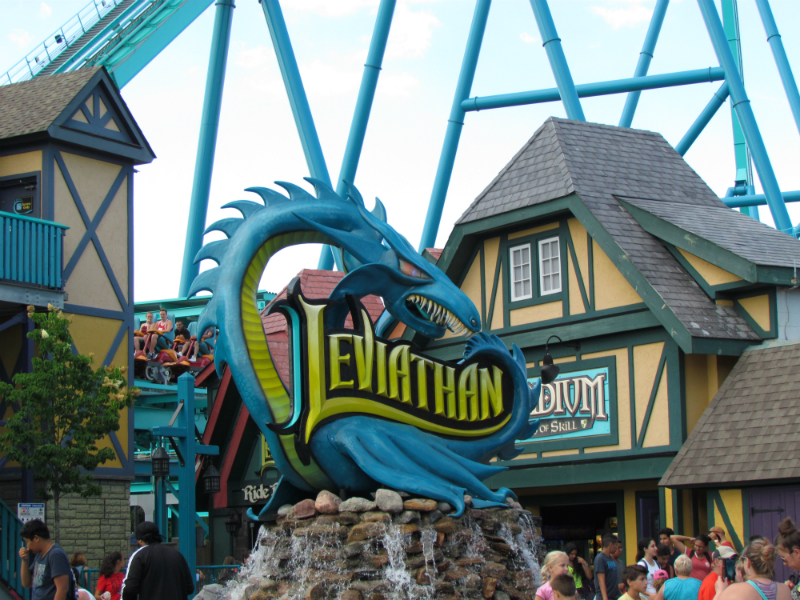 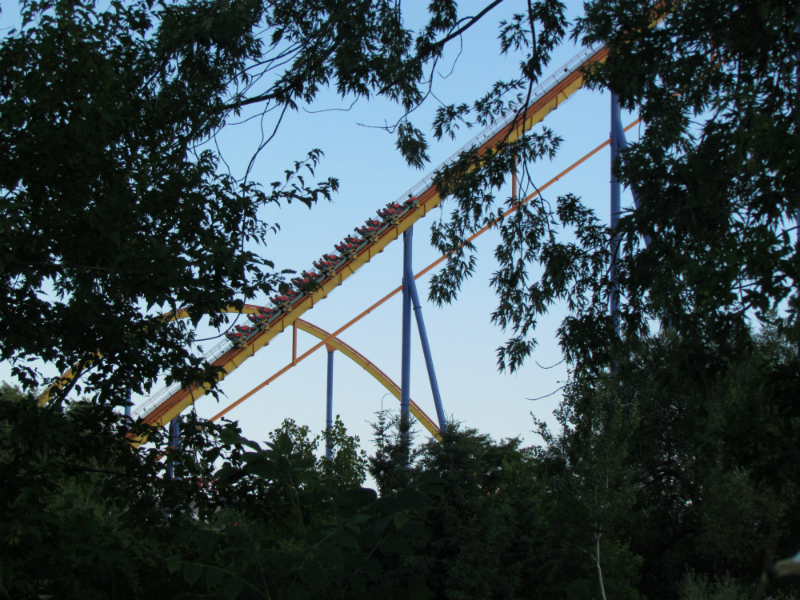 If you’re looking for smaller lines, a milder ride, and your preference is classic wooden coasters, Wonderland offers two – Mighty Canadian Minebuster and Wild Beast (88’ and 82’ feet respectively), both of which were operational when the park first opened.  Twists on the classic coaster design include Time Warp (formerly Tomb Raider) with a carry cage that has riders lie down in the prone position.  And then there is Flight Deck (formerly Top Gun) which suspends riders from the track above them, thus allowing them to ‘hang’ for the experience.  For anyone with neck and back issues, these rides can be problematic so be sure that you are fit to handle them. If you’re curious as to the title changes; both coasters were named for movies produced by Paramount Pictures.  The takeover of the park by Cedar Fair necessitated that any Paramount-related themes be removed. 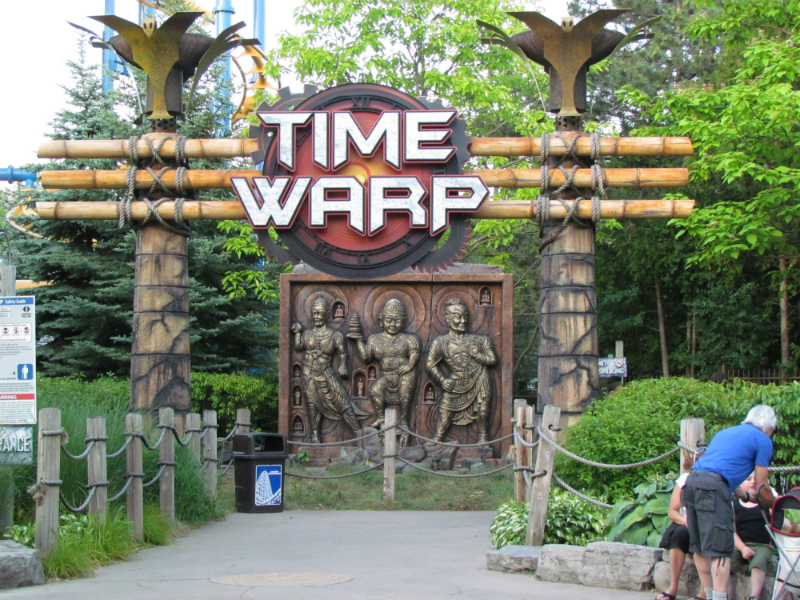 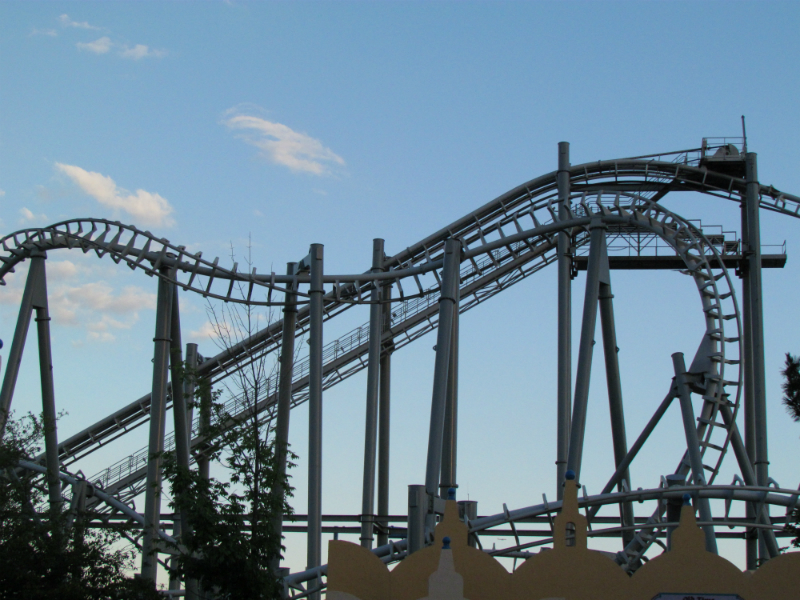 One of our personal favorites, Vortex, a suspended coaster that opened in 1991, gives riders a lightning-fast voyage over the water behind Wonder Mountain.  Despite the smooth ride, the stop at the end is abrupt and severe so be prepared for it.

If you’re looking to cool off for a while, White Water Canyon or Timber Wolf Falls both offer the perfect solution with splashing, churning water and the inevitability that you will get wet. Also good for cooling off is both of the park’s swing rides – the original which supports up to 50 riders and is located in Action Zone, and Windseeker which is an extreme version of swings and is identical to the one found at Cedar Point.  At 301 feet high, it supports 32 riders with nothing below them except their chair.  With a height almost equivalent to Leviathan and a speed that is much slower, this ride provides quite a stunning view of the park!  Line-ups for both of the swing rides tend to move quickly considering they take on a lot of people each time they run. 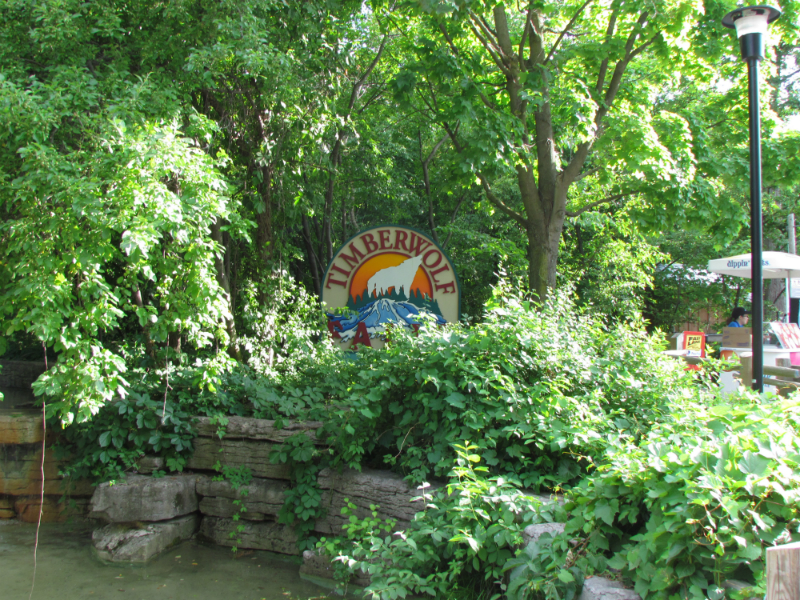 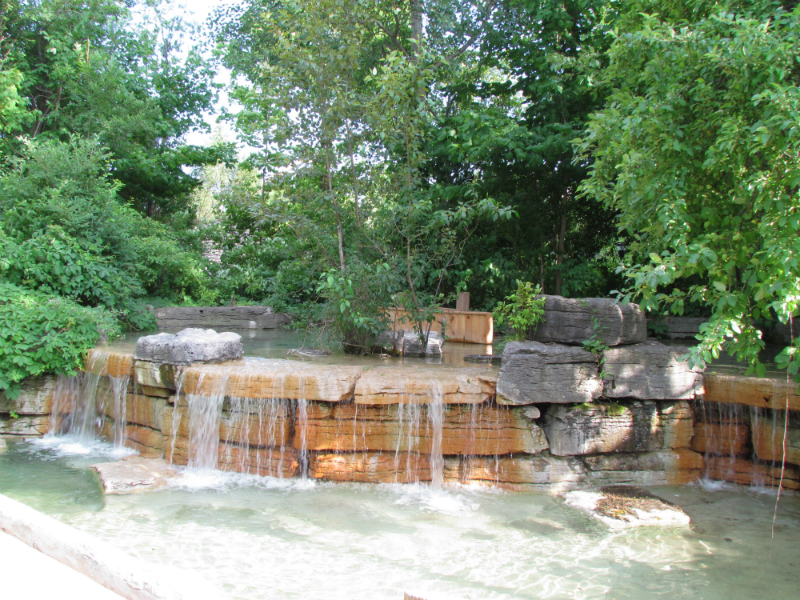 If line-ups concern you, Canada’s Wonderland now conveniently offers a smartphone app that features a map of the park, your current location, and key ride wait times (in real-time) so that you can better plan your day.  We found the app to be quite helpful.  It also lets guests know of showtimes throughout the park, which this summer includes ‘The Stars of the Peking Acrobats’, ‘Ultimate Thrill Circus’, ‘Acrodunk’ as seen on America’s Got Talent, and “Daytripper – The Beatles’ Experience’, which has a shorter engagement than the others. There are also two new kids’ shows.

Despite the app and the availability of Fast Pass and Fast Pass Plus in order to cut down on line times, we still feel that Wonderland would greatly benefit from single-rider lines as has been proven by other parks.  As well, operators should ensure that all carts are actually full before starting a ride, as we noted several rides operating with empty seats.  As for the Fast Passes, they are quite steep in price considering that admission is separate.

As with many amusement parks, Wonderland offers some extreme rides at a price over and above admission.  These include Xtreme Skyflyer, which is Canada’s largest freefall swing.  As well, there is the recently installed SlingShot which thrusts riders into the air at speeds over a hundred miles per hour. We tried both of these – they are certainly thrilling and memorable, and we can attest to the fact that they are not for the faint of heart.

Wonderland also provides guests with an arcade, several gift shops, a water park called Splash Works, and a variety of prize-centered games, as well as several choices of places to eat and plenty of seating areas.  Pizza, burgers, and hot dogs are prominent as one would expect from a theme park.  However, if you’re looking for more of a dining experience, the Marketplace International Buffet, located just inside Medieval Faire, offers guests pasta, carving stations, a dessert bar, and a selection of wines, cocktails, and beers.

Regardless of what you choose to eat while visiting Wonderland, the one thing you can’t miss is the park specialty – Funnel Cake.  Originally, this fun dessert came with strawberries only.  However, newer versions of the funnel cake include 4-Berry, Cookies ‘n Cream, and Apple Crumble.  No matter which one you choose, you’ll be delighted… and stuffed. 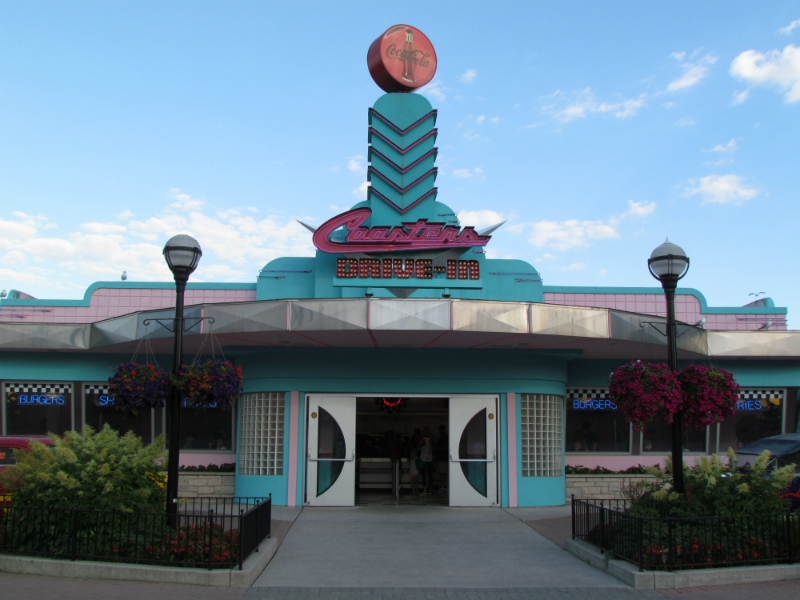 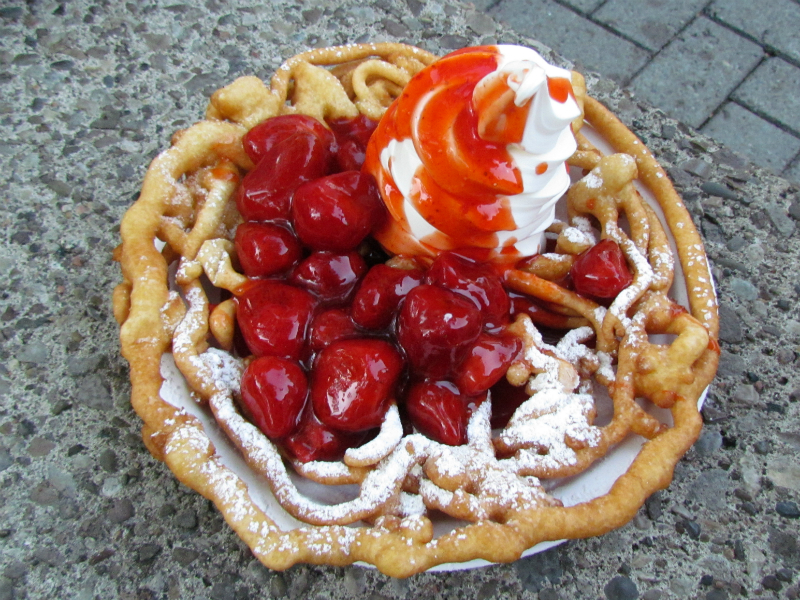 We applaud Canada’s Wonderland for their pleasant and helpful staff, and how very clean and appealing they keep the grounds.  Surely there are photo opportunities everywhere you look.  And there’s always lots of extras to do – from face painting to temporary tattoos, and from costume photos to special occasion events and displays.  It’s no wonder this seasonal park has become the most visited in North America and sees an annual guest count of 3.6 million-plus per year.  We advise that you go, check it out for yourself, and discover why they call it “Wonderland”. 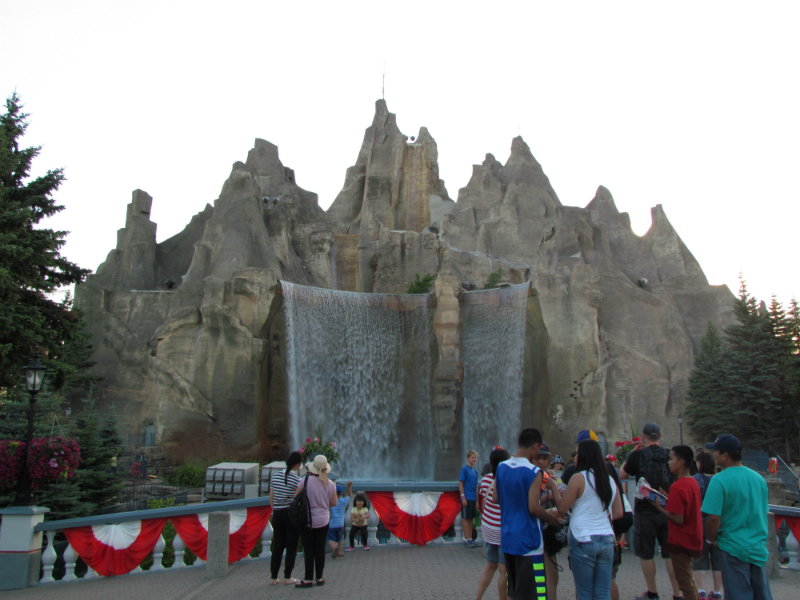 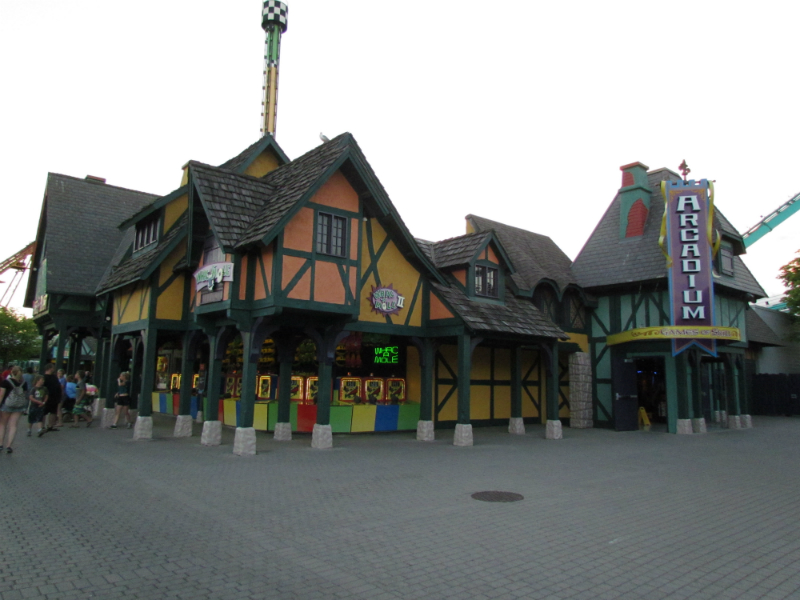 All Photos belong to Go GlobeHopper.  Please do not copy or share without credit and link back.  Thank you.