The topic of castles usually and automatically brings to mind images of massive and turreted architectural wonders strewn throughout Europe, rife with stories of epic battles and historical significance. While it’s true that some of the largest and most famous citadels are indeed in Europe and are an undeniable must-see, the fact is that North America boasts a few impressive castles of its own.

For obvious reasons, North American castles are not nearly as old as those found in Europe and none have seen a battle.  As a matter of fact, the majority of castles throughout Canada and the US are labeled as folly – costly ornamental structures with little to no purpose. But that doesn’t make them any less beautiful or interesting to visit, and some make for excellent road trips and destination ideas.

North American castles include but are not limited to Craigdarroch Castle in Victoria, British Columbia; Dundurn Castle in Hamilton, Ontario; Bannerman Castle on Pollepei Island, New York; Biltmore Estate in Asheville, North Carolina, and Lyndhurst Castle in Tarrytown, New York to name but a few.  We have a Favorite 5… as well as a bonus #6.  Here’s the rundown. The name Casa Loma is Spanish for Hill House, which is appropriate considering this architectural masterpiece sits high on a hill overlooking downtown Toronto. Originally, it was the residence of financier Sir Henry Mill Pellatt, who constructed the castle over a 3-year period, from 1911- 1914.  EJ Lennox, the architect, was renowned for many other city landmarks and chose to build the castle on a hill at an altitude of 140 meters.  The house came with a price tag of $3.5 million to build and employed 300 workers to complete the job.

With a square footage of 64,700 containing 98 rooms, Casa Loma was touted as the largest private residence in Canada and was extremely modern for its time.  Conveniences included an elevator, an oversized oven big enough to fit an ox, a central vacuum, a pool, multi-jet showers, and bowling alleys in the basements. However, of all of these interesting extras, the two secret passages are likely the most talked about. 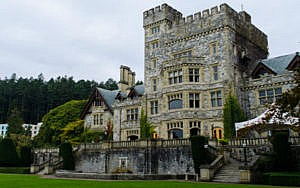 Hatley Park, located in Greater Victoria, is Canada’s largest and most diverse National Historic site, in the center of which sits an impressive castle. Built in 1908, this Edwardian structure was constructed by former British Columbia premier and coal baron, James Dunsmuir. This 565-acre estate is beautifully preserved on the southern tip of Vancouver Island, approximately half an hour from Victoria.

Visit the museum, or stroll through the heritage gardens; the Japanese Garden, the Italian Garden, and the Rose Garden. 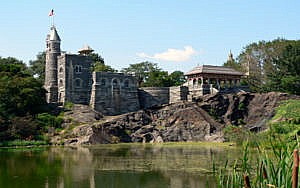 Named for the Italian meaning “beautiful view,” Central Park’s Belvedere Castle offers park goers exactly what its name implies. With its two balconies, it supplies wonderful panoramic views that include some of Central Park’s most beautiful and famous landmarks: the Delacorte Theater, the Great Lawn, the Turtle Pond, and the Ramble.

Originally designed in 1865 by Calvert Vaux and Jacob Wrey Mould, Belvedere Castle was intended to be a Victorian Folly, a fantasy structure that provides a great backdrop and views, but without a real intended purpose.  With its strong stone façade, grand turret, and flag, the castle is a stunning attraction in Central Park. 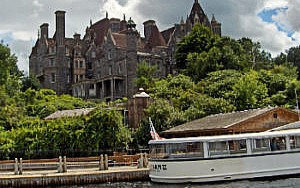 Boldt Castle is a major landmark and tourist attraction in the Thousand Islands region of the U.S. state of New York. Open to guests seasonally between mid-May and mid-October. It is located on Heart Island in the Saint Lawrence River. Heart Island is part of the Town of Alexandria, in Jefferson County.

Originally a private mansion built by an American millionaire, George Boldt, it is today maintained by the Thousand Islands Bridge Authority as a tourist attraction. 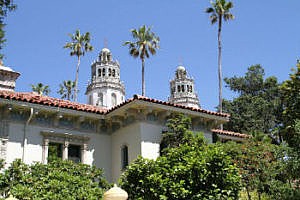 Mansions are a dime a dozen in California, with movie stars and tech power brokers building palaces and adding wings, pools, and yoga pavilions with abandon. But nothing comes close to Hearst Castle. Lavishly designed by Julia Morgan, California’s first female architect, as the private residence of publishing magnate William Randolph Hearst, the complex, completed in 1947, is an extraordinary temple to opulence and excess. Now showcased within one of California’s most visited state parks, it is a must-see to end all must-sees, an eye-popping extravaganza with a 165-room castle, 127 acres/51 hectares of terraced gardens, fountains, and pools, and, to top it all off, wraparound views of the sunny Central Coast.

It’s easy to spend a full day or more exploring the castle and its environs in San Simeon: The Central Coast town has a nice range of places to stay, from mainstream to majestic accommodations. Start your visit with one of Hearst Castle’s daily tours of the main house, or special tours of the cottages; come in November or December to see the estate dressed up in its very festive holiday décor. Top off a visit to San Simeon’s Heart Ranch Winery, co-founded by William Randolph Hearst’s great-grandson, Steve. 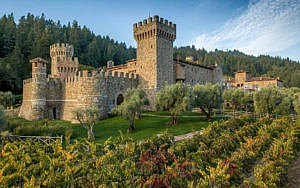 You don’t need to travel all the way to Italy to see the inside of a Tuscan castle. Castello di Amorosa, one of V. Sattui’s open-to-the-public wineries in Napa Valley, is built to precisely replicate a spectacular medieval fortress. Complete with moat and drawbridge (and even a torture chamber), Castello di Amorosa is the dream of Dario Sattui, who acknowledges that he had to be a little crazy to build his labor of love in Calistoga.

The castle boasts 107 rooms (not including the underground network of caves), and no two rooms are alike. On guided tours, look for spectacular flourishes like the hand-painted frescoes in the Great Hall. In the 12,000-square-foot Grand Barrel Room, look up to see a cross-vaulted ceiling crafted from ancient bricks while you sip award-winning Italian-style wines. Or enjoy food and wine pairings with the castle’s sommelier in the Royal Apartment, complete with a carved fireplace and hand-forged chandeliers.